Stockholm, June 5(Greenpost)–The search and rescue team has righted the capsized cruise ship in the Yangtze River following more than 12 hours of work, according to CRI. 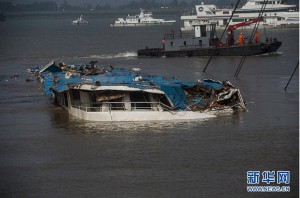 The operation started Thursday night after no more survivors were found following three days of search and rescue efforts.

The rescue headquarters says righting the ship would help find the missing people “in the shortest possible time”.

The death toll from the shipwreck stands at 97.

Only 14 people have been found alive so far.

Chinese Premier Li Keqiang has been to the rescue site twice to direct the rescue work, look at the rescued persons and the soldiers,

divers and many others.

The ship capsized within just a couple of minutes. It was too quick to

send out rescue signals.  The message was sent out after a guide swam out of the river.

The last one who was rescued out was a 65 year old lady.

Chinese army, navy and air force as well as transportation and communication ministries have all sent out people to the site.

More than 4600 soldiers and 200 divers participated in the rescue.