As the three received the prize, Kanjana Komkla said “I’m really happy but I think every team is the best! And thank you everyone.”

By examining the efficacy of natural water collection by plants – especially in terms of the shape of plants that collect and capture water – Sureeporn Triphetprapa, Thidarat Phianchat and Kanjana Komkla built a device that mimics the water retention of the Bromeliad plant. The device has also been installed on rubber trees on rubber plantations. For this, they have been awarded the 2016 Stockholm Junior Water Prize, showcasing that nature is the best teacher.

The Jury was impressed by the winners, in particular their exceptional creativity, unrelenting diligence, enthusiasm and true passion for water.

“The theme of the 2016 World Water Week is Water for Sustainable Growth. The winning project addresses future water security and rural livelihoods using an elegant leap-frog technology which looks simple, but its beauty masks its complexity! The project embodies the theme well through its journey from the idea to application,” the Jury said in its citation.

“It has already proven to be scalable and is now being tested in the field, by hundreds of farmers, who are now benefiting from the inspiration from beautiful plants which have an exceptional capacity to collect and store water.”

Asked how she would want to take the winning project further, Sureeporn Triphetprapa said: “I will use our idea to relieve poverty in our community.”

“This shows that to make real progress towards achieving the Sustainable Development Goals, we need to start at the local level. This is a very good example of that; a simple, smart and scalable solution, making a big difference”, said Torgny Holmgren, Executive Director of SIWI.

The Stockholm Junior Water Prize competition brings together the world’s brightest young scientists to encourage their continued interest in water and the environment. This year, thousands of participants in countries all over the globe joined national competitions for the chance to represent their nation at the international final held during the World Water Week in Stockholm. Teams from 29 countries competed in the 2016 finals.

Diploma of Excellence to students from Mexico

A Diploma of Excellence was awarded to the students Gabriel David Alejandro Trujillo, Eunice Yaneli Masegosa Gaona and Carlos Castellanos Dominguez from Mexico. Their project – a pilot plant – combines an artificial wetland, electrofoculation process and a purification system to promote the use of reclaim water for small agricultural activities and school uses, such as bathroom discharges and cleansing.

“This team went right ahead to build and operate the kind of system that is often researched but rarely implemented well – if at all. Their accessible, practical solution is simple. The selection of local plants, previously undervalued, has made this innovation cost-effective to implement, and at the same time scientifically sophisticated,” the Jury said. 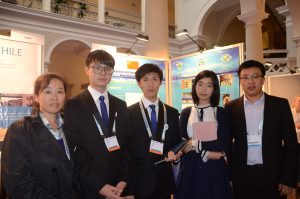 Their project was to use double supersonic  frequency to destroy and then eradicate blue or green algae in polluted water.

It was impressive that the motivation of the team was to revive the river in their hometown so that the childhood happiness of holding dragon boat competition can be resumed and further to avoid diseases for many people due to the polluted water.

When asked why he participated in this project, Zeming Zhang said,

Zhang said in the future, he hopes he can learn artificial intelligence or other environmentally related subject.

SIWI is a policy institute working for a water wise world. SIWI does independent research, generates knowledge and provides expert analysis and advice on water issues to decision-makers and other agents of change. SIWI organizes the World Water Week in Stockholm – the leading annual global meeting place on water and development issues – and hosts the Stockholm Water Prize and the Stockholm Junior Water Prize, which will be awarded during World Water Week.