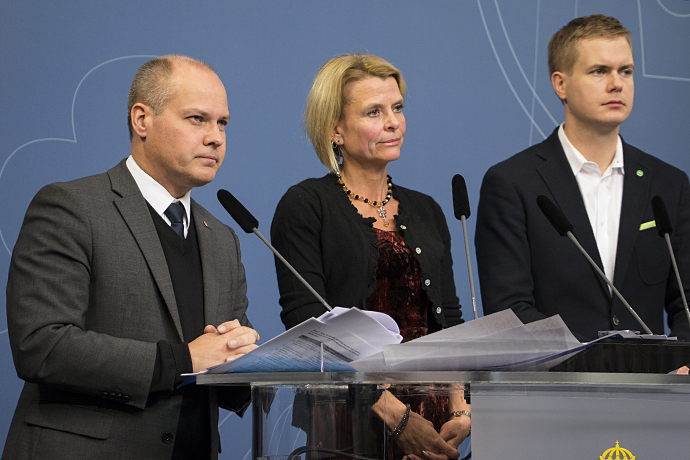 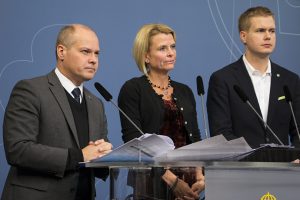 Minister for Justice Morgan Johansson, Minister for Gender Equality Åsa Regnér and Minister for Education Gustaf Fridolin at the press conference where the strategy was launched.Photo: Bill Nilsson/Government Offices of Sweden
As one of the measures in the strategy, the Government intends to amend the degree descriptions in the Higher Education Ordinance for educational programmes where it is most necessary and where students will encounter perpetrators and victims of violence in their future careers.

“People who encounter perpetrators of violence and their victims in their work must have knowledge of how violence can be uncovered and prevented, and of the most effective measures. This should therefore be included in the teaching of particularly relevant higher education programmes. This measure is part of the first long-term national strategy to combat men’s violence against women, which prioritises preventive efforts. This communication shows the Government moving up a gear in its efforts to make a difference in people’s lives,” says Minister for Gender Equality Åsa Regnér.

“So-called honour-related crimes are unacceptable. More offences must be uncovered and more must be done to prosecute the perpetrators. It must be clear that society takes a very serious view of these offences. We are therefore appointing an inquiry to investigate the possibilities of introducing honour-related motives as special grounds for tougher penalties,” says Minister for Justice Morgan Johansson.

“Many people, often young women, are now confined by a pressure to achieve that is creating growing mental ill health. Many people, often young men, lack motivation to study and faith in the future. The gender structures and norms that constrain both girls and boys must be broken; we must strengthen young people’s self-esteem and self-confidence if we are to improve school performance. This is the basis of the Government’s major investments in school health and welfare services, special needs education support, and study and vocational guidance,” says Minister for Education Gustav Fridolin.

Highlights of the gender equality communication

The communication Power, targets and agencies – a feminist policy for a gender-equal future encompasses political objectives, an organisational structure for implementation and a follow-up system. It also includes a national strategy with a programme of measures to prevent and combat men’s violence against women. The programme of measures will apply from 2017 to 2020. Parts of the strategy are based on an agreement between the Government and the Left Party.

The three national assignments concerning honour-related violence and oppression, prostitution and human trafficking for sexual purposes, and the assignment on support to authorities (including higher education institutions) for gender mainstreaming of their activities, will be made permanent.

The Government is introducing two new interim targets – gender-equal education and gender-equal health – to give these areas greater space in gender equality policy.

Focus on men’s participation and responsibility

Men’s participation is a prerequisite if a gender-equal society is to be realised. The Government intends to implement measures to strengthen the gender equality work focus on men and boys with respect to violence prevention, health and use of parental benefits.

Strategic, cohesive and long-term agency governance
During this electoral period, the Government intends to analyse which agencies’ instructions require strengthened requirements and governance with respect to gender mainstreaming.

The communication includes a ten-year national strategy on men’s violence against women, including honour-related violence and oppression, as well as prostitution and human trafficking for sexual purposes. To strengthen the prospects of achieving the interim gender equality policy target of ending men’s violence against women, the Government will focus particularly on preventive measures.