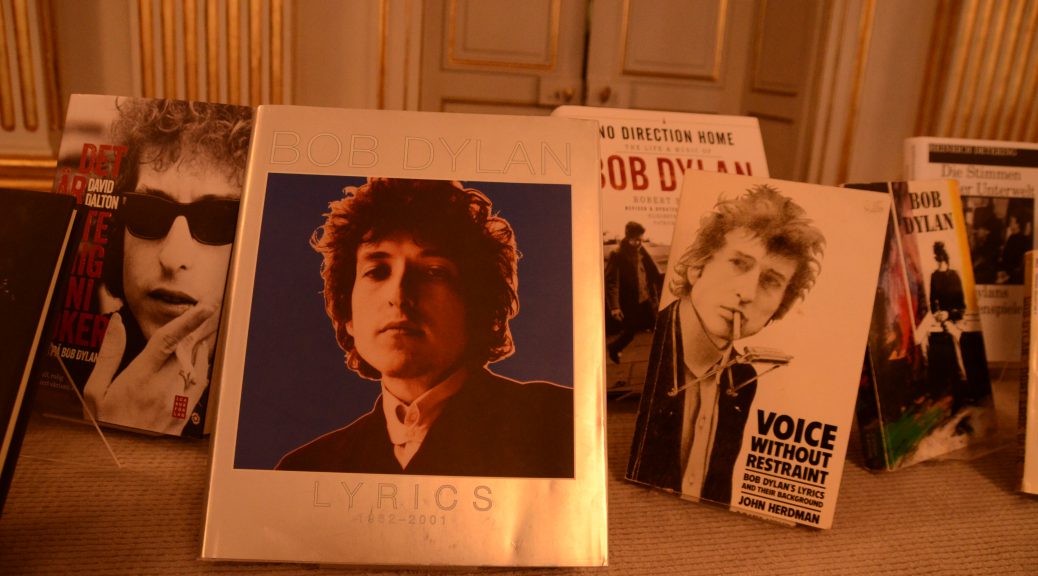 Your Majesties, Your Royal Highnesses, Your Excellencies, Ladies and Gentlemen,

What brings about the great shifts in the world of literature? Often it is when someone seizes upon a simple, overlooked form, discounted as art in the higher sense, and makes it mutate. Thus, at one point, emerged the modern novel from anecdote and letter, thus arose drama in a new age from high jinx on planks placed on barrels in a marketplace, thus songs in the vernacular dethroned learned Latin poetry, thus too did La Fontaine take animal fables and Hans Christian Andersen fairy tales from the nursery to Parnassian heights. Each time this occurs, our idea of literature changes.

In itself, it ought not to be a sensation that a singer/songwriter now stands recipient of the literary Nobel Prize. In a distant past, all poetry was sung or tunefully recited, poets were rhapsodes, bards, troubadours; ‘lyrics’ comes from ‘lyre’. But what Bob Dylan did was not to return to the Greeks or the Provençals. Instead, he dedicated himself body and soul to 20th century American popular music, the kind played on radio stations and gramophone records for ordinary people, white and black: protest songs, country, blues, early rock, gospel, mainstream music. He listened day and night, testing the stuff on his instruments, trying to learn. But when he started to write similar songs, they came out differently. In his hands, the material changed. From what he discovered in heirloom and scrap, in banal rhyme and quick wit, in curses and pious prayers, sweet nothings and crude jokes, he panned poetry gold, whether on purpose or by accident is irrelevant; all creativity begins in imitation.

Even after fifty years of uninterrupted exposure, we are yet to absorb music’s equivalent of the fable’s Flying Dutchman. He makes good rhymes, said a critic, explaining greatness. And it is true. His rhyming is an alchemical substance that dissolves contexts to create new ones, scarcely containable by the human brain. It was a shock. With the public expecting poppy folk songs, there stood a young man with a guitar, fusing the languages of the street and the bible into a compound that would have made the end of the world seem a superfluous replay. At the same time, he sang of love with a power of conviction everyone wants to own. All of a sudden, much of the bookish poetry in our world felt anaemic, and the routine song lyrics his colleagues continued to write were like old-fashioned gunpowder following the invention of dynamite. Soon, people stopped comparing him to Woody Guthrie and Hank Williams and turned instead to Blake, Rimbaud, Whitman, Shakespeare.

In the most unlikely setting of all – the commercial gramophone record – he gave back to the language of poetry its elevated style, lost since the Romantics. Not to sing of eternities, but to speak of what was happening around us. As if the oracle of Delphi were reading the evening news.

Recognising that revolution by awarding Bob Dylan the Nobel Prize was a decision that seemed daring only beforehand and already seems obvious. But does he get the prize for upsetting the system of literature? Not really. There is a simpler explanation, one that we share with all those who stand with beating hearts in front of the stage at one of the venues on his never-ending tour, waiting for that magical voice. Chamfort made the observation that when a master such as La Fontaine appears, the hierarchy of genres – the estimation of what is great and small, high and low in literature – is nullified. “What matter the rank of a work when its beauty is of the highest rank?” he wrote. That is the straight answer to the question of how Bob Dylan belongs in literature: as the beauty of his songs is of the highest rank.

By means of his oeuvre, Bob Dylan has changed our idea of what poetry can be and how it can work. He is a singer worthy of a place beside the Greeks’ ἀοιδόι, beside Ovid, beside the Romantic visionaries, beside the kings and queens of the Blues, beside the forgotten masters of brilliant standards. If people in the literary world groan, one must remind them that the gods don’t write, they dance and they sing. The good wishes of the Swedish Academy follow Mr. Dylan on his way to coming bandstands.