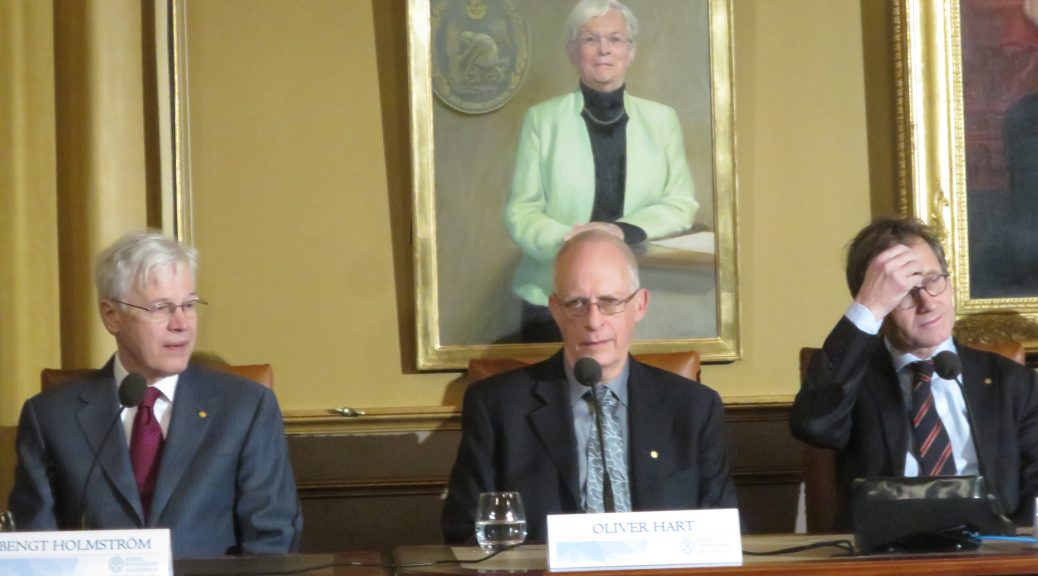 Presentation Speech by Professor Per Strömberg, Member of the Royal Swedish Academy of Sciences, Chairman of the Nobel Committee for the Prize in Economic Sciences in Memory of Alfred Nobel, 10 december 2016.

Your Majesties, Your Royal Highnesses, Esteemed Laureates, Ladies and Gentlemen,

At the edge of the Mediterranean − outside today’s Izmir, Turkey − the Greek city of Teos was located in ancient times. During recent excavations of that city, archaeologists discovered a 1.5 meter high white marble stele, with a fifty line long chiselled inscription. The stele turned out to be a 2,200 year old lease agreement for a property including buildings, farmland and associated slaves.

A wealthy man in Teos had donated the property to a nearby gymnasium, but the students – who were busy with their studies and sports – leased it out to the highest bidder. One clause in the detailed agreement gave the owners the right to inspect yearly whether the tenant was keeping the buildings in good repair and taking good care of the farmland. More than half of the lines of the inscription listed the extra fees and penalties that could be charged to the tenant in case of a breach of contract. The agreement also gave the owners the right to hold religious ceremonies on the property three days per year; this not only provided the students with spiritual sustenance, but also made their rental income tax-free.

In other words, even the ancient Greeks had written contracts with each another. In today’s society, contracts are even more important. We enter into job contracts with employers and loan contracts with banks, and we buy insurance to protect ourselves against theft and accidents. The most successful of us can write wills including provisions that are maintained for more than a hundred years … Contracts may be long and full of fine print. But they can also be simple or implied, such as the weekly allowance we promise to give our children if they clean their rooms. Contracts also regulate non-economic relationships at all levels of society: from marriage to constitutional laws to international treaties.

Contracts can make us think of unpleasantness and arguments. The tenant in Teos had to accept stringent clauses and threatening sanctions. Yet the fundamental aim of contracts is cooperation. A well written agreement creates a golden compromise between parties with partly divergent interests.

Entering into agreements is a difficult art. Poorly designed agreements can lead to deception and unnecessary conflicts. Well-drafted contracts, however, encourage each party to act in a way that benefits everyone. This year’s Prize in Economic Sciences is being awarded for theories about writing good contracts.

Contracts usually specify payments for certain behaviours or outcomes. Bengt Holmström’s work examines both the benefits and drawbacks of such economic rewards. A variable salary can cause us to become more goal-oriented and to work harder. But it can also make us assume excessive risks, focus on the wrong things and become less enthusiastic about our work. Holmström has also shown how contracts should be adjusted when the parties will be working together over a long period of time, and how good agreements can encourage an individual even though only team performance can be observed. One common denominator is that contracts must be balanced and adapted to the specific situation.

The future is often too complex and unpredictable for a contract to be able to describe all conceivable circumstances. In that case the contract can regulate who has the right to make decisions in what situations. Oliver Hart’s research on incomplete contracts deals with how decision making rights should be allocated. Among other things, his works provide us with a rich theory of property rights. Perhaps it would have been better for the students in Teos if they had sold their property to the tenant and saved themselves the trouble to carving out fifty lines of ancient Greek text in marble. Hart’s toolkit can be used to understand whether two companies should merge, how to design an effective bankruptcy law and whether to operate a particular welfare service in the private or public sector.

Dear Professors Hart and Holmström:
The blossoming field of contract theory stands firmly on the shoulders of your contributions. With the tools of this theory, we can better understand many real-world contracts and contractual institutions. More importantly, your work helps us write better contracts to enhance cooperation and welfare.

Your research is an outstanding example of practically useful theory, in the best sense of the term. It is an honour and a privilege to convey to you, on behalf of the Royal Swedish Academy of Sciences, our warmest congratulations. I now ask you to receive your Prizes from His Majesty the King.