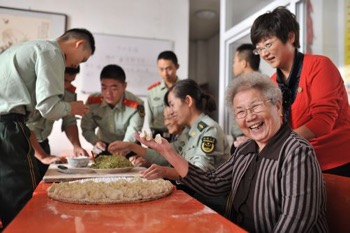 By Li Ning from People’s Daily

Stockholm, March. 6(Greenpost)–By further streamlining administration and delegating power, strengthening supervision and improving the service level, China will mobilize social forces to participate in the development of elderly care industry, lower the institutional cost for entrepreneurship and create a fair development environment, according to a policy paper released by relevant Chinese authorities recently. 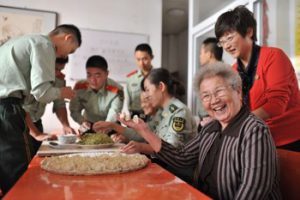 On Oct. 8, 2016, the day before China’s traditional Double Ninth Festival when people show respect to the elderly, resident troops made dumplings and watched shows with senior citizens at a nursing home in Qingdao, Shandong province. (Photo by People’s Daily)

The Notice on Accelerating the Reform on the Entry, Supervision and Service Level of the Senior Service Industry was released by thirteen departments, including Ministry of Civil Affairs, National Development and Reform Commission, Ministry of Public Security, Ministry of Finance, Ministry of Land and Resources and National Elderly Work Committee Office.

Now entering into an aging society, China has huge demands for the elderly nursing industry. In 2015, the number of senior aged over 60 in China reached 220 million, accounting for 16.1 percent of the total population.

However, the sheer quantity and quality of China’s senior service supply still fall short of the increasing demand for the industry. China is now still headache with inaccessibility of urban and rural public facilities, as well as insufficient supply of senior products.

Other than a livelihood project involving the welfare of billions of people, the senior service industry is also a rising business with great potential.

At the end of last year, the Chinese State Council released a guideline on widening the access of the senior service market and improving the quality of senior service, requiring the service to orient towards community, rural areas as well as incapacitated and semi-incapacitated senior citizens.

Nursing care resources should be further expanded and the development of small-sized and professional chain service agencies should be vigorously supported, read the guideline.

Small-sized community nursing homes are encouraged to meet the needs of senior citizens within close proximity as well.