By Qiang Wei from People’s Daily

STOCKHOLM, March6(Greenpost)–China’s bike-sharing industry has embraced an explosive growth since last year. Data showed that by the end of last year, millions of bikes offered by over 20 bike-sharing companies have expanded their service to nearly 19 million users. 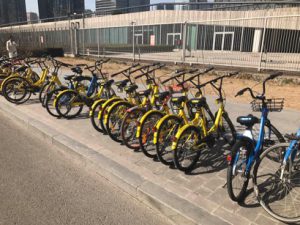 The bike-sharing service enables users to find, unlock and pay to rent the bicycles through a smartphone app. Mobike and Ofo are among the two largest of a growing crop of private bike-sharing operators.

Ofo, the company behind the yellow two-wheelers, announced on 1st March that it has raised 3.1 billion yuan ($450 million) in a fresh round of funding. It not only represents the largest single deal in terms of fund raised by a bike-sharing firm, but also swells the firm to the industry’s richest unicorn, a start-up company valued at over 1 billion dollars.

Public bike is not a fresh thing. Many Chinese cities have launched public bikes previously to meet the citizens’ demands for the “last mile” of public transportation, but congested public space and complicated procedures restrained the pace of such efforts.

Unlike the services provided by local governments, users of the newly emerging shared bikes like Orange-hued Mobike can find and pay for bicycles via a smartphone app and then leave them wherever they want. The location of the bike will be recorded by the data platforms, so that the next users can find one easily.

The economical and convenient service also responds to China’s call for green, energy-saving transportation, attracting a host of fans due to its convenience and low price.

These bikes, a combination of sharing-economy, high-technology and market demands, also provide the outside world a glimpse into China’s huge potential in sharing economy.

PwC’s projections show that five key sharing sectors—travel, car sharing, finance, staffing, and music and video streaming—have the potential to increase global revenues to around 335 billion dollars by 2025, over 20 times higher than the number in 2016.

The latest report released by McKinsey & Company on China’s sharing economy revealed that shared transportation is gaining wide popularity in the Chinese market, while office space and technology sharing is rising.

So far, China’s sharing economy is applied in transportation, office space, skills and finance, while segment fields including car-hailing, bike-sharing, car-sharing and apartment-renting are growing in a faster pace. 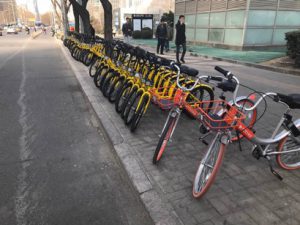 Shared bikes are lined up outside a subway entrance in CBD in Beijing. (Photo by Qiang Wei from People’s Daily)