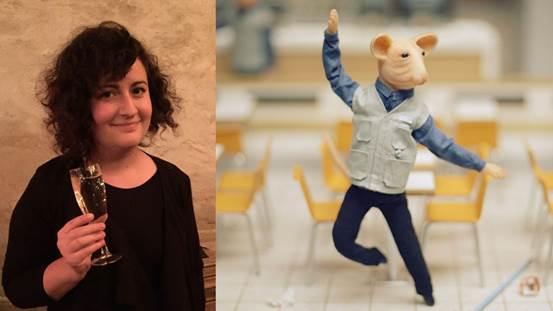 STOCKHOLM, June 18(Greenpost)–Niki Lindroth von Bahr has been awarded a Cristal, the highest accolade at Annecy in France, the world’s leading animation festival, for her animated short film, The Burden.

– The Annecy International Animated Film Festival is number one in the animation world, and hence the competition is world class. Over the course of the week, I have received a great deal of positive feedback about The Burden, proof that it has made a strong impression. Being awarded the top prize is a great success for Niki, and hopefully it can inspire the Swedish film world to delve even deeper into the field of animation,’ stated Anna Serner, CEO of the Swedish Film Institute.

– I am so incredibly happy! I hope this type of recognition enables me to work with longer format films in the future. For my next project, I would like to make an animated horror film set in the finance world,’ Niki Lindroth von Bahr explains.

Just a month ago, Niki Lindroth von Bahr attended Cannes, where The Burden was competing in the Quinzaine des Réalisateurs section. Screened earlier this year at the Gothenburg Film Festival, where it won the Best Swedish Short Award (Startsladden), The Burden was also voted the audience favourite in the short film category.

The Burden was produced by Kalle Wettre of Malade Aktiebolag, with support from the Swedish Film Institute’s prior short-film commissioner Andreas Fock.

Niki Lindroth von Bahr, born in 1984, is a trained scenographer and creates the props for her own films.  She has previously directed short films One Night in Moscow (2008), Tord and Tord (2010) and Bath House (2014). Her films have been screened at festivals such as Sundance, Berlin and Annecy and she has received awards for her shorts at film festivals in Chicago, Rio de Janeiro, Brussels, Abu Dhabi, Fredrikstad and Baden, among others. In addition, she created the puppets for Johannes Nyholm’s Las Palmas, which screened at Quinzaine des Réalisateurs in 2011.