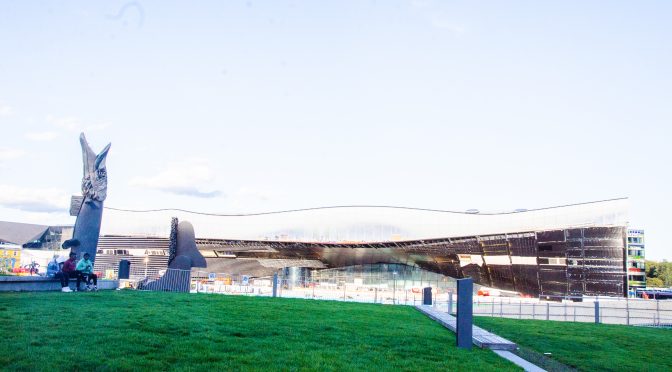 By Xuefei Chen Axelsson
STOCKHOLM， Oct. 13(Greenpost)– The Arctic Environment Ministers’ meeting held in Rovaniemi 11-12 October ended with discussions about cooperation in addressing climate change, protecting biodiversity and preventing pollution in the Arctic region.
The two-day meeting brought together ministers and high-level representatives from the eight Arctic Council States and from six Permanent Participants representing the indigenous peoples of the Arctic. The Observer countries and organisations of the Arctic Council had also been invited.

Many participants noted with grave concern the rapid ongoing changes in the Arctic confirmed by the Intergovernmental Panel on Climate Change Special Report on Global Warming. The IPCC acknowledges that the Arctic is warming two to three times faster than the global average. Many countries presented their national actions, including plans to speed up the reductions of the greenhouse gas and black carbon emissions as well as reducing emissions through innovation. Observer states were invited to strengthen their actions to reduce black carbon emissions. The need to increase cooperation on adaptation in order to strengthen the resilience in changing climate was discussed.

Participants welcomed the Agreement to prevent unregulated commercial fishing on the High Seas of the Central Arctic Ocean signed on 3 October in Greenland. In order to strengthen ecosystem resilience in changing conditions, measures and mainstreaming are needed to promote ecosystem-based approaches to management, and conservation and sustainable use of biodiversity; cooperation to develop a network of marine protected areas (MPAs) in collaboration with indigenous peoples and reduce marine plastic litter was highlighted by many. It was noted that international cooperation is needed to address long-range pollution that ends up in the Arctic region, including new emerging contaminants. The need to strengthen and sustain Arctic monitoring and observations, and use the best available scientific and Indigenous knowledge was discussed.

“On behalf of Finland’s Chairmanship, I wish to thank the Member States, Permanent Participants and Working Groups of the Arctic Council for their valuable inputs in preparing for this meeting and what we have now achieved”, said the Minister of the Environment, Energy and Housing, Mr. Kimmo Tiilikainen. Finland also announced its support for international and regional collaboration on reducing black carbon emissions. The preparation of the summary of the meeting by the Finnish Chairmanship will continue in cooperation with the Arctic States and Permanent Participants.