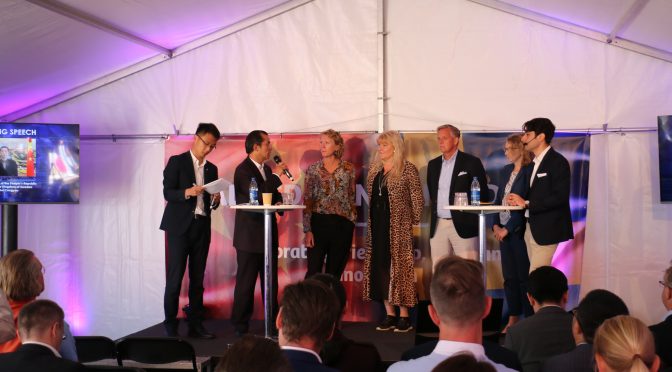 “With the develpment of China and  deepening exchanges between China and Sweden, the Swedish public is more interested to learn more about China. With a “China Day” event like this, the two sides can conduct dialogues and communication to increase objective mutual understanding. This is particularly important. To observe China, one cannot use binoculars or magnifying glasses, still less should one use colored glasses, rather one needs to see China with his or her own eyes and an open mind, and see a real, multifaceted and complete China. Today’s “China Day” event is to provide friends from all sectors in Sweden a window to know more about China, build greater common grounds and facilitate cooperation,” said Gui.

Gui further illustrated that China’s development is not just about economic growth, but an all-round social development of the country. The all-round development of China helped to lift nearly 800 million people out of poverty. The largest universal health care and social security systems in the world were built, and nine-year free education now covers every student. Per capita income grew at an average annual rate of 7.4%, creating the largest middle-income group in the world. We work to build socialist democracy, develop and improve consultative democracy, and fully protect the extensive and tangible rights and freedoms of the people.

Gui said that China’s development is not just about national strength, but about peaceful development. Expansion is not in China’s DNA. China has never started a war or conflict, and never invaded one inch of territory of other countries. China’s development will not pose any threat to any country.

China’s development is not just the development of itself, but development together with the world. China’s economic growth has been contributing over 30% to global growth for many years in a row, making itself an anchor and engine for global growth and a key contributor to the implementation of 2030 Agenda for Sustainable Development of the UN. China has been actively pursuing the joint building of the Belt and Road Initiative, with a central goal to strengthens interconnectivity, which mobilizes more resources, opens more market room and unleashed more dynamism for the development of countries along the route. The initiative is widely welcomed and supported by the international community.

The world is amid changes unseen in 100 years. Profound shifts are occurring in strengths of countries and economic development models, and another cycle of technological innovation gathers momentum. At the same time, surging unilateralism and protectionism erode the mutual trust and coordination among countries, and lead to greater risks and uncertainties in world economy. No one will win from a trade war. It severely damages the multilateral trading system, the confidence of global market and directly threatens world economic growth including that of Europe and Sweden. The Chinese side agreed to continue trade talks with the US side with sincerity, but such talks should be based on an equal footing and mutual respect, and with a purpose to address the legitimate concerns of each other. On issues concerning China’s sovereignty and dignity, China will resolutely safeguard its core interests. We are willing to follow the principle agreement reached by the two Presidents, work with the US to restart the trade consultations based on equality and mutual respect, manage differences and expand cooperation. We are ready to join hands with all countries that are committed to multilateral trade system and open development, to oppose protectionism, unilateralism and economic bullying, and stand up for fairness, justice and the fundamental interests of countries in the world, Ambassador Gui said.

What does a richer and stronger China mean for Sweden? The key words are opportunities and cooperation. China’s development will not pose any threat to Sweden, but will only bring bumper opportunities for cooperation. We are willing to develop friendly relations and cooperation with Sweden with good will, sincerity and friendship. The Chinese people often say that kindness needs to be returned tenfold, which means that when other countries treat China well, we will only treat them better.

Ambassador Gui said that China and Sweden enjoy traditional friendship. Without any historical baggage or conflicting interests, we have good conditions to develop our bilateral relations. China and Sweden share similar development philosophies. Our economies are highly complementary and there is great cooperation potential. China is working to implement the new development vision of innovative, coordinated, green, open and shared development. Sweden, as the first country that proposed the concept of sustainable development, leads the world in green, innovative and sustainable development. We are each other’s largest trading partner in the Nordic region and in Asia. Last year, trade between China and Sweden reached USD 17.15 billion, hitting a new record. In the past two years, Sweden has maintained trade surplus with China, which we welcome. We are willing to further expand importation from Sweden, and we will not fight a trade war with Sweden. We need to continue to advance our traditional cooperation in trade. We also need to actively explore more common areas of ideas and interests, and explore new cooperation fields.

We welcome various sectors of Sweden to participate in the Belt and Road Initiative, strengthen dialogue and communication, synergize our respective strengths, explore cooperation that is bilateral, trilateral or even among more parties, and inject new momentum into China-Sweden practical cooperation. In November this year, China will host the second International Import Expo, and we welcome the participation of Swedish friends in the event, concluded Gui.

Almedalen Week is a week that politicians voice their policies and debate about their opinions.

This was the second year that Ambassador Gui attended the week. Last year he was interviewed by several Swedish mainstream media.

Many people said this Chinese Ambassador is different from the previous ones. It is true. Maybe the biggest difference is that this Ambassador works much harder and is willing to go to the Swedish public and talk with people. He likes to communicate with the media, the public and the entrepreneurs, whoever is interested in China.

He said his job here was just to represent a real China and to those who got the wrong facts, he also dared to speak up and correct. He represents a new generation of Chinese diplomats who were born during the 1960s and optimistic about the future and the world.

Photos from the Chinese Embassy.

“With several trade disputes going on, it is even more important than before to defend the multilateral rules-based trading system. Poor developing countries are the biggest losers in the face of growing protectionism,” stressed Minister for Development Cooperation and Foreign Trade Ville Skinnari in his statement at a World Trade Organization meeting in Geneva on Wednesday on 3 July.

“Helping the least developed countries to benefit from open foreign trade and to seize its opportunities is fundamental to Aid for Trade. Trade plays an important role in that it enables developing countries to attain the goals of an independent economic growth and sustainable development,” Minister Ville Skinnari said.

As a positive example, Skinnari mentioned the African Continental Free Trade Agreement (AfCFTA), which entered into force recently. According to the Minister, trade policy questions and support for the economic integration of Africa will be given a central role in Finland’s forthcoming Africa strategy.Finland will bring women entrepreneur into the spotlight

This is the 7th Global Review of Aid for Trade. The meeting will discuss developing country economies’ diversification opportunities and the results of Aid for Trade. Approximately 1,500 delegates from member governments and international trade and development organisations will attend the meeting.

Finland will organise two side events on entrepreneurship, trade and women’s position during the review meeting. Businesses led by women both strengthen human rights and benefit the economy. Thanks to the She Trades initiative launched by the International Trade Centre (ITC), which Finland supports, three million women entrepreneurs will have entered the markets by 2021.

STOCKHOLM, July 3(Greenpost)– According to Finlands government, Finland will celebrate the opening of its Presidency of the Council of the European Union with a free summer party in Töölönlahti Park on 8 July.

Europe Information of the Ministry for Foreign Affairs, the Prime Minister’s Office, the European Commission and the European Parliament invite all comers to enjoy a summer day of informal EU-themed events in Kansalaistori (Citizen’s Square).

Finland and the European institutions will join forces to host the “EU playing field” tent, where citizens and decision-makers will meet to discuss the presidency and the European Union. Some more laid-back activities will also be on offer in the tent: play table football or get your face painted in biodegradable glitter colours. The tent will be open from 11.00 to 20.00.

Finland has picked climate change, one of the presidency priorities, as the party’s climactic theme: Plastic Mama, a work of enviromental art byKaisa Salmi, will be mounted in Kansalaistori Square. Made of recycled plastic by the artist and a thousand volunteers, Plastic Mama is a baroque dress that will soar to a height of ten metres.

Here are just some of the other things to do at the summer party in Töölönlahti Park: enjoy a picnic, play backyard games, try out your dance moves, tie a bouquet of flowers or a birch switch for the sauna. Highlights also include music performances and the opening of a junior football tournament, the Helsinki Cup.

The presidency will also feature prominently at SuomiAreena, a public debate forum in Pori (15–19 July) and at the Europe Forum in Turku (29–31 August).