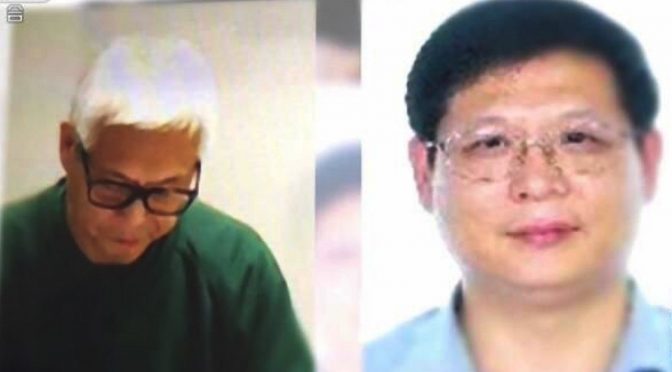 STOCKHOLM, July 4(Greenpost) — Recently when I heard Kina from a news watched by my husband, I was attracted to it and had a look at the news. Then I replayed it with his computer and got to know that Qiao Jianjun was arrested because America wanted him.

It is really interesting to see this news and think of Swedish Supreme Court and Police behaviour.

Earlier, I saw the picture that Qiao was arrested again and he said he got evidence and he denied all the accusations.

Who is Qiao Jianjun? Greenpost reported in early report that Qiao was suspected to be the No. 3 out of 100 wanted suspects by the Chinese Police. These 100 wanted suspects were accused of corruption crimes and huge amount of embezzlement or appropriation of public money. Most of them used to work in the State owned enterprises.

So far, 55 of them have gone back to China to surrender either willingly or being extradited and have experienced fair trial according to China’s judicial procedures.

Qiao was suspected to be the one who worked in Henan Branch of China’s Food Group, a key state owned corporation. He was accused to have taken 300 million yuan to escape to America in 2011. His ex wife Zhao Xiaolan divorced him in 2001 and later went to America and bought a lot of properties including a villa, a shop and others.

Qiao changed his name and married again and came to Sweden in 2011 according to reports. After long time investigation, Chinese police was almost certain that he was Qiao, the suspect they were looking for and informed Swedish police hoping that they would cooperate to crack down on crimes.

Swedish police arrested Qiao last year and kept him in detention. But on June 19th, the Supreme Court decided to set him free. According to reports from the Swedish and international media that the action had something to do with the Hong Kong situation where the students were against the revision of law to extradite suspects to the place where they had criminal actions.

It was reported that the revision of the law in Hong Kong was caused by a case between Hong Kong and Taiwan which saw the loopholes in the law. According to Chinese Foreign Affairs Ministry briefing, the case refers to Mr. Chen from Hong Kong Killed his girlfriend in Taiwan. Taiwan side wanted Mr. Chen to be extradited to Taiwan, but the two sides had no agreement or treaty on this issue. Thus Hong Kong SAR decided to revise the law involving the mainland, Hong Kong and Taiwan so that they got an agreement.

Analysts guess that maybe because Hong Kong does have a lot of suspects who are wanted by the mainland, they are so afraid of this law being passed. Thus they especially are against the revision to send the suspect to China’s mainland. Otherwise why does the slogan only focuses on the part to extradite to the mainland?

It is also suspected that behind the students there are some forces who could be just those suspects or the suspects supporters. They provided students with money and one American man even encouraged the students to challenge the police with violence.

This man was dug out with internet information as a so called human rights teacher in the mainland and later was expelled out by the Chinese Authority. He mainly taught the students how to demonstrate and how to deal with the police and instigated violence.

No one knows who is exactly behind the scene, but openly one can read British Foreign Affairs Ministry’s statement indicating support or voicing sympathy with the students. It is also known that one of the leaders of the students is still the one who led the paraply movement a couple of years ago.

Swedish reporter Petersson also reported that the students demonstration in Hong Kong was more violent than before. It was not peaceful demonstration any more. It is more antagonism in the action which violated current law of disturbing the public order.

Ok, with such a background, Swedish Supreme Court decided to set Qiao Jianjun free. This was very strange. The second strange thing was that the Supreme Court hasn’t given a written verdict yet. But the person was just set free.

Then, on June 24th, SVT reported that Qiao was arrested again because America wanted him. Qiao was accused by American police that he was suspected to conduct money laundry for 100 million. Therefore he was wanted to be extradited to America.

Now it is even more strange that Swedish court and police refused to cooperate with Chinese police but obey the American police immediately.

Why? I don’t know why. But I guess that shows Swedish police listens more to America than to China. Similar to that British little brother must obey American big brother otherwise, America will cut off your milk supply(trade link).

After my Chinese version of article was published, one reader said either to China or to America, but just not stay in Sweden at large.

Analysts hold that Sweden shouldn’t behave as if she likes to harbor criminals. It is better to extradite Qiao back to China so that he could get a fair trial. If you admit the crime and sincerely regret your behaviour , compensate all the losses, there should be consideration of reducing the penalty.

As far as I know(I used to have a student who studied English with me and worked in China’s Supreme Procuratorate ), China has tried its best to restrict death penalty.

One example of a case in 2000, Erwei was killed by his neighbour with a knife. Erwei was just 25 years old. The neighbour was 60 years old. Both held a knife from the kitchen, the young was running out of the door and the older chased him. Then the young got stuck by a stick and he fell down on the ground. The older man cut him on the ankle of the foot. When he was sent to the hospital, Erwei died of over bleeding.

Such tragedy should have been avoided if our society was more civilised. But unfortunately it happened due to little chore(poverty). According to the criminal law, if you kill someone, you should be punished to be killed. This was believed by Erwei’s relatives too. But the court didn’t sentence the elder man to death penalty immediately, but to execute after two years. That usually means the man will be life imprisonment but not be killed.

Erwei’s mother was not satisfied with the sentence and shangfang or visited upper level of court for many years. Later, she got what she wanted. That was the school fees and living expenses for Erwei’s daughter till 18 years old. At that time the girl was just 5 years old.

This case reflected the situation in China that many people were still struggling with the food and clothes in 2000. Meanwhile, the court tried according to the facts and even with purposely killing crime, since Erwei held a knife too, the other was not sentenced to death.

My student said the court or procuraterate usually dealt with the case with humanitarian concerns. The dead has died, the most important thing is for those who live to have a better life. Therefore, they often try to get more compensation for the victim instead of just getting the other being sentenced to death(meaning not to die).

China used to have very severe punishment for criminal crimes. But after reform and opening up, more and more economic crimes appeared while the so called hooligan crime cases decreased because people were more open than before.