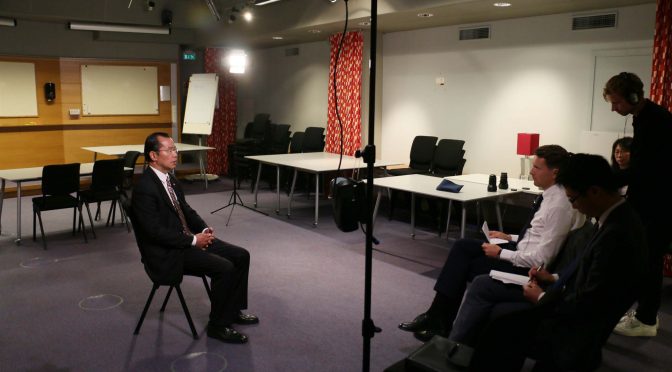 On 5 September, during an interview with SVT journalist, Ambassador Gui Congyou expressed China’s solemn positions on the current situation in Hong Kong.

Ambassador Gui said, a “Hong Kong separatist came to Sweden yesterday to propagate “Hong Kong independence”, and a few Swedish people joined her in a gathering and provided platform and support for her propaganda, which we firmly oppose. “Hong Kong independence” severely violates the Constitution of the People’s Republic of China and the Basic Law of Hong Kong, and challenges the red line of the “one country, two systems” principle, which the nearly 1.4 billion Chinese people, including Hong Kong residents, strongly oppose. The “Hong Kong independence” rioters stormed the Hong Kong Legislative Council building, desecrated the national flag and emblem of China, assaulted police officers, tourists and journalists. Their violent behaviors have gone far beyond the scope of free expression of opinions and are definitely intolerable by any country or society under the rule of law.

Ambassador Gui said, we hope that people in Sweden will see clearly the nature of “Hong Kong independence” activities, explicitly support the “one country, two systems” in Hong Kong, explicitly oppose “Hong Kong independence” and extreme violence of Hong Kong separatists, rather than echo and support Hong Kong separatists and their extreme violent behaviors. Safeguarding the “one country, two systems” principle and the social stability, development and prosperity of Hong Kong serve the interests of the whole international community including Sweden. It is hoped that SVT will relay the above serious positions of China to the wide Swedish society.