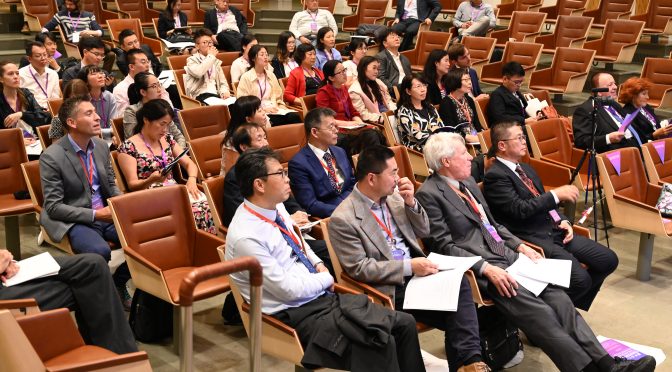 This annual conference coincides with the upcoming 70th anniversary of the founding of the People’s Republic of China. Over the past 70 years, especially the past 40 years of reform and opening up of China, we have been pursuing development based on our national conditions, improving people’s living standards and advancing mutual benefits through open cooperation, realizing a great miracle of development of human kind. China built itself from scratch into the world’s second largest economy, with its GDP exceeding 90 trillion RMB last year, which is 175 times of that of 1952, registering an average growth of 8.1% per year, and its share of global economy rose from 1.8% in 1978 to nearly 16% in 2018. Moreover, China has steadily lifted 800 million people out of poverty, established the world’s largest social security network, and is the first country to realize UN millennium development goals.

To study the Chinese economy, it is important to look at how China has contributed to the world. Over the past years, China has been the most important economic driver of the world, contributing 34% to global GDP growth from 2009 to 2018. China has opened itself to the world in an all-round manner, offering other countries a ride on the express train of China’s fast development. As a world factory with a complete industrial mix and a huge market for the rest of the world, China offers endless development opportunities to other countries. The Belt and Road initiative further opens new room for global economic growth.

Today, despite increasing internal and external risks, the Chinese Government has all the confidence, determination and ability to rise up to the challenge. The positive fundamentals of Chinese economy remain unchanged. China has 1.4 billion people, 900 million in the labor force, 170 million highly educated and skilled population and the world’s largest middle income group of 400 million people and over 100 million market entities. Domestic demand is now the main economic driver, and in 2018 final consumption contributed up to 76.2% to our economic growth. After 70 years of development, China is now home to all industrial categories of the UN industry classification system, and the annual output of over 200 industrial products tops the world. In the first half of this year, China’s GDP grew at 6.3%, still one of the highest among major economies. The significant potential, resilience and room for maneuver of Chinese economy will help it maintain a long-term stable growth momentum.

China adheres to the new development vision of innovative, coordinated, green, open and shared development to improve the quality of and upgrade its economy. Our innovation capacity continues to lift and new industries, new business types and models are thriving. China will remain firmly committed to prioritizing environmental protection and green development, and developing green industries and renewable energy. China will continue to open up wider, firmly defend the multilateral trading system, work with other parties to jointly promote the high quality development of the BRI, and contribute to an open and diverse world economy.

This annual conference focuses on China’s development and the global value chain. Indeed, in a deeply globalized world, interests of all countries are closely interconnected, freedom, openness, connectivity and inclusiveness have become universal values, and peace, development, cooperation and win-win are the consensus of the vast majority of countries. We must follow the trend of times and the objective laws, uphold justice and the interests of people, oppose all adverse currents that go against market principles, free competition and economic globalization.

China and the EU are two major economies in the world. We share a broad range of interests, and we both advocate and defend free trade and multilateralism. A world of peace, stability and openness is in the interests of the entire international community, including China and the EU. It is more important now than ever for China and the EU to join hands and counter the uncertainties brought by trade bullying and unilateralism through greater stability from cooperation. I believe that experts and scholars here will look at the bigger picture and think longer term, and bring more confidence and positive energy to China, the EU and the world.

Let me conclude by wishing every success for the annual conference! Thank you.