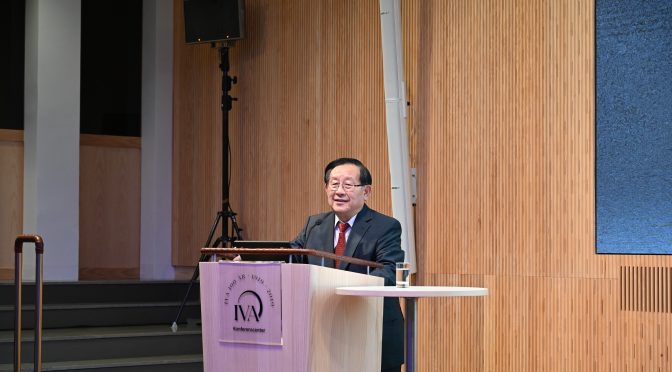 STOCKHOLM, Sept. 9th(Greenpost)– Wan Gang, Vice Chairman of Chinese People’s Political Consultative Conference and President of China Association for Science and Technology(CAST) has given a presentation about Science and Technology Development in China over the past 70 years during his ongoing visit to Sweden.

Wan Gang said during this visit, his main purpose is to push forward bilateral scientific cooperation, scientists and students exchanges and propose the cooperation and joint research in both South Pole and North Pole as well as the third pole, which is the Qinghai Tibet Plateau.

He said he was very concerned about the climate change in the Qinghai Tibet Plateau which could cause severe damage to the nature and the people.

He also made a presentation report about China’s Science and Technology Development over the past 70 years in China.

The report was presented at the IVA conference center and moderated by Magnus Breidne, Vice President of the Royal Swedish Academy of Engineering Sciences.

“I am glad to have Wan Gang here. He is an old friend of us and he visited Sweden last year. He is Vice Chairman of CPPCC. He used to study in Germany and later went back to China to revolutionise China’s science and innovation. Today he will talk about China’s 70 years science and innovation”. said Breidne.

Wan Gang graduated with a bachelor degree from Northeast Forestry University in 1978 after which he joined its faculty. From 1979 to 1981, he was a postgraduate in experimental mechanics at the Structural Theories Research Institute of Tongji University，where he got his master’s degree in 1981 and served as a faculty member. Between 1985 and 1991, he studied and obtained doctorate at the Department of Mechanical Engineering, Technical University Clausthal in Germany. From 1991 to 2001, he worked in Audi Corporation in Germany.

During his presentation, Wan Gang explained why he resigned from Audi and went back to China. It was the former Ministry of Science and Technology Zhu Lilan who visited Germany and met him and asked him about new energy automobile, whether it was suitable to develop in China and why. Wan Gang explained and he found it was such a mission that he could shoulder the responsibility. So in January 2001, he took the post as dean of the New Energy Automobile Engineering Center, Tongji University in Shanghai, China. He worked successively as Assistant to President of Tongji University from August 2001 to Vice President from June 2003 and President from July 2004. In November 2006, he was elected Vice President of the Shanghai Association for Science and Technology. In December 2006, he became Vice Chairman of the Central Committee of China Zhi Gong Party and was elected Chairman in December 2007.

It means he is not a CPC party member. But he was promoted according to his capability. From April 2007 to March 2018, he served as Minister of Science and Technology for 11 years. From 2003, he served as member of the National Committee and its standing Committee of the 10th CPPCC, a political consultative conference working parallel with the National People’s Congress, the top legislative body. CPPCC functions as an advisor for NPC. A lot of large national projects were proposed by CPPCC members and then approved by NPC.

BELT AND ROAD AND INTERNATIONAL COOPERATION

Wan Gang said China is very open minded and likes to cooperate with all the countries in the world. So far it has cooperation with 160 countries and share scientific and technological achievement in many ways.

He said if the arctic organizations join the Belt and Road Initiative or initiate a cooperation mechanism with China, either with BRI or South Pole North Pole and the third Pole joint research projects, Beidou Navigation system can be shared and offer good navigation service for the boats at the sea and connected to the land too.