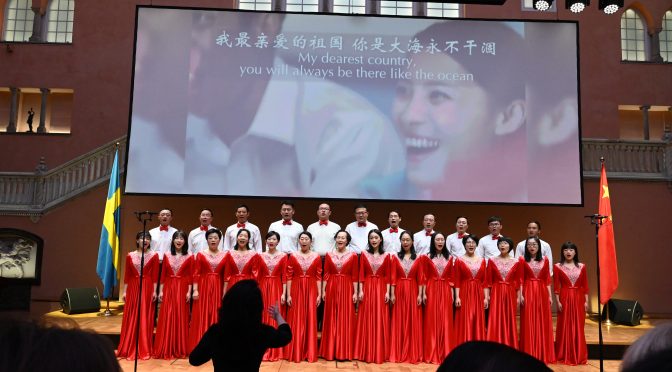 STOCKHOLM, Sept. 20(Greenpost) Chinese Ambassador to Sweden Gui Congyou has said that China has achieved the great leap forward from standing up to being healthy and wealthy.

He made the remark at a grand celebration over the 70th anniversary of China’s National Day held in the Grand Hotel in Stockholm.

“Seventy years ago, the founding of the People’s Republic opened a new era for the Chinese nation. From then on, the Chinese people drove away all foreign invaders and ended more than a hundred years of humiliation. China was lifted from a semi-colonial state into an independent sovereign country. The Chinese people overthrew the rule of feudalism and bureaucrat-capitalism, and became owners of the country for the first time.

China ended the fighting between warlords and brought the divided country back into one that is solidary, united, peaceful and stable. The Chinese people started to shake off poverty and backwardness and embarked on a path of economic development and improvement of people’s life. Chinese people started to eliminate various types of epidemics and put in place a robust health care system.

Over the 70 years especially the 40 years of reform and opening up, tremendous and rapid changes in China transformed the country. In 2018, China’s GDP exceeded 90 trillion RMB, more than 1,300 times as that of 1952 on an absolute value basis, and China became the second largest economy in the world; GDP per capita of China today is nearly 10,000 USD, nearly 550 times of that of 1952; foreign trade stands at USD 4.6 trillion today, over 4000 times of that of 1952, making China the largest country in trade in the world. Over the past 40 years, the share of China’s GDP in the world increased from 1.8% to 16%, and China has been the engine for global growth, contributing over 30% annually. China is the second largest destination for global investment, attracting 98% of top 500 companies to invest.

At the same time, various social undertakings in China also made significant progress. The population under absolute poverty in China was reduced from over 700 million 40 years ago to less than 10 million today, contributing 90% to global poverty reduction. Life expectancy increased from 35 years in 1949 to 77 years in 2018. Illiteracy rate was reduced from 80% to the current 4.9%. China has successfully addressed the issue of run-down areas in major cities, with per capita housing area reaching 45m²and private houses accounting for 70%. China built up the largest education system in the world, with average education years at 13.5 years per person. China has the largest number of R&D personnel and the second largest number of international science papers and citations in the world. The number of patent applications and grants in China ranks the first in the world. The capacity under construction in wind, hydro, solar and nuclear power in China ranks first in the world, and the proportion of coal-fired power in the energy portfolio decreased from 80% to 60%. China is also the first country to successfully address desertification and realize the receding of desert and advancement of inhabitants.

Over the past 70 years, the Chinese people realized a tremendous transformation from standing up to becoming better-off, achieving what took developed countries several centuries to achieve. Today, socialism with Chinese characteristics has entered a new era, and is advancing towards the dream of building China into a great modern socialist country.

China is still yet to realize complete reunification. A stronger China does not mean we will attack, bully or take from others, rather it means we can better protect ourselves from being attacked or bullied by others, better defend against others invading and robbing what is ours, and protect our sovereignty, security, territorial integrity and development interests. China will continue to commit itself to domestic development. No matter how much progress we make, we will follow defense-oriented foreign and defense policies, seek to co-exist in peace with all other countries and pursue win-win cooperation. China will never take an expansionist path, and will never seek its development at the expense of others. China will continue to be committed to expanding opening up, and its door will only open up wider, since we are keenly aware that isolation leads to backwardness, and backwardness leaves one vulnerable. We welcome exchanges with all other countries with open arms. The 1.4 billion Chinese people, which account for 1/5 of world population, getting stronger, is an important force for human development and world peace and security, and major contribution to addressing various global threats and challenges.

Gui noted that on 9 May 1950, Sweden became the first Western country to go beyond differences in political systems and ideologies and establish diplomatic relations with China, and helped with China’s development and reform and opening up. It benefited China, Sweden and the whole world. Today we have with us many Swedish friends that have been devoted to China-Sweden friendship and China’s development. The Chinese people are grateful for that and will never forget you! China’s development has entered a new era. Next year we are going to celebrate the 70thAnniversary of China-Sweden diplomatic relations, which presents our bilateral relations with new opportunities. On the basis of mutual respect, equality and non-interference, the Chinese side is willing to strengthen engagement, dialogue, communication and consultations with Sweden, and exchange state governance practices. Building on the rapid growth in the past two years, trade between China and Sweden grew by another 3.7% from January to August this year, exceeding USD 10 billion, and the Swedish side continues to maintain a surplus.

He stressed that China is willing to further expand trade and investment cooperation with Sweden, and explore cooperation in new areas such as tackling climate change, innovation, sustainable development and smart cities. It is hoped that China and Sweden will remain true to the original aspirations when we established diplomatic ties, join hands together for the development of our two countries and for a better world, and make due contributions to building a community with a shared future for human kind.

“We recognized China’s contribution to the United Nations and we like to continue to work together with China. “

She said she is happy to see the increase of import and export from and to China over the past two years. She said China has become the largest trading partner with Sweden in Asia. And she is glad to see this trend continues.

She admits that Sweden and China has different opinions in certain issues, but she also promised to continue the dialogue and find a channel to talk.

In addition, Swedish Army, Navy and Airforces Generals also attended the reception. They will send a large troupe to attend the October dubbed Military Olympics to be held in Wuhan, Hubei Province in China.

A total of 600 Chinese and Swedish guests from all walks of life in Sweden including overseas Chinese attended the grand celebration on Friday.