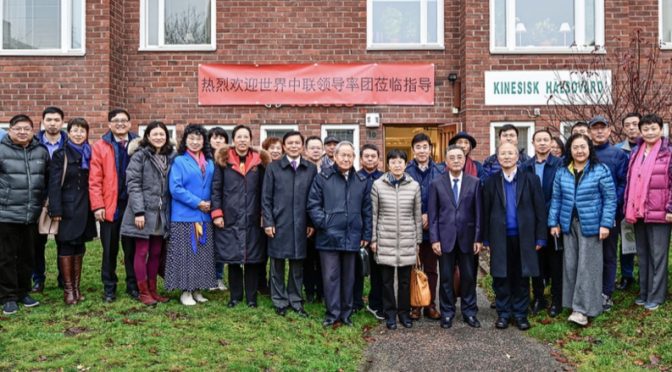 This was right after they attended the 16th World Congress of Chinese Medicine which was successfully held in Budapest, Capital of Hungary. The delegation includes leading experts and specialists in the field of Chinese medicine.

They were warmly welcomed and Ambassador Gui made extensive talks on the development of traditional Chinese medicine acupuncture and moxibustion in Sweden, and further explored how to further promote Chinese medicine culture and relieve the suffering of the Swedish people and overseas Chinese.

Counselor Dai Gang of Science and Technology at the Embassy and President Yang Chungui of the Swedish Society of Chinese Medicine gave a detailed introduction about the operation of Swedish traditional Chinese medicine and acupuncture clinics and the exchanges and cooperation with Western doctors such as those from Karolinska Hospital.

Jiemei, a lawyer at Guohao Law Firm, introduced the work of promoting acupuncture legislation in Sweden. After the talks, the Embassy arranged a lunch for all the guests.

After thorough inspection by the leaders of the World Federation of China and the friendly consultation between the two sides, they jointly decided that the World Federation of Chinese Medicine Professional Level Recognition Department and the Swedish Society of Chinese Medicine will sign a cooperation framework agreement on the “Cooperation on the clinical superiority technology transfer of traditional Chinese medicine and the evaluation of professional titles of international Chinese medicine”.

At 3 o’clock in the afternoon, under the witnesses of the WFCMS’ leaders and Guo Hao law Firm’s lawyer Jiemei, Professor Zheng Yuexian, the chief expert of the WFCMS and President of the Swedish Association of Chinese Medicine, Yang Chungui signed this important agreement.

In the afternoon, the delegation concluded the intense academic study tour and flew back to China with Air China.

The World Federation of Chinese Medicine Societies is an international academic organization approved by the Chinese State Council and a member of the World Health Organization. It’s a Non-Governmental Organization (NGO).