Today marks the 66th anniversary of Sino-Swedish relations. In China, when a person becomes 66 years old, we will give a grand celebration with food and wine.

Similar, the relations between China and Sweden is worthwhile to celebrate too.

Recalling the past 66 years,  a lot has happened between the two countries.

Sweden was the first western country that established diplomatic relatlions with China.  That was May 9, 1950.

According to historical documents, Norway, Danmark, Finland and Sweden all recognized China in January.  But due to Mao Zedong and Zhou Enlai’s diplomacy of cleaning up the house first, they decided to accept Swedish offer first and established diplomatic relations with Sweden on May, 9, 1950.

The consideration likely involves the history between China and Sweden. As early as 1700 century, Sweden had sent Gothenburg Ship to China to buy the tea, porshelin and silk. The trade caused a wave of China heat.  Even Queen Lovisa was a fan of China.

China Pavillion in Drottningholm was the typical evidence of this craze. It was Lovisa’s gift from the king when she was 33 years old.  Inside the pavillion there are a lot of Chinese books. The most impressive thing was the echoing room on the second floor.

Sometimes I feel the down to earth manner and the honesty Swedish people own are the trace of Chinese virtues. Honesty and down to earth are also the virtues Chinese seek.

In the 19th century, Sweden was the first country that signed a business agreement, but didn’t openly invade China or rob China like the other eight western  power.   But the two sides did sign agreements to divid the antiques people unearthened in Beijing Suburbs. That is why people today can see a whole lot of precious antiques dating back to Xia, Shang and Zhou Dynasty in Fareastern Antiquities Museum.

Swedish explorer Sven Hedin explored a lot along the silk road. Many Swedish like to have adventures in China. Ericsson established its office in Shanghai at the end of 19th century.

Meanwhile, Chinese also visited Sweden.  Liang Qichao, one of the six Gentlemen who presented a proposal to the Qing Emperor but faced severe punishment escaped to Sweden and lived here for a year. 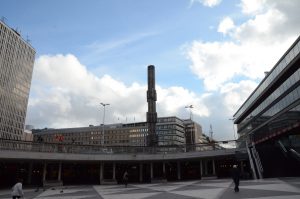 Sino-Swedish relations have been so good that they sometimes can criticise each other. But they remain good friends.

Swedish King Carl XVI Gustaf visited China many times. Crown Princess Victoria had her training in China for a month.

While about 500 Swedish companies operate in China, many Chinese companies come to Sweden to invest. Volvo car owner now is Chinese Geely. Saab was also bought by Chinese from Shandong province.

Many Chinese investors bought houses in Sweden and like to contribute to Swedish economies.

In terms of culture, a new Chinese Culture Center will be established right in the center of the Stockholm City.  It is a good present for the 66th anniversary of Sino-Swedish relations.

What will be the future like?  In fact, from what I observed, more and more tourists, especially ordinary tourists are visiting Sweden. This is a sign that the Chinese are getting richer and richer. They can spend money from their own pocket to go abroad. They can afford it and they are allowed to do this.  There is no lofty slogan going on, but there is still a lot happening on the ground.

In my opinion, it is these down to business kind of relations that can be more sustainable if the embassy can allow this to happen. More freedom to move and more permission to visit,  it will be good for both sides, for the common people to exchange and do business.

Sweden has advantage in environmental technology and practices, design, water and air and green energy while China is in need of green food, green tech and green energy. 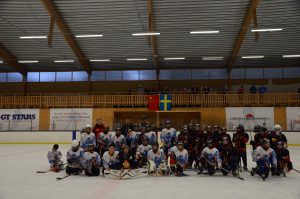 Recently the exchange of Ice Hockey becomes frequent too. Several activities have taken place.  It is hoped more and more exchange activities will take place with the support from both government and businesses.