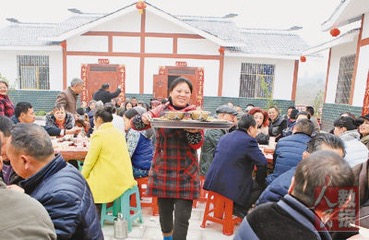 By Zhang Mengxu from People’s Daily 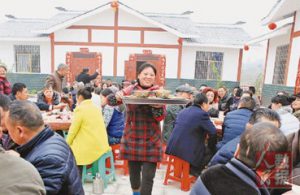 Villagers from Guang’an, Sichuan province hold a housewarming banquet after they were relocated to new houses before the Spring Festival this year. (Photo by People’s Daily)

However, over the past years, China has made great achievements in human rights undertakings. For instance, food and clothing are no longer a problem for the 1.3 billion Chinese people. Over the past three decades, over 700 million people have been lifted out of poverty, accounting for more than 70 percent of the global poverty reduction. China is the first country to have realized the Millennium Development Goal of halving its poor population.

At present, 770 million Chinese are employed and nine-year compulsory education has achieved universal coverage. Rights of 230 million senior residents and 85 million handicapped people are well protected, and the basic life of over 60 million low-income residents in urban and rural areas is supported by the government.

Prior to the founding of PRC in 1949, China’s per capita life expectancy was only 35, and for now the number has been raised to 76. China is hailed by the UN as having the best record of improving life expectancy during the past three decades.

Tom Zwart, director of the Netherlands School of Human Rights Research, ranked China’s record of poverty relief among the greatest human rights achievements of all time.  He didn’t hesitate to show his anger towards false speeches belittling China’s progress.

“I sincerely congratulate on the remarkable success of the CPC and Chinese government in eradicating poverty,” added Zwart, also a human rights professor with Utrecht University.

In 2016, China was elected to the UN Human Rights Council by 180 votes, becoming one of a few countries which have sat in the Council for four times.

Zamir Akram, chair-rapporteur of the Working Group on the Right to Development at the United Nations Human Rights Council, commented that China is the only social and economic entity that has ever achieved such a rapid development.

“Over 700 million Chinese people have been lifted out of poverty in such a short period,” he hailed, adding that the country also has offered big amount of aid to other developing countries.