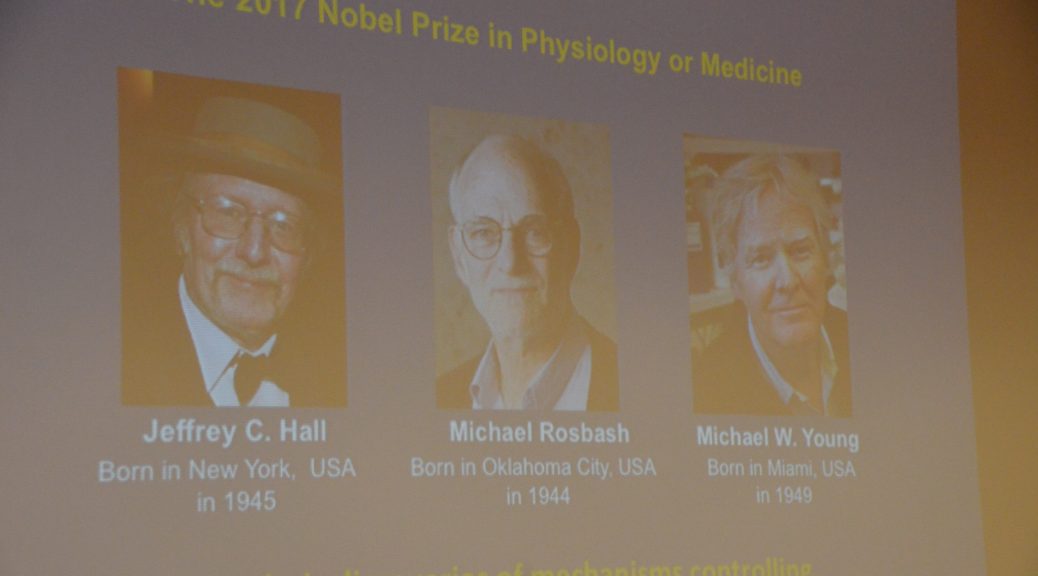 As usual, Nobel Laureates were interviewed by the Nobel Media right after the announcement.

“You’ve reached me where I’ve lived for many years in the middle of nowhere, Maine, rural Maine. Also known as Central Maine. In the extreme north east of this great country of ours. It is physically beautiful, including, I’m looking out the window, it’s a very beautiful day today, which is often is. Not quite yet but it’s still green as can be but it’s, because Maine is not like Arizona.

What is Hall’s reaction to the prize?

JH: Yes, correct. That was about half of our work, during my time when I was employed, had to do with circadian rhythms, indeed. That became amongst our most well-known research achievements, if any. Usually, and, relentlessly co-authored with Rosbash with whom you’ve already spoken. So he and I joined forces in the early mid-eighties and imagined that we might, or we might not as the case may be, go onward and upward doing research together in that arena. Which often involved crucially, what I call AIs – actual investigators – like students, post-doctoral supervisees, from the two labs working very closely together, even day by day. So that was enjoyable, it wasn’t that either lab was way out on its own limb. We had a lot of mutual support, I think it’s fair to say.

Hall and Rosbath were actually teaching in the same university.

JH: This was based in large part on becoming close personally at the beginning where our research interests in very general terms were in genetics, writ large. It was only after six, seven, or eight years that we started to work things together and imagine that possibly our backgrounds and our skills, if any, might be complementary. The key reason that we got into that kind of relationship was because we were personally close. We had mutual interest in low culture stuff like sports and rock and roll music and abusable substances and stuff. And so we spent a lot of time just carousing or sitting together in misery at local sports stadiums. We have also certain, many similar interests, even in the pre-rhythm research days. He as a molecular geneticist, I as a straight up fruit fly geneticist.

AS: And that brings us onto flies. We should say a word for flies on this day of all days because once again the power of the fly as a model organism has been demonstrated.

JH: That’s right, this is something I’ve always … I was taught when I was a graduate student about a phrase, it’s known as the law of drosophila. To know about the deep history going all the way back to the 1920s, and the 40s and the 90s and now the second decade of the current century. It’s just one of a zillion examples of how basic research on a supposedly irrelevant organism can have broader significance than, with regard to what’s going on in terms of that organism itself. And this has been true of fruit fly research, which has been a major contributor for decades. For well over a century actually.  The key fourth awardee here is, as some of us call them, the little fly. So the little flies deserve another tip of the hat, I think, in terms of what has happened today.

When Michael Young was interviewed, he was busy answering phone calls.

M Young: I don’t know. Somehow, somehow, it’s just all spinning around in my head that this has happened. You know about these things and you can see possibilities on the horizon but you never really…Has this really happened?! [Laughs.] I’m still at that stage.

I mean this was … You know, I had gone to Stanford to learn how to use this technology, it was brand new in the 70s. And starting up my lab at Rockefeller I had worked a little bit on this problem, circadian rhythms, thanks to these tremendous mutants that Seymour Benzer and his student Ron Konopka had found. And I just thought it was a terrific problem and maybe the toughest thing I could try to tackle because it was behaviour; you know, what could we learn about a fairly complicated behaviour that we all exhibit, which was most easily represented by sleep wake cycles. And frankly I thought we might find out maybe a little bit. I never thought we would really understand what the motor behind this was, at the time. We were very lucky, we managed to find genes that fit together like puzzle pieces to explain how this thing worked. And the techniques and the approaches kept changing and I kept … I was very lucky I kept getting students and post docs that were extremely good and just did everything right. And the other piece of this was, you know, there was sort of a race going on in the early years. My colleagues Jeff Hall and Michael Rosbash and we kind of pushed each other along because … I mean most of it was independently done but we did have to collaborate from time to time, but we worked on slightly different problems but the solutions to those problems all, as I was saying, fit together like puzzle pieces, that kind of bring the picture into view. It was, it’s been really quite satisfying. This really pushes it way, way, over the top. It’s really quite incredible. And I couldn’t … yeah, this is terribly exciting as you can imagine.