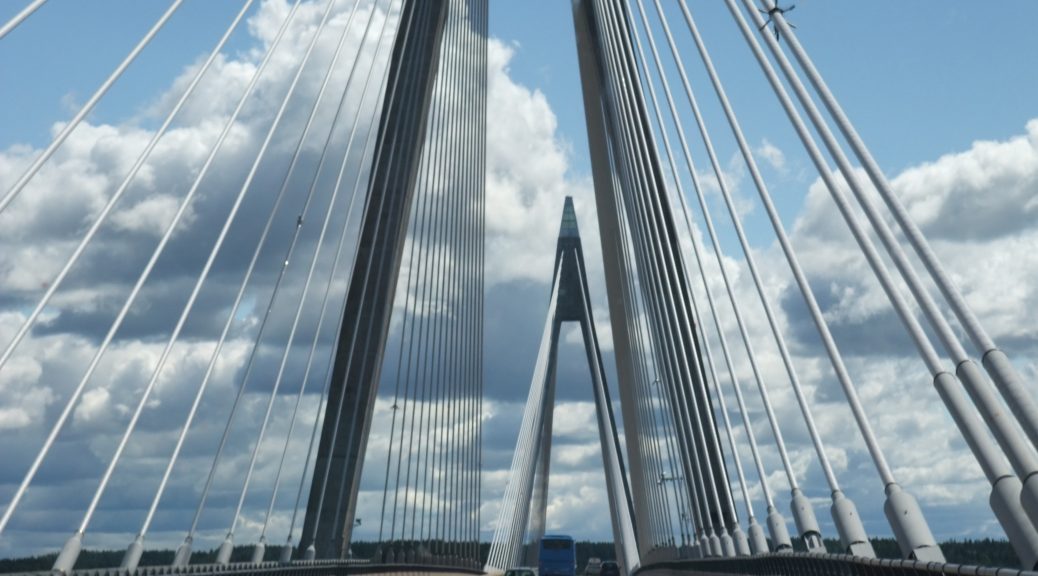 This can be seen as an initial reaction against the Belt and Road Initiative when many people keep on asking what is China’s purpose? Why do they do this? What benefit they can gain? What benefit can we gain?

It is understandable that the western idea is always basing on the utilitarian foundation. If you do something, it must be for your own benefit, otherwise you will not do it.

But my understanding of the Belt and Road Initiative is that it started from the ancient silk road routes through central Asia. President Xi Jinping proposed this idea in Alma Ata.  It is a strategic thought to meet the development demand.

China had been a poor country for almost a hundred years and the main reason is that China didn’t have the good infrastructure.  The road was poor and transportation was bad.  So China’s experience is that to become rich, you must have good roads.  (Yao Xiang Fu, Xian Xiu Lu). These kinds of projects are usually big ones, thus it needs state-owned companies to do it because they have high standards engineering capacity.

In China private sector developed rapidly, but a lot of problems also started from private companies.  It takes time to regulate.

After 40 years of development, China becomes stronger, at least with another two years it aims to wipe out the poverty completely. This goal should be praised because with the completion of this goal, it is expected that China’s human rights situation will be substantially improved.

I understand the western solidarity type of wind against China starting from China’s changing of the constitution and ensuring Xi’s presidency forever. Many people understood this change as a guarantee for Xi’s presidency for life long.  But my understanding is that Xi wishes to have a collection of power so that he can carry out his plans more effectively.  But it doesn’t mean he will be president forever.  No one guarantees that after three terms or after he fulfilled the goal of building China into a modern country with even a very basic demand of having blue skies in Beijing, he will step down. Or he will lead an orderly expended scale democratic election.  Through this year’s NPC congress, I think Xi is implementing an orderly and transparent voting procedure.  And his presidency was elected with formal voting procedure.

I am sure China’s intention is not to impose China’s influence to anybody. China is a peace loving country. Chinese people work very hard just to live a better life.  When they have good skills and building capacity, they like to share this with other countries.

It happens exactly like SIPRI’s expert analysed that it is those countries that needs China’s capacity contracted with China such as Greece and Spain. In the early stage such as 2005, or before, China also imported technologies or engineering in waste burning from Spain.

That some EU countries worry about China is understandable, but unnecessary.  On the one hand, they worry if one Chinese will reach a European’s living standard, then China has 1.3 billion people, how many earth we should have to feed such a demand? On the other hand, they worry if you build a port for them, what will be the future? We have no secret from you any more.  How can we maintain our independence?

But China’s Belt and Road initiative is not to take from you, it is to build for you to use.  The principle is to negotiate first and then you build together and then you share the benefit in the end.  Because you put money in the bank and now you get the bank loan and you got infrastructure.  Improved infrastructure will improve business. With booming business, you will get money or benefit.

China can only provide help to those who really need help. It is very difficult for Nordic countries to think’ how can we need help from China’? It is always we who provide help to others.  Indeed, China still has a lot to learn from the Nordic and western European countries.  But for infrastructure construction such as fast train track and train, China is indeed very advanced. If Nordic region can coordinate and build fast train, travel time on average will be shortened by half, it will substantially improve the business environment and well-being of the people.  It will promote tourism substantially.  Business meetings can increase substantially.  It will only make business even more efficient.

Some people especially some so-called experts and new media persons  recently launched a lot of negative coverage about China in order to win the readers eye balls.  In the long run, it will prove that China is indeed the main force in maintaining the world peace and driving the world development.  China never throws out problems even though they have problems inside China.

This is a big difference between China and America or Britain. When America has election or other problems, they will put their finger on China or other countries and then when they succeed they become normal again.

This kind of drama doesn’t happen in China. China is so large that it can saturate its own problems.  It will not hit others in order to win its own election because they can balance the situation in China according to the real situation.  This is because the Communist party’s goal is to serve the people and make the country a good land to live and people enjoy a better life.

This has happened already in Beijing, Shanghai and most of the eastern regions.  Last month when I came back from Beijing, in Helsinki transfer, I met a Swedish lady who visited Shanghai and visited all the banks in Shanghai, she said she felt people in Shanghai really enjoy  a good life.  They eat well, wear well and they also walk beautifully, namely not always in a hurry.

Those who broke the Chinese law went to America or other countries and then fiercely curse China.  It is not commended.

Back to Belt and Road Initiative,  it is indeed an initiative, it is a good -will suggestion or proposal for all to sit around the table to discuss.  It is not an imperative for everyone to obey.  China thinks when people get better life, they will not fight each other any more.  This is China’s experience.  It is a good will and many experts for example Schillers Institute’s Helga La Rues highly commended belt and road initiative because she said this is so far the best available way to avoid war or conflict.

Belt and Road is also a long term initiative. It will be implemented only in the countries or places where needed.  Those who don’t need it, it is absolutely ok if you are against it or disagree because it doesn’t suit your situation. So let’s forget it.

Belt and Road Initiative is a good idea for Asian, Central Asian, Africa, Latin America and maybe Northeast Asia.  It is indeed difficult for Nordic Countries which are so rich, so well developed and almost world model countries to fit in.

However, I think it is still ok because one of the initiative is to promote people to people communication and exchange, in that sense, it also fits.

I suggest that Nordic countries and western European countries and China  talk with each other in fixing the world peace and development, but not condemn each other.  I read the SCMP article saying the European Ambassadors condemn the Belt and Road Initiative, it is a completely misunderstanding of the purpose of the initiative.

Of course there is still big room for China to improve. That is to invest more in education and research, invest more in culture and domestic development.  There are still problems in rural China where not just poverty alleviation is needed,  all the cultural and education and other wellbeing facilities are needed.

If outside world don’t need China, let us build every inch of China a beautiful China.  Blue sky and clean water and soil is just fundamental and basic requirements.

This is only the writer’s own opinion.

Xuefei Chen Axelsson is a senior editor and correspondent freelancing for different media.  She studied World Politics, Economics and  International Relations.  She also studied leadership for Sustainable Development in London and got a Master degree in it. She has long been journalist covering various development conferences and practices by the United Nations.