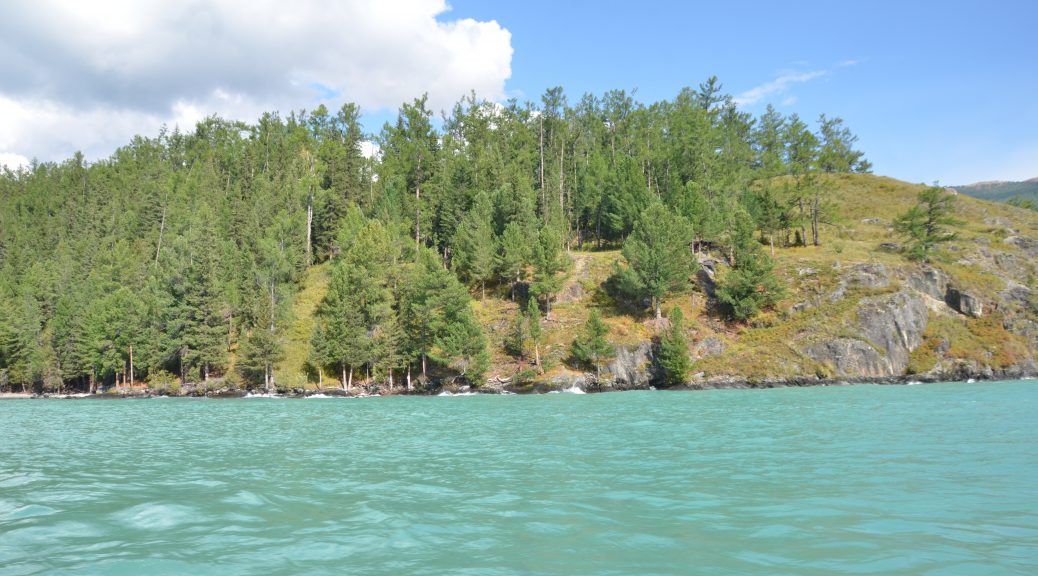 Kanas Scenic Spot is the most beautiful and spectacular scenic spot in Altay, in Xinjiang Uygor Autonomous Region and even in the world. Under the jurisdiction of Altay Prefecture, Northeasten part of Xinjiang,  Kanas Scenic Spot is part of the nicknamed one thousand kilometer gallery. 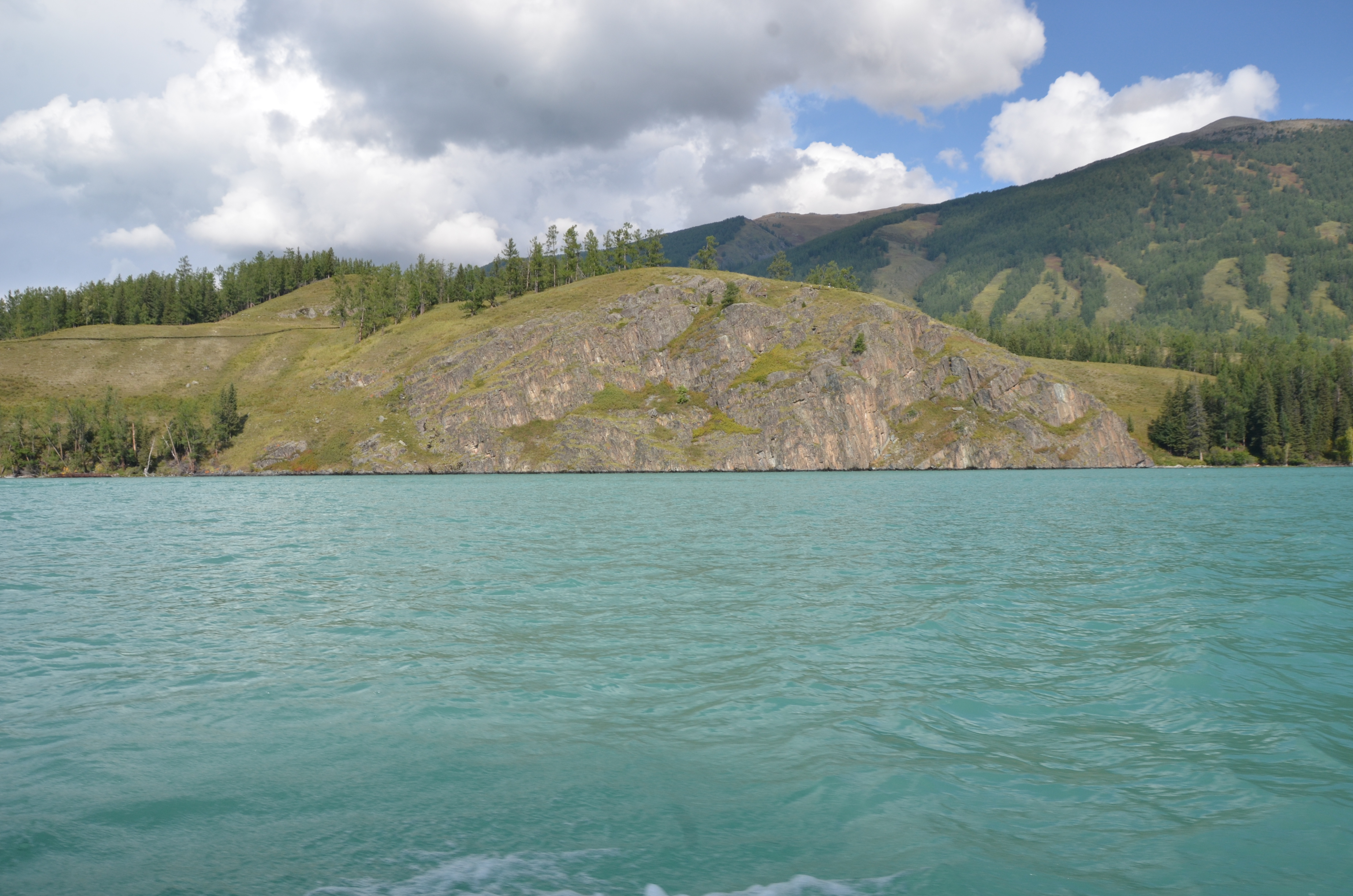 It is an area of over 10 thousand square kilometers, receiving about 4.6 million tourists last year and is expected to receive 6 million by the end of this year.  So far they have received 3 million. They plan to open the area to tourists from all over China and even the world. In the past the area was closed due to the heavy snow.  Now tourism have been prioritized as a pillar industry.

Why is it so attractive and what is special with Kanas? Because it enjoys many only’s.

It is the only extension zone of Siberian taiga forests, the only distributed areas of Siberian animals and plants, the only Arctic water system nationwide in China, the only Mongolian Tuva habitation throughout the nation, the only scenic spot with European or Canadian style scenery(others dubbed it as Switzerland, but it is Kanas in Altay, Xinjiang ) in China and the only natural reserve that borders with another two countries across China. 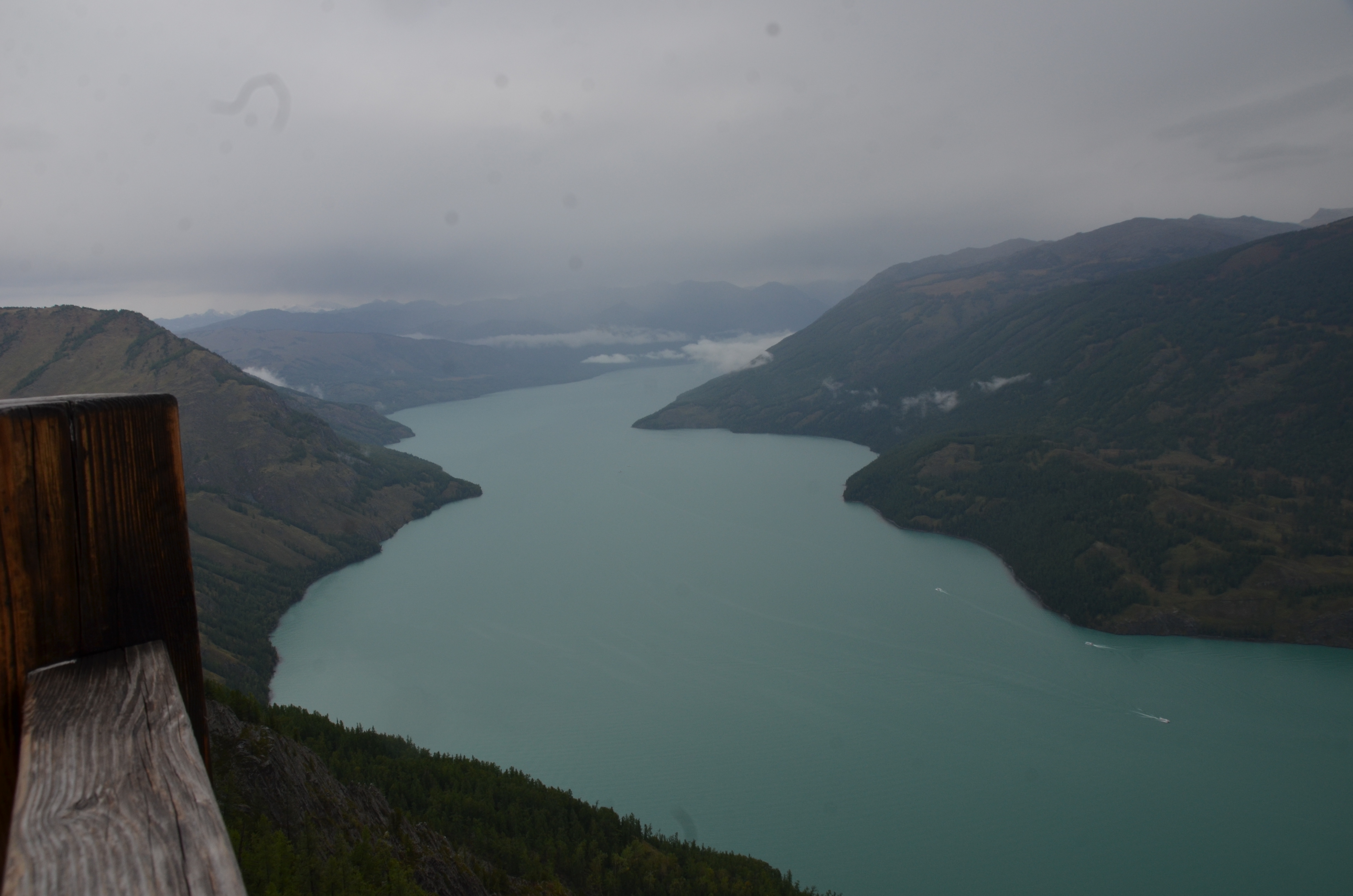 To promote tourism industry and facilitate infrastructure, starting from this year, Xinjiang adds 10 flight courses including Urumqi-Kanas, Turpan-Kanas tourism charter and the new train and bus routes inside and outside Xinjiang are constantly increasing as well. 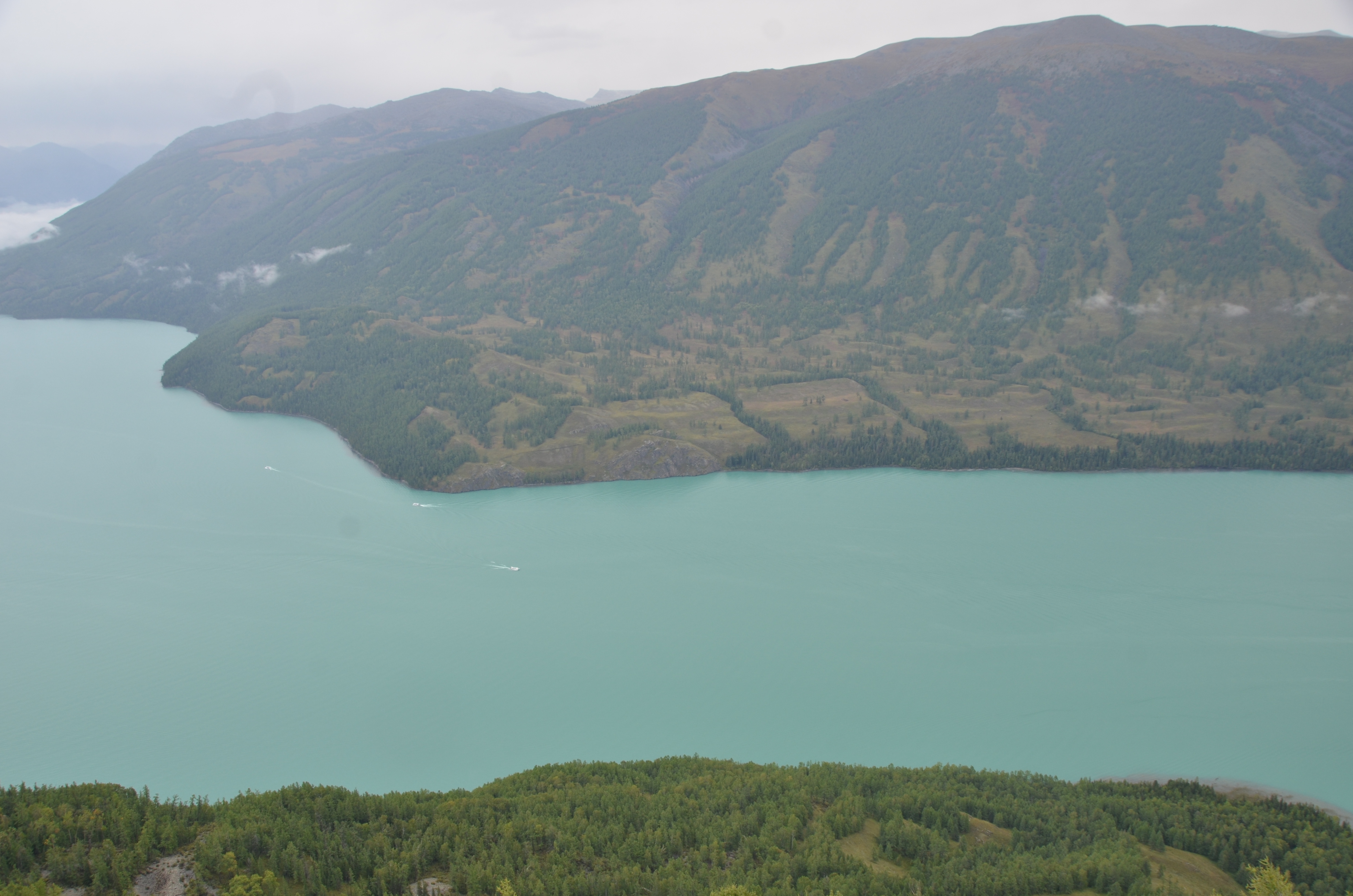 A group of 15 foreign journalists from 14 countries including Japan, Sweden, Belgium, Afghanistan, Kyrgyzstan, Bangladesh, Indonesia, India, Egypt, Pakistan, Malaysia, Turkey and Uzbekistan and together with 22 Chinese journalists visited  Kanas Lake and Kanas Pavillion.  The beautiful scenery stunned everybody when they visited it. 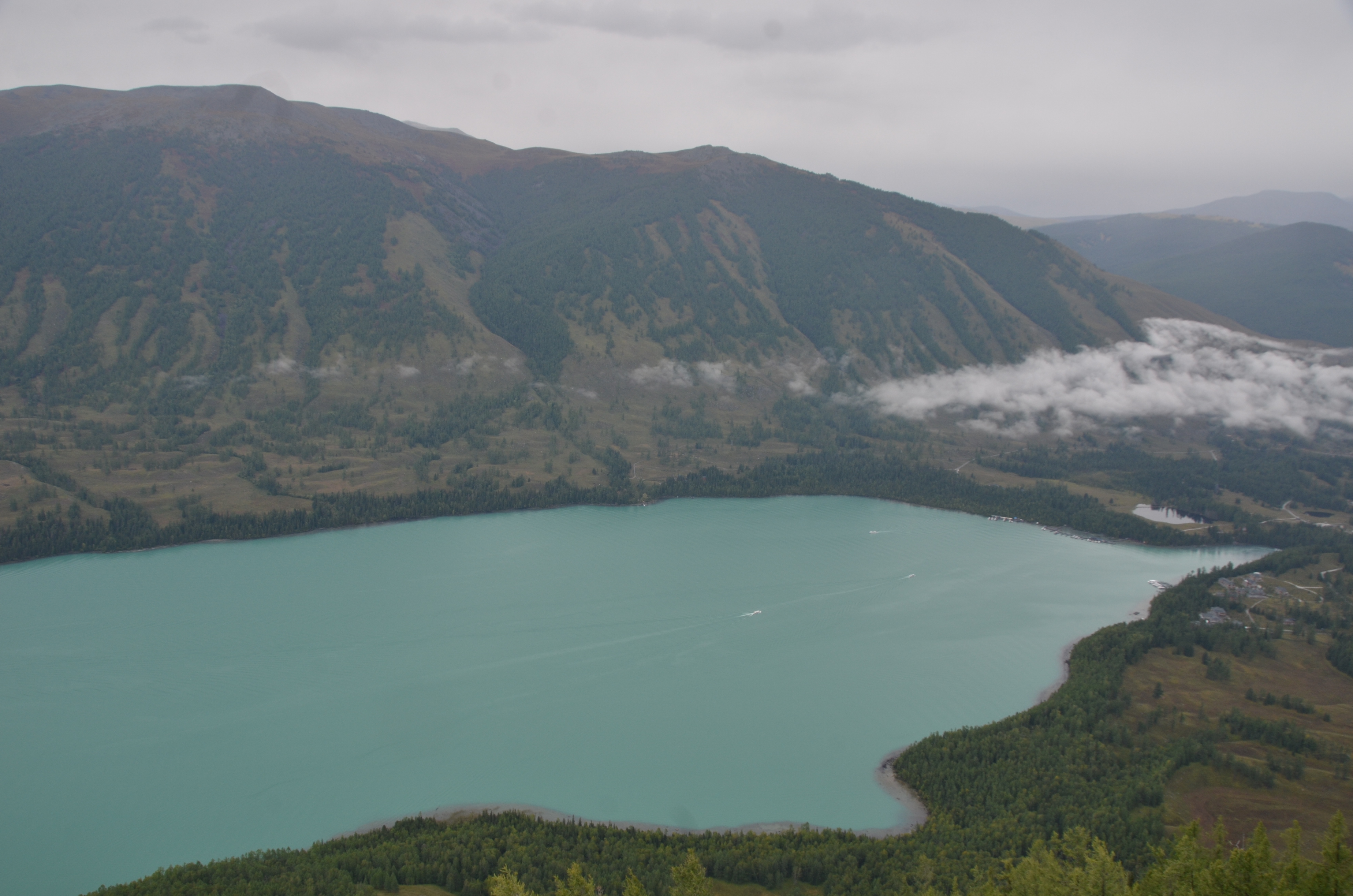 We were told to take the PLA overcoat and umbrella with us because it will be very cold on the top of the hill.  Most people did that except me.  I thought as long as it is green, it should be tolerable.

As we climbed up to the top, it began to rain. Feeling like climbing the Mountain Tai in Shandong Province,  East China, we also saw very beautiful white cloud covering the green trees and merging with the blue and green lake water. 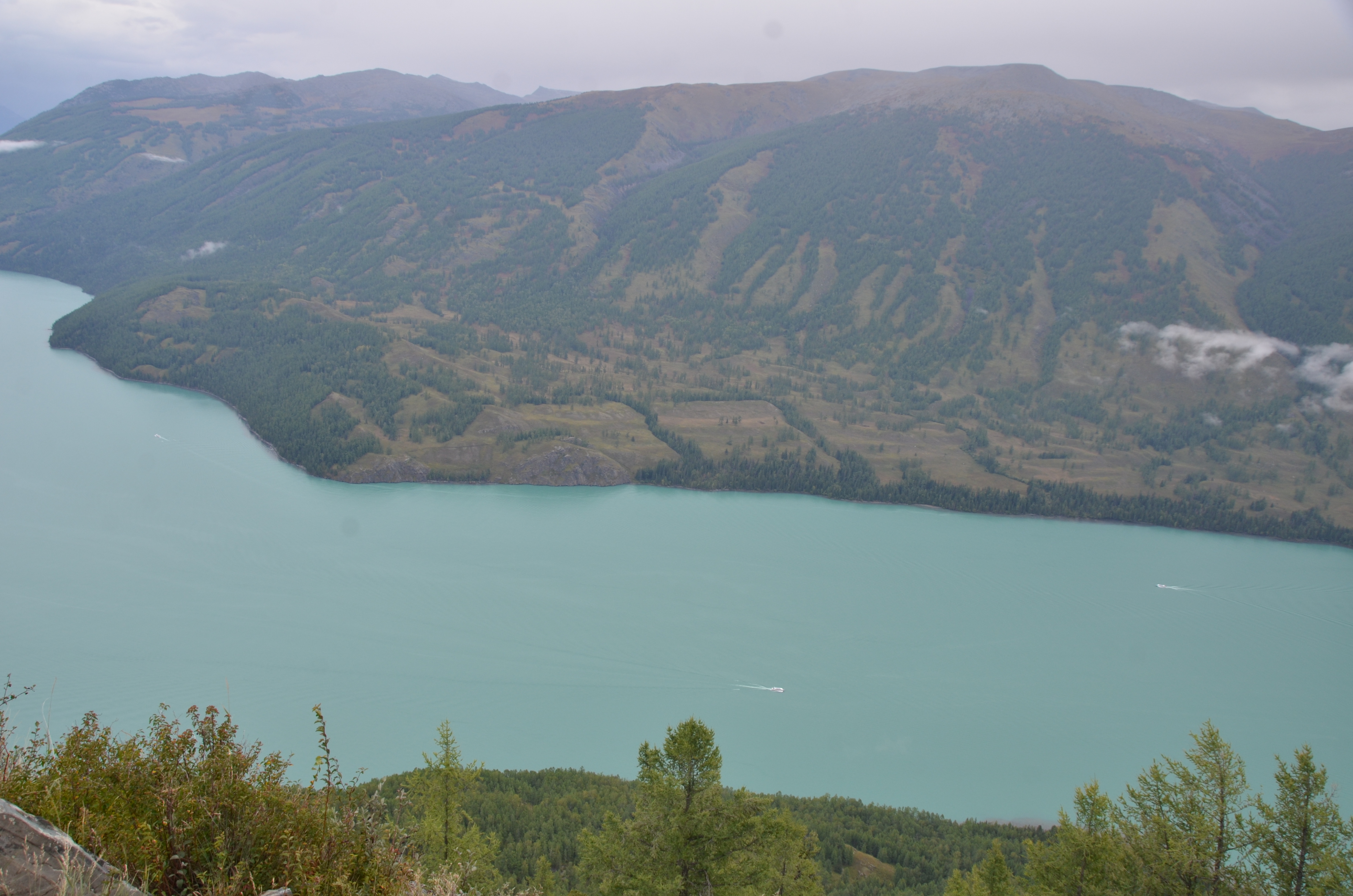 All the trees here are very green and fresh. All the bush under the trees are also beautiful because they showed different colors.  Biodiversity is very obvious here. 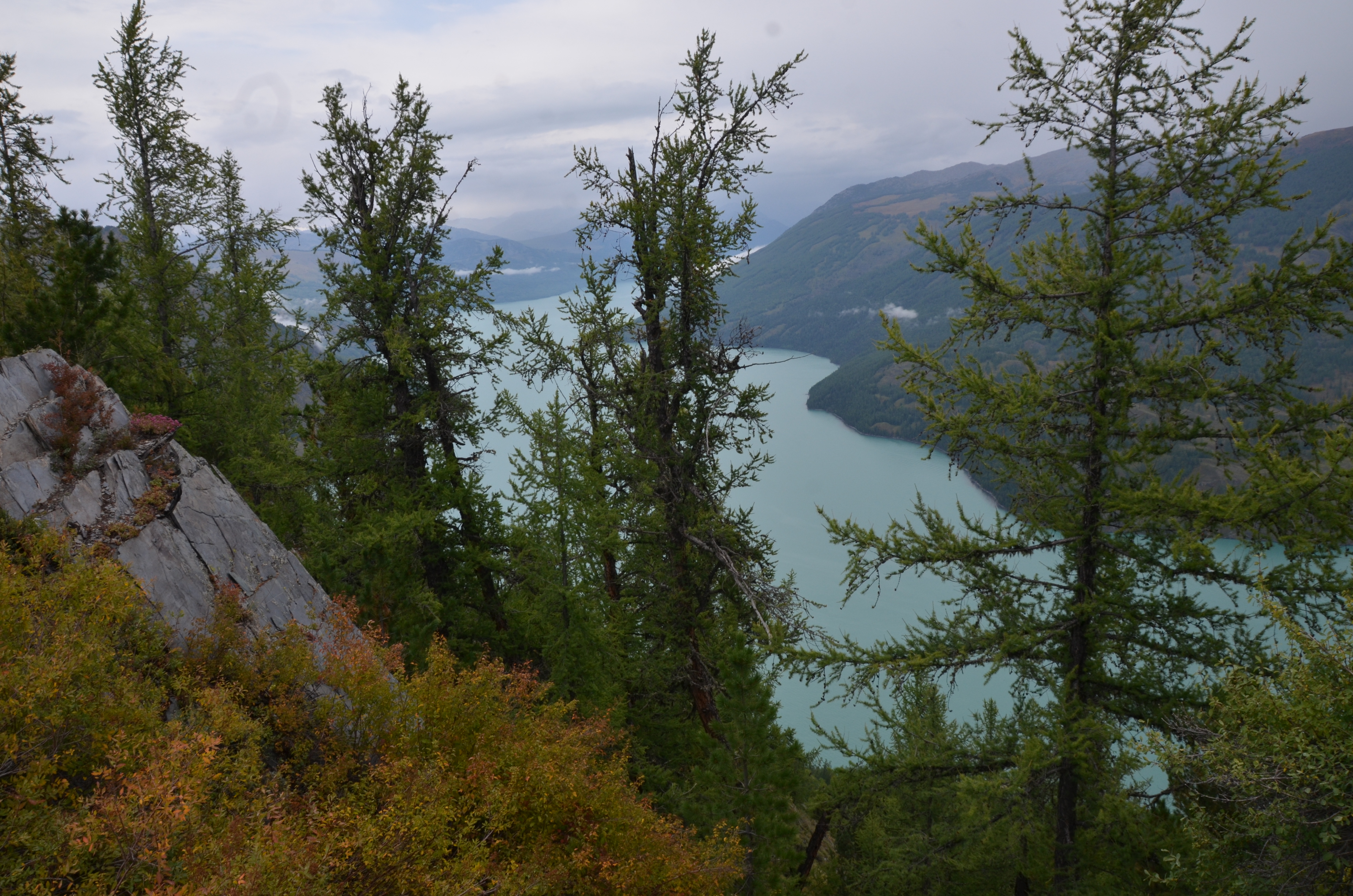 When we climbed to over 500 stairs, I thought we had passed two thirds of the stairs. Every movement up, we found a new angle to see the lake. It is green water.  It looks like the lake in Calgary in Canada, I think, but it also looks like the gulf in Norway or the river in southern New Zealand and yet it is right here in Altay, China. It is just beautiful, clean and beautiful with the jade blue or creamy green. It feels like a treasure. 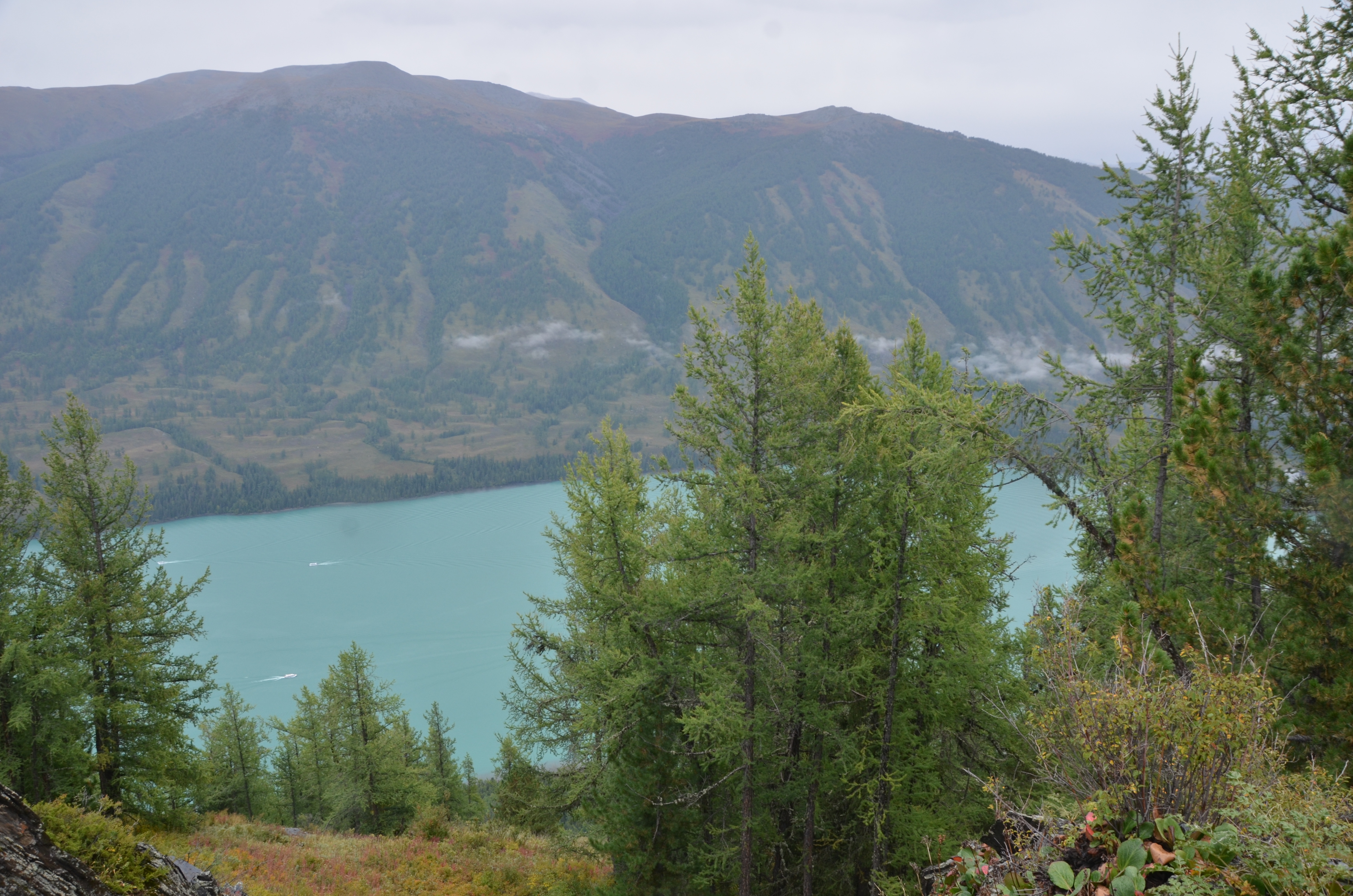 As we stepped up the steps, it rained even heavier. The white cloud didn’t disperse quickly. On the contrary, it emerged and extended to the lake. When the lake water almost covered by the white cloud, it looked so beautiful. 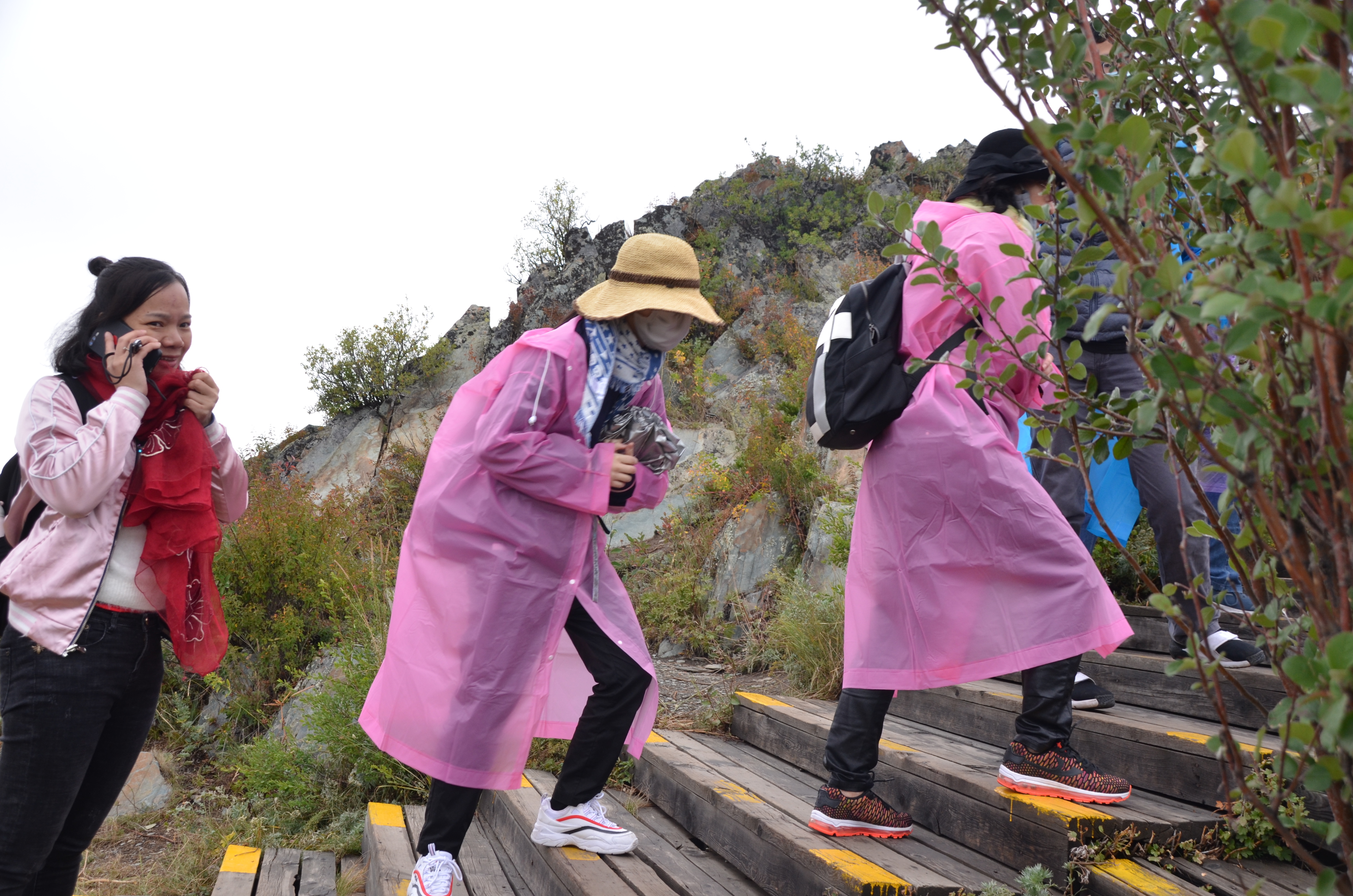 Tourists from Zhejiang province and Henan province or even Northeast China were walking in the rain. They all commended the place to be very beautiful and spectacular. 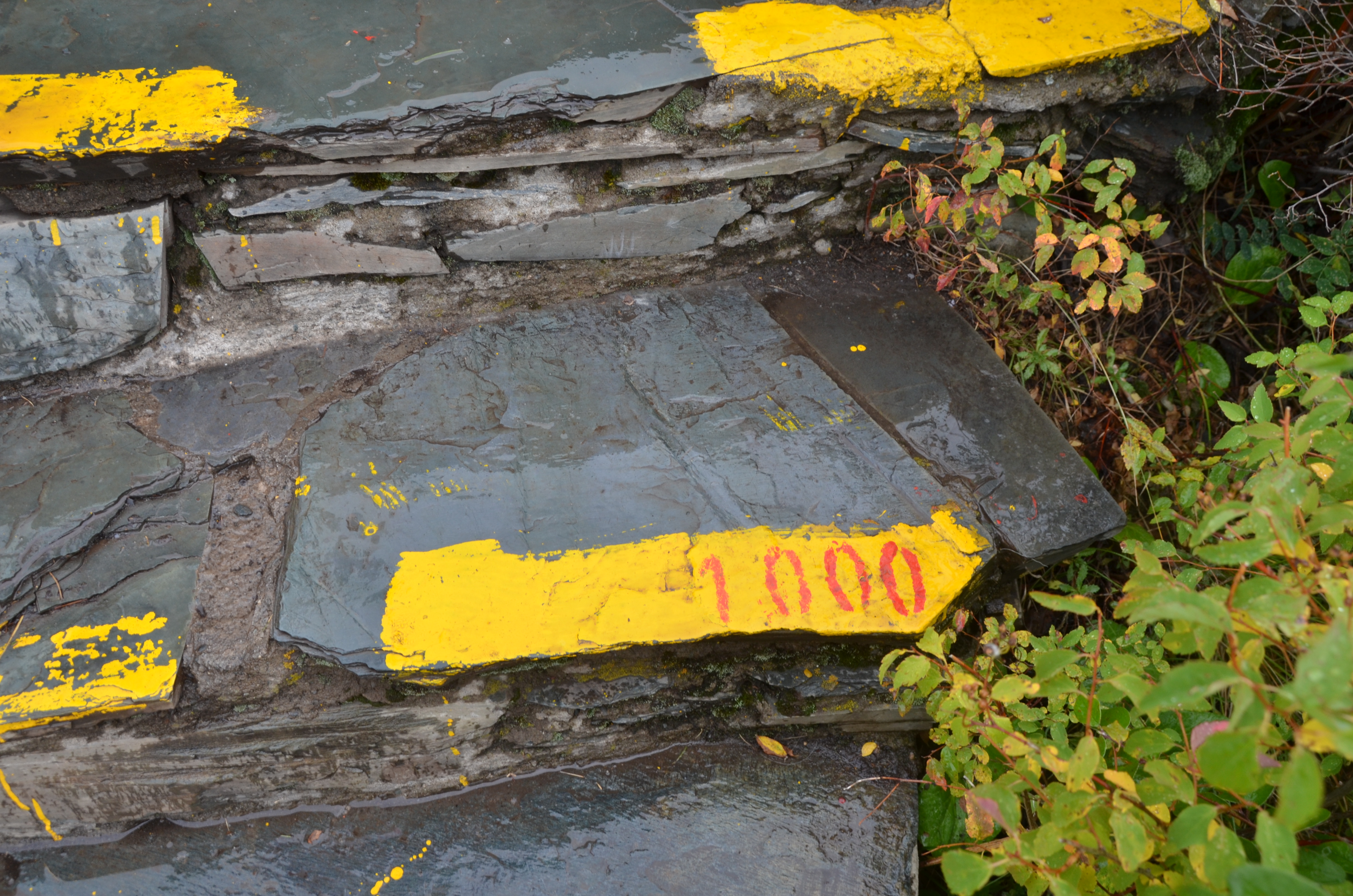 When we arrived finally to the top by walking 1100 stairs, we came into the pavillion to have a good panorama view of the Kanas River or lake. 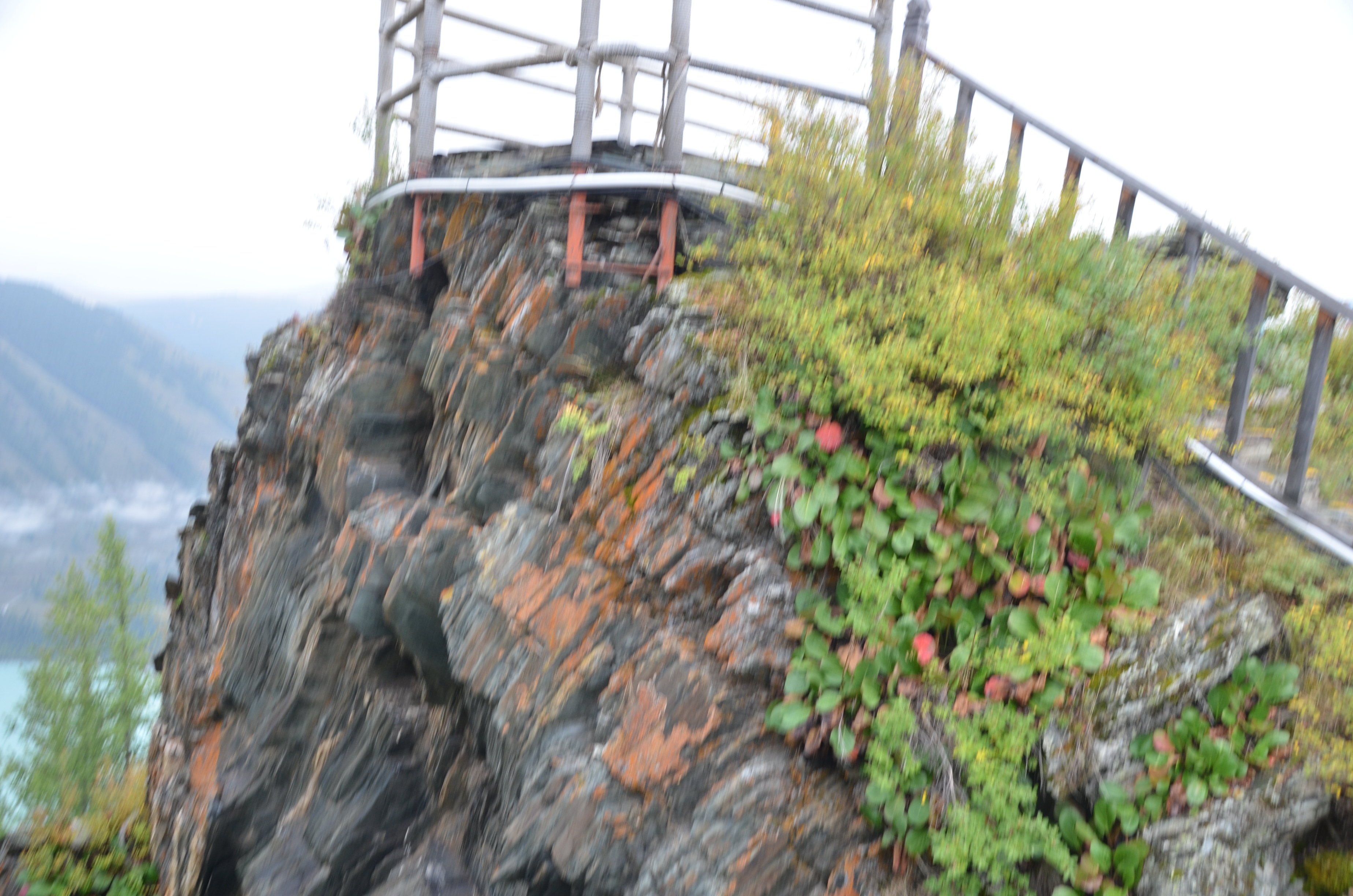 The saying goes that one goes up to look at  the lake and goes down to look at various flowers.  One can described it as a sea of flowers with a great diversity. 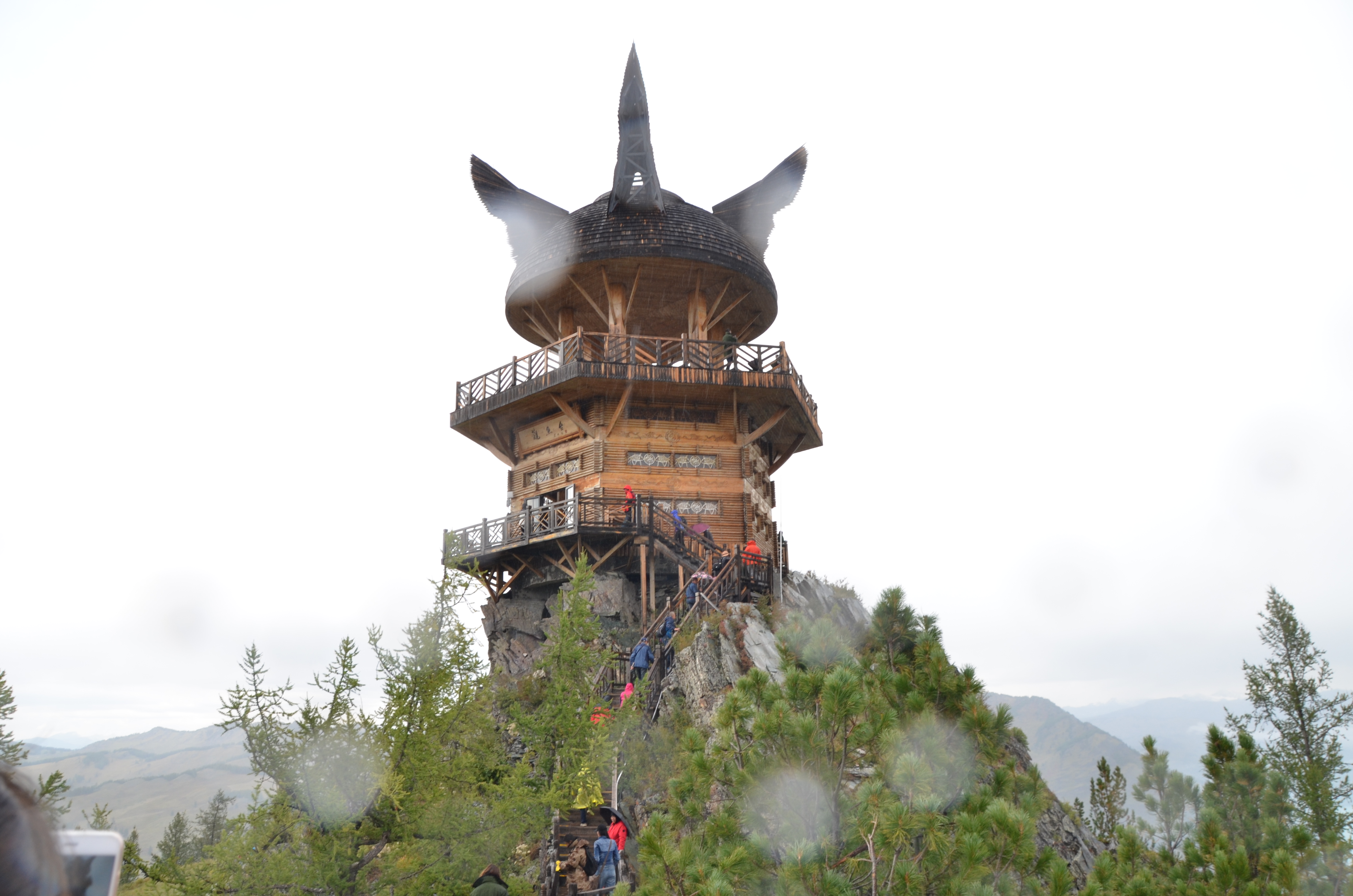 The pavillion is called the fish-watching  platform.

Then one went down. It was just so beautiful. It was such a joy to have this trip because it is so clean.

Kanas Lake is  famous also for changing colour with seasons and weather change in spring, summer and autumn. The water color is actually steel grey in May, light green or bright green in June, milky white with slight blue and green in July, dark green in August, and emerald in September and October. From November to next April, it is the icing period, when the whole Kanas Lake becomes a silver white world, the color  still changes

due to sunny or cloudy days and to high or low clouds. 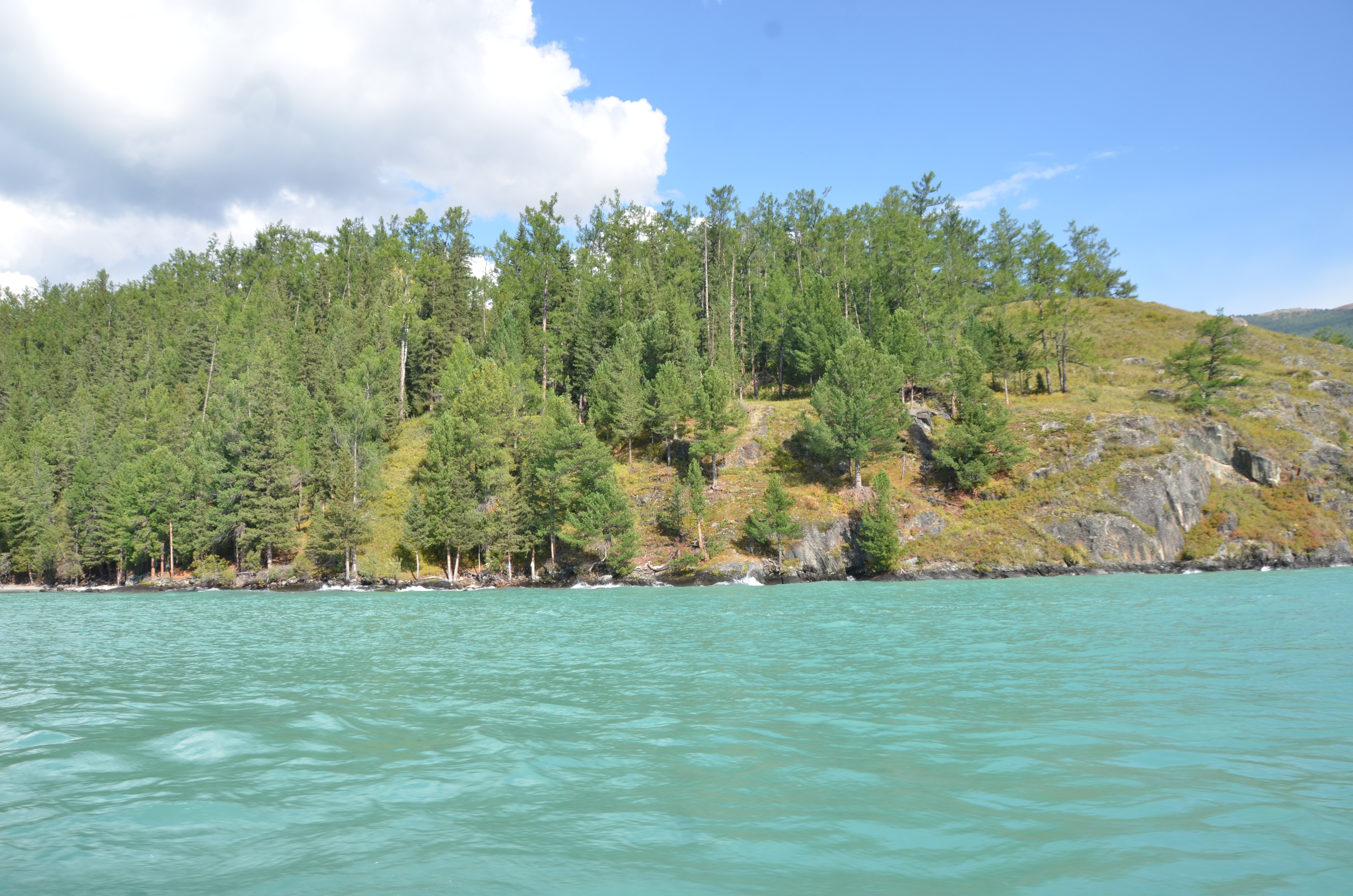 In the afternoon, the journalists took a sightseeing boat floating on the lake.  They experienced the beautiful water scenery and took a lot of photos.

Kanas lake with a history of about 200 thousand years is like a crescent,with the altitude of 1.374 meter, 24.5 kilometer long, 2.2 km wide maximum, 1.87 kM wide and the depth is 120 meters on average. and 197 meter deep maximum. Boasting an area of 45.78 km2, the lake has a storage capacity of 5.4 billion cubic meters , equivalent to 4 cubic meter for each of the 1.3 billion people in China.  It is also the deepest freshwater lake in China.

The fairy tales about water monster are spread here among the people, it is suspected that there are huge fish in this lake to welcome the people. 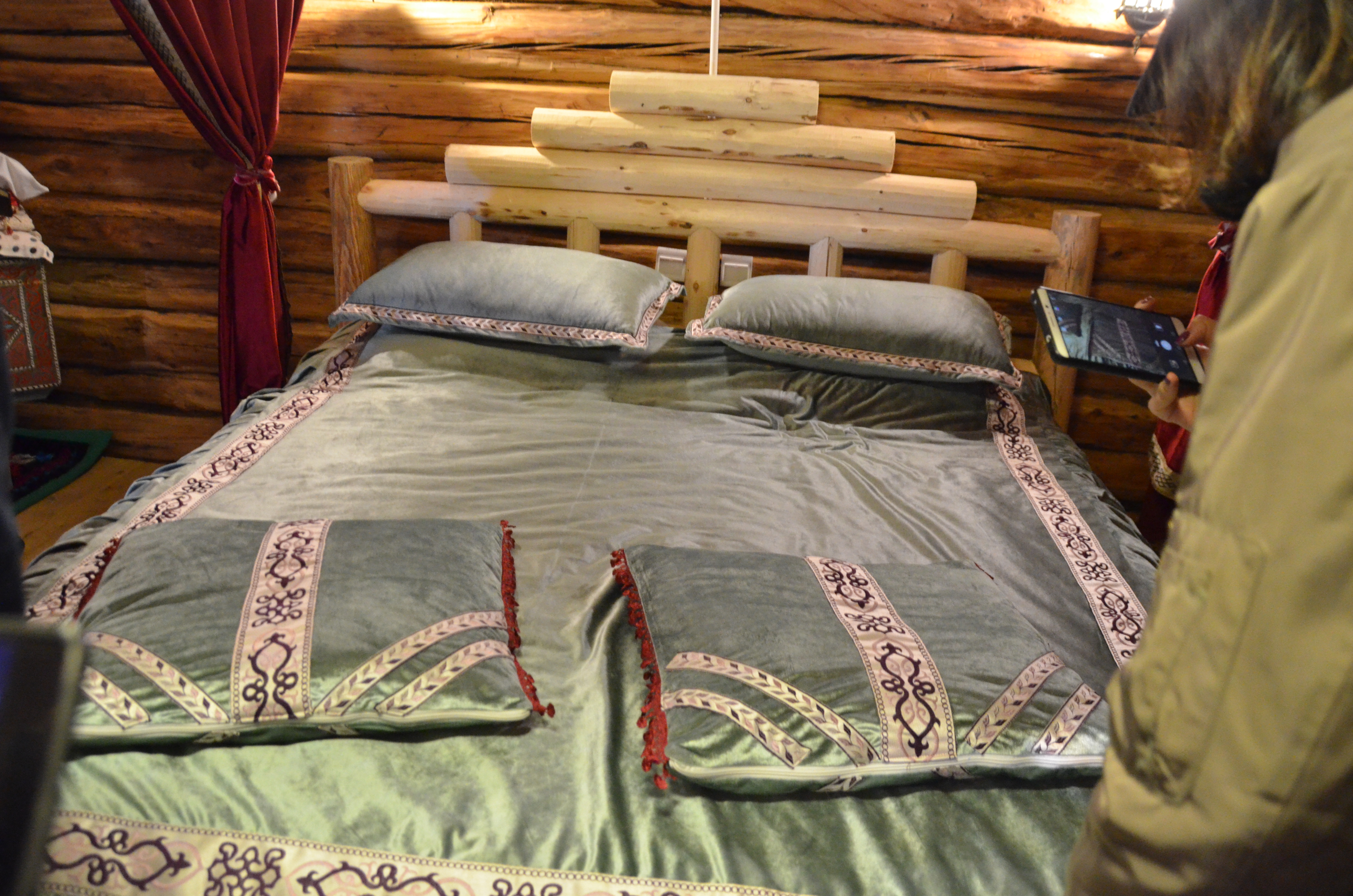 Kanas Lake, in the middle-mountain forest belt at the southern foot of Altay Mountains, is a loop moraine barrier lake through glacial scour in the quaternary ice age. Huge glacier covered Altay Mountains and then slid downward along the mountain terrain due to its gravity. During the process, the glacier bottom and the massif has strong friction and caused extrusion, transportation and digging, then the front end of the glacier melted gradually, the meltwater discharged downward, and tills accumulated in large quantities at the mouth of Kanas Lake, forming a loop moraine of about one kilometer wide and 50-70 meter high, which barred the valley, where meltwater from glacier and snow collected year after year to gradually form the beautiful Kanas Lake today.

Sleeping one night in Friendship Peak in Buerqin,  we headed for Yuehu Hotel to see the Kanas Lake.

Kanas Lake, deep in Altay mountains is within the scope of Kanas River basin, with the supplementary water mainly by melt water from the Friendship Peak and the Kuitun Peak, Altay Mountains and precipitation over the lake area. Kanas River with its rise in the Kanas Glacier at the Friendship Peak, the highest peak of Altay Mountains, 125 km long in total, flows from the northeast to the soutnwest and meets Hemu River at Jiadengyu to become Buerqin River, which finally goes into Irtysh River. 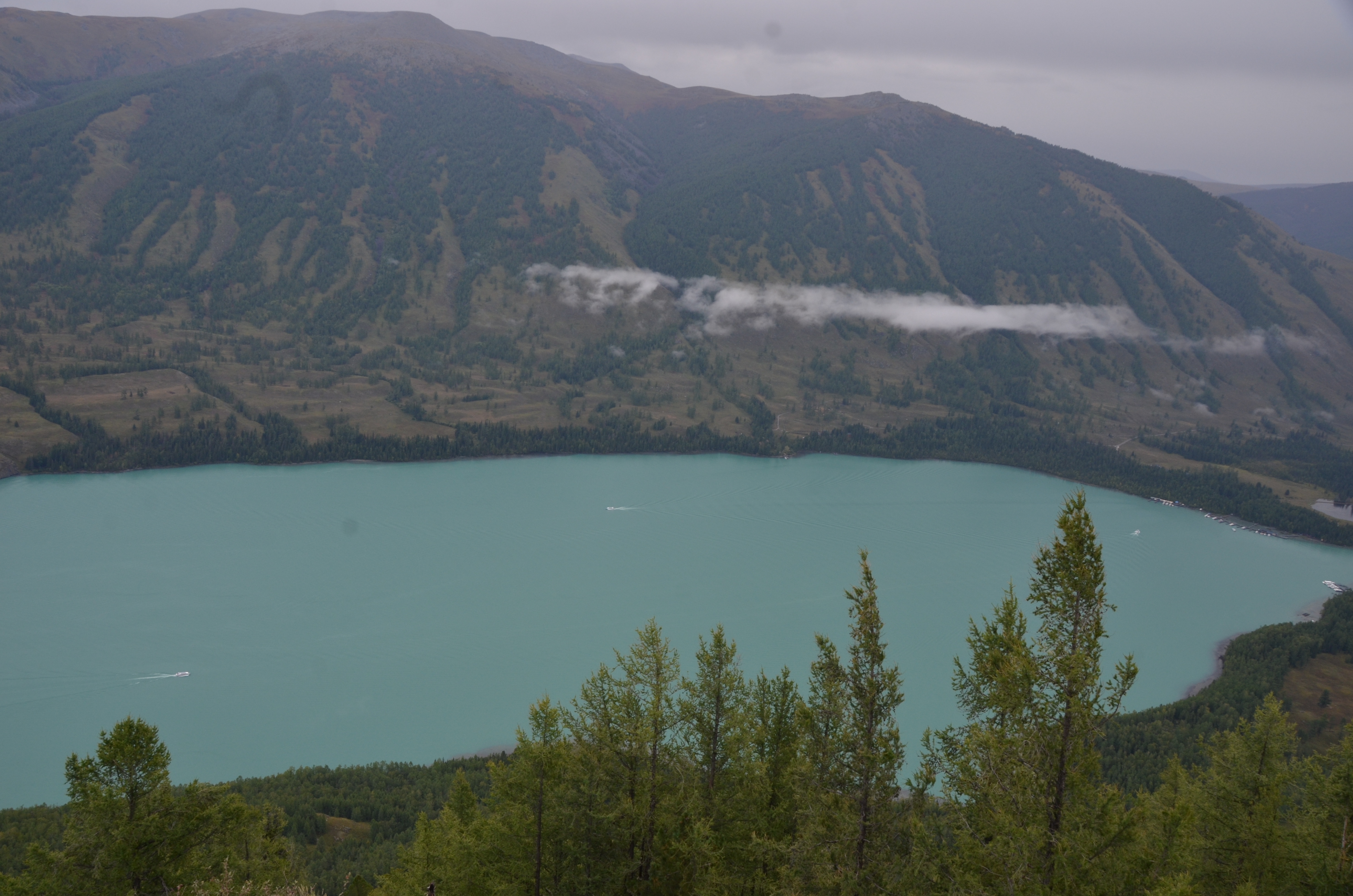 Kanas Lake is the core and cream of the state-level Kanas Nature Reserve, and a highlight of nature, where the natural ecological environment remains primitive with mountains embracing in manner of layer upon layer, dense forest, lush meadow, clear water, blue sky, green mountains, white clouds, snow-covered peaks, and grassy marshlands…all in an integral whole, and all too beautiful to be absorbed completely at once. 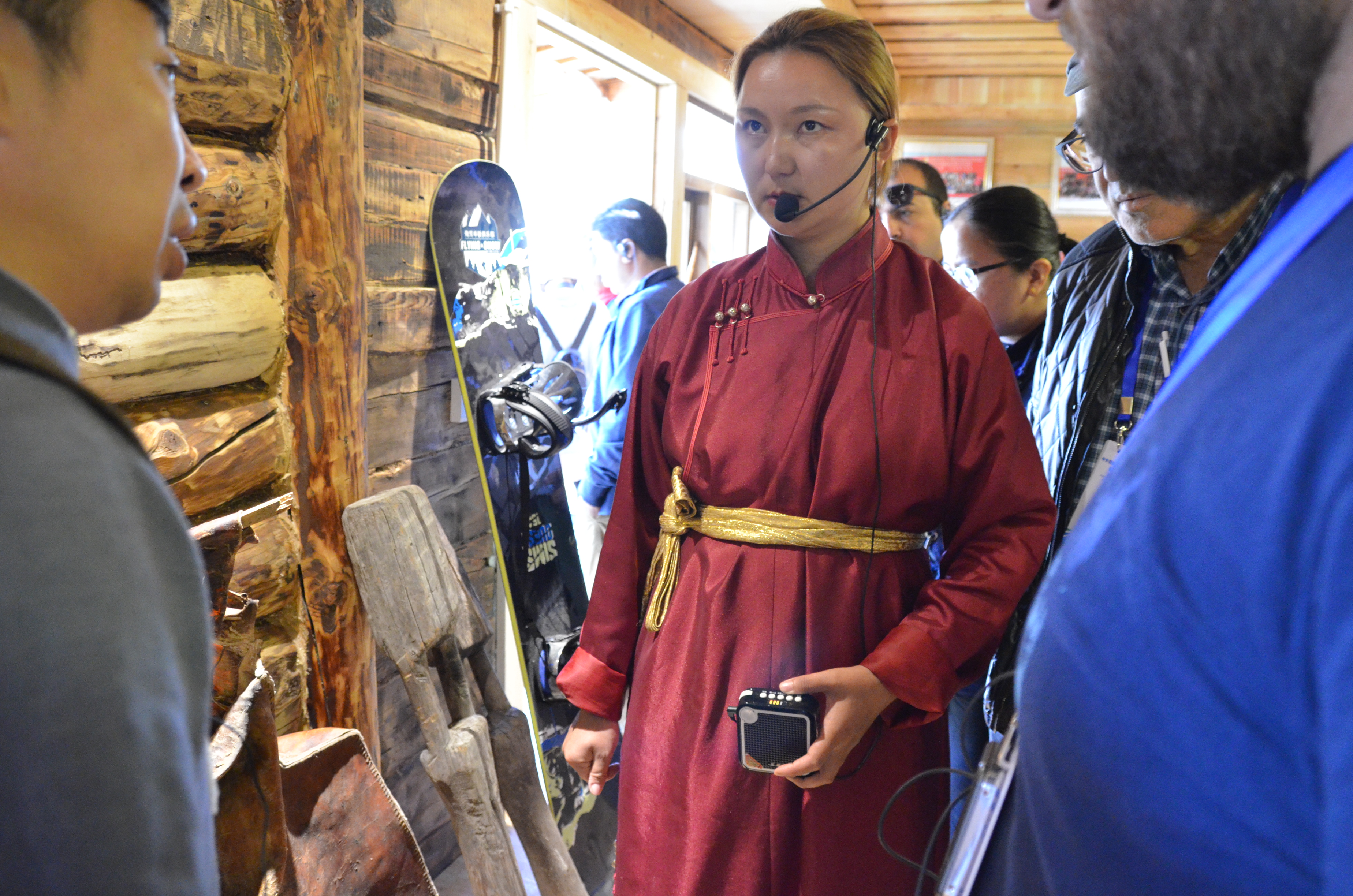 A beautiful Tuwa woman Ouchun welcomed the journalists to a wedding room first.  She explained that the wedding room is a pure wooden house without any spike. The house was built with tree trunk. And they put moss into the rift between wood blocks. Ouchun explained that this was the traditional way of building tree house and the moss will become shrinking in winter and blossom in summer. They also put liquid of pine trees into the wood. 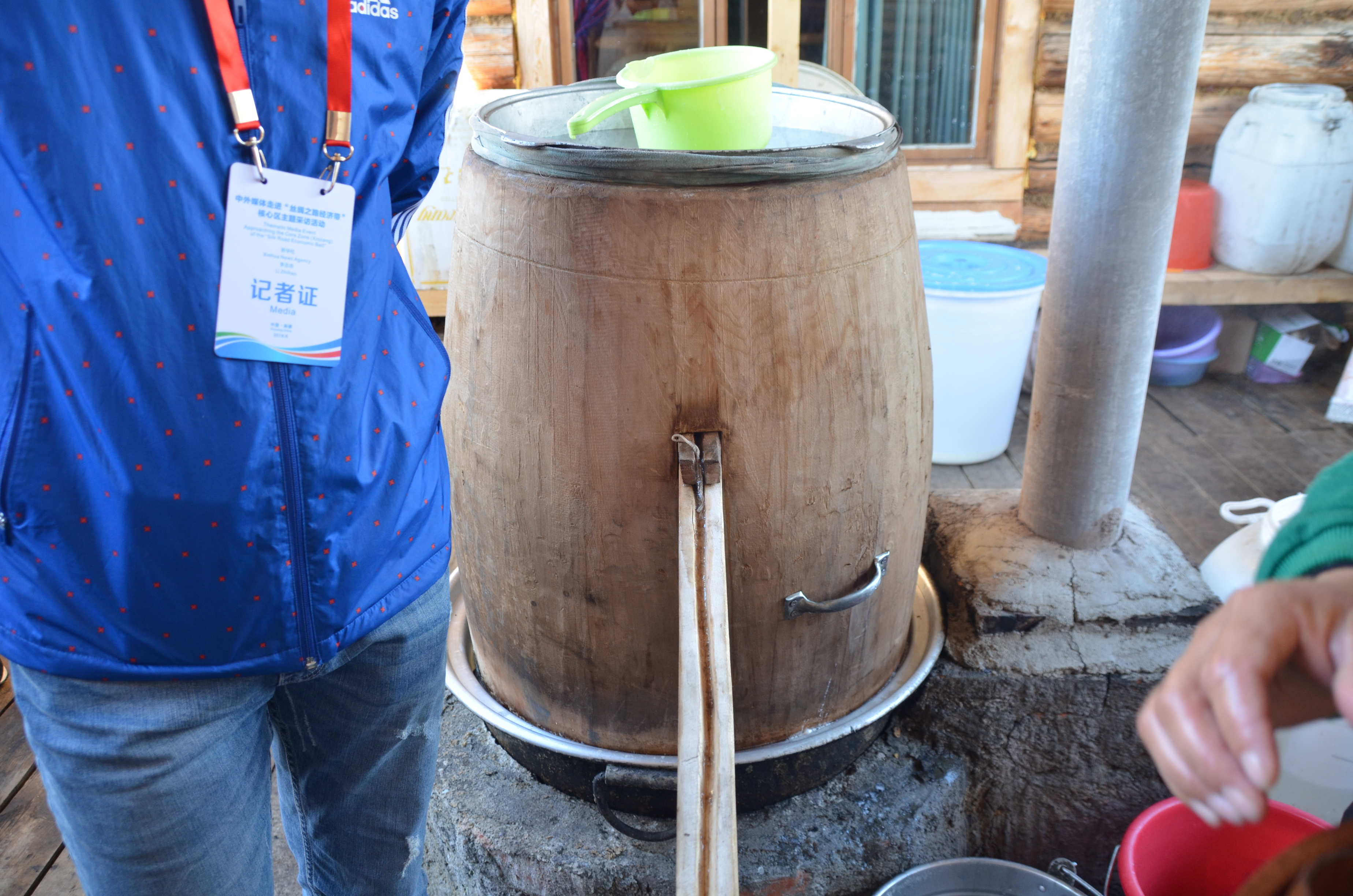 Ouchun said all the quilts, mattress and furnature are made by themselves. In the family exhibition room, they hold a photo of the PLA doctors came to them to treat the patients and the people here participate national skiing meeting in 1958. 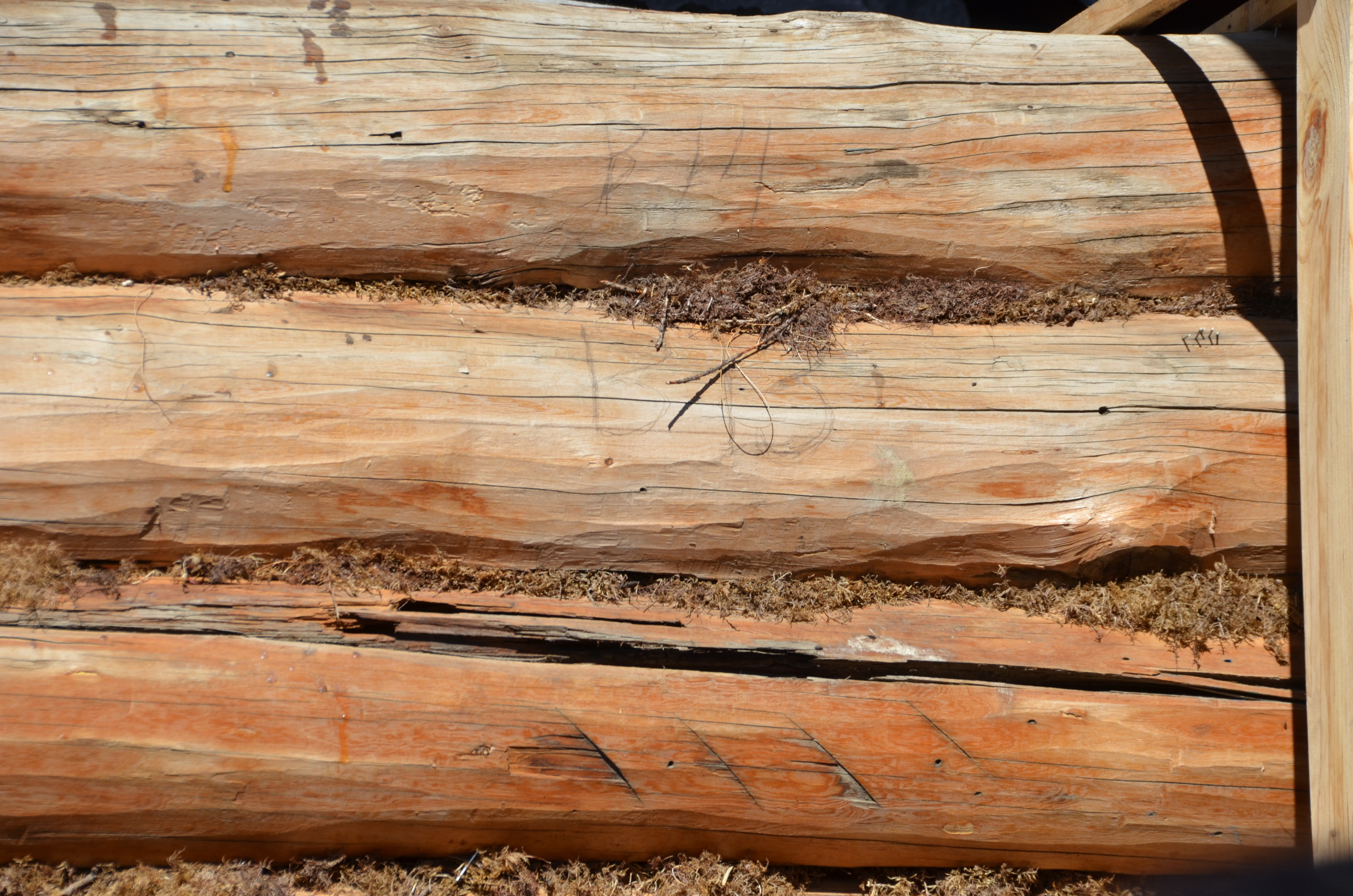 Ouchun said the most special thing for this cooperative is to make the skin skiing board. They will help to go up the hill easily  to prevent backward falling and go down faster. 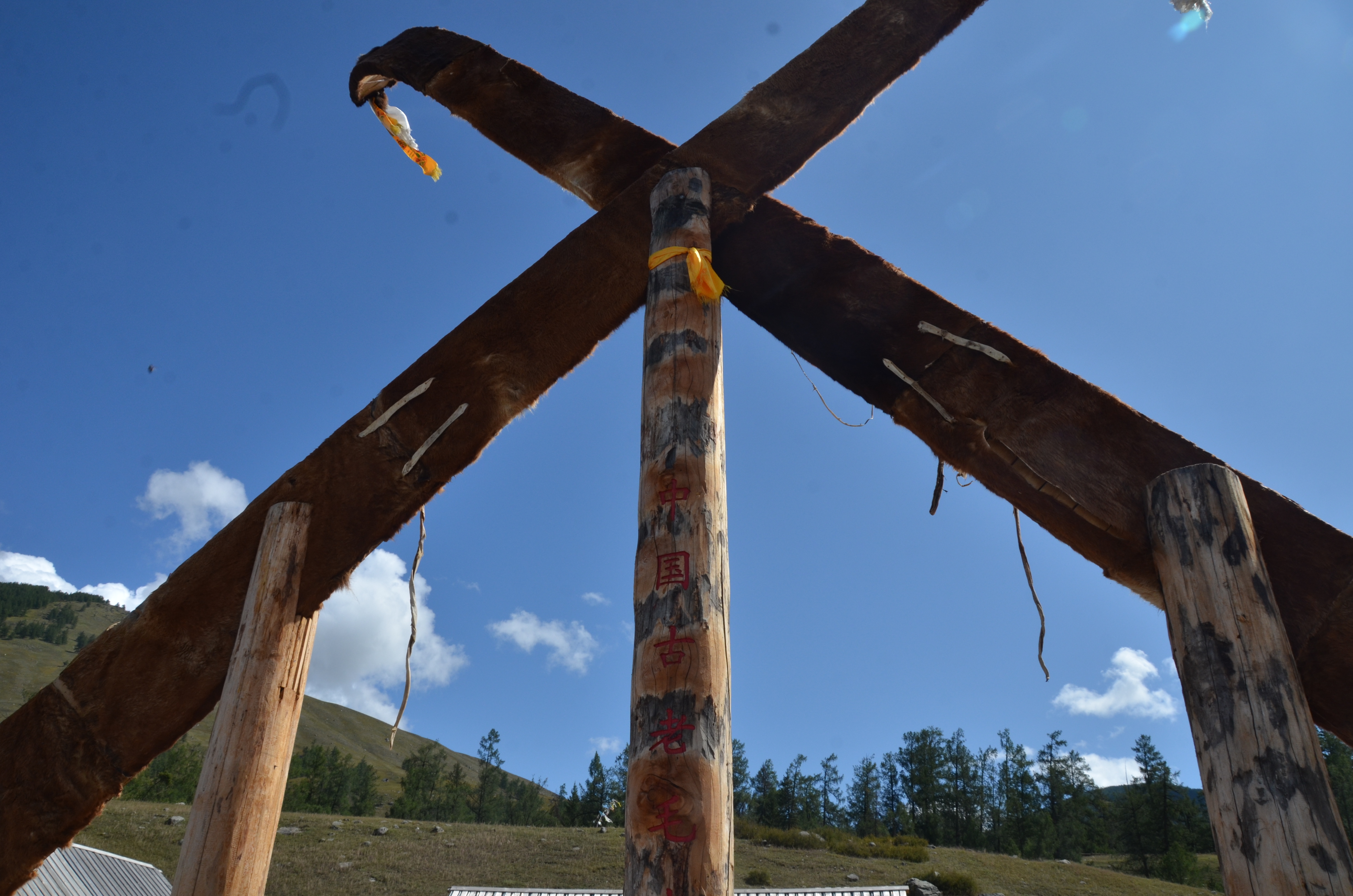 The family has about 20 members and they have 12 rooms. The whole cooperative has 25 rooms with the construction area of 800 square meters and 8 artists to exhibit and sell more than 100 kinds of products and present shows of songs and dances.

In 2017, the Cooperative realized operating income of 500 thousand yuan .  It has attracted 50 thousand tourists accumulatively.

The ecological house style is Mongolian Tuwa  style, but also very similar to the Swedish style. 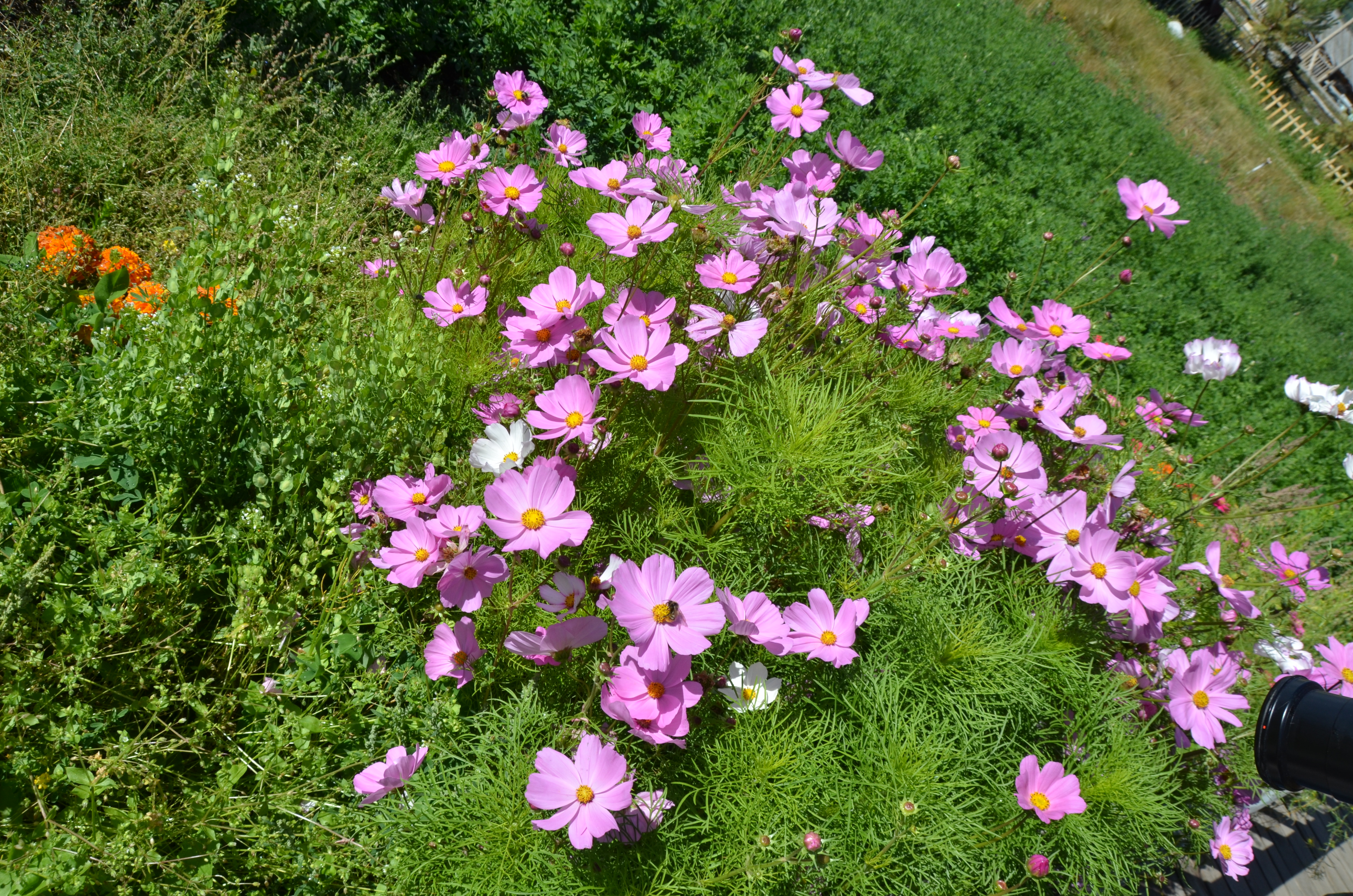 Ouchun said it is estimated that there are only 2000 Tuwa people whose ancester was Mongolians.  They have developed more and more tourism now. But they also rely on animal husbandry. 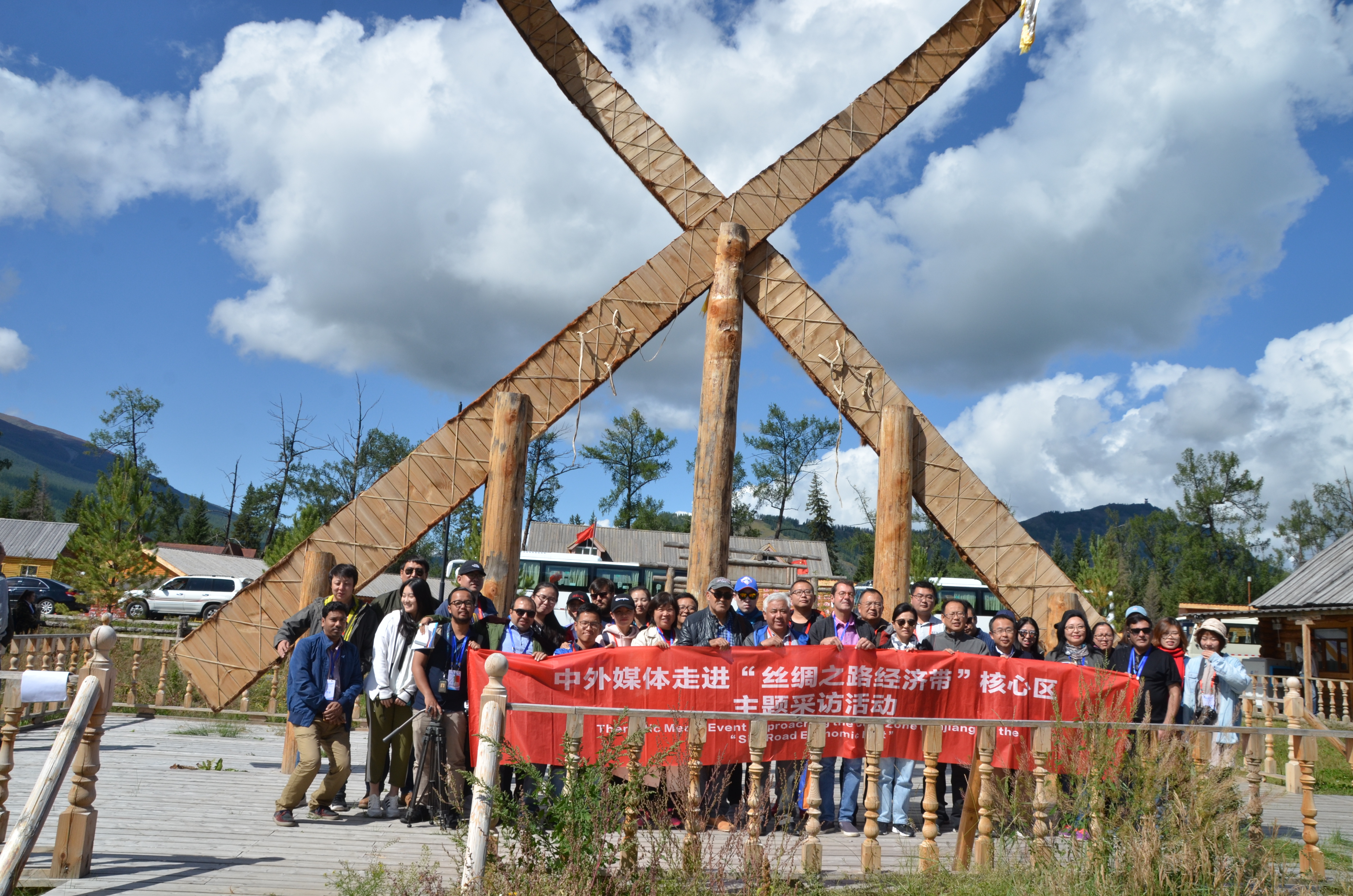 Finally,  all the journalists entered into a Mongolian style dome house and listened to the artists performance. 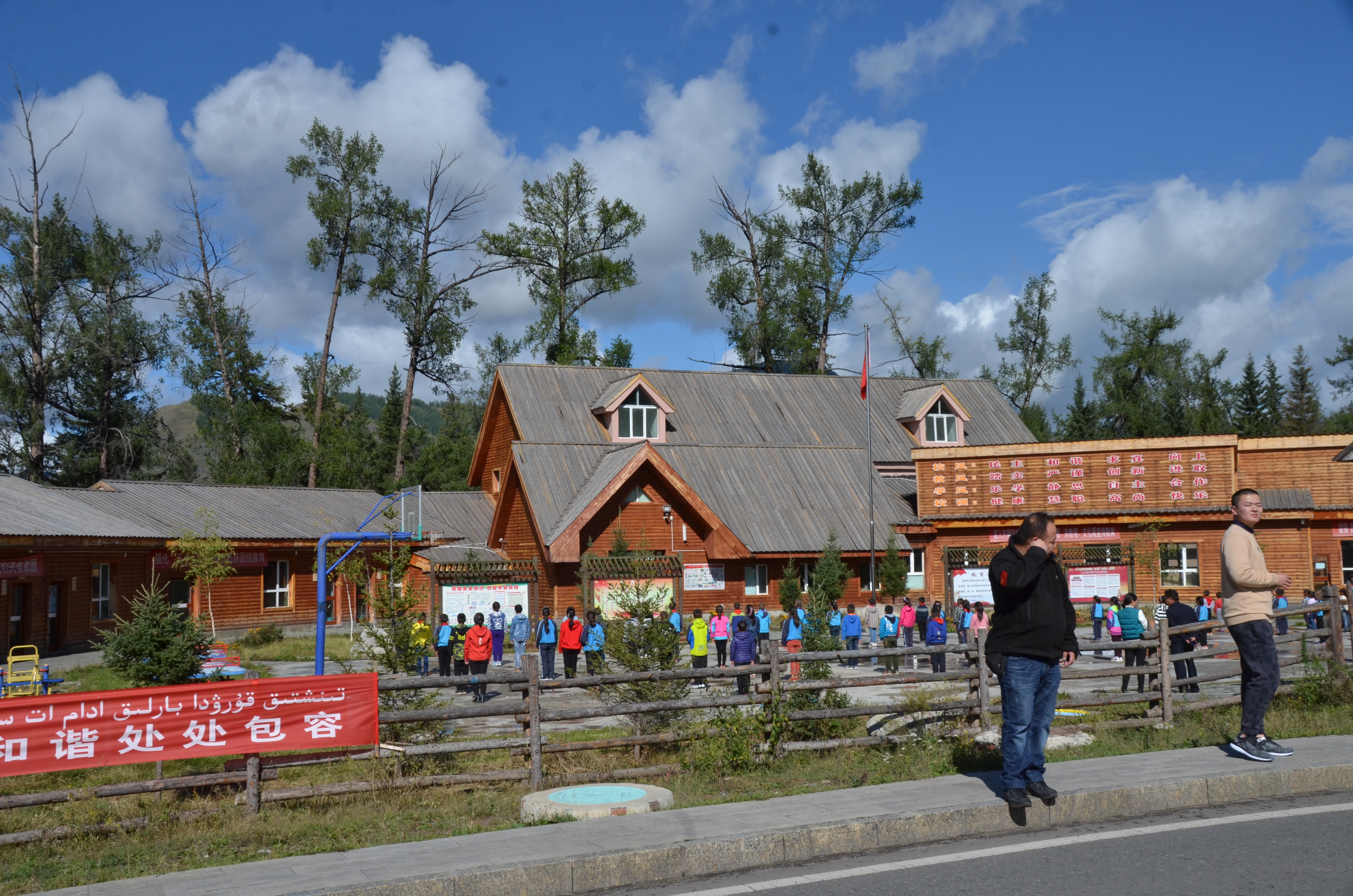 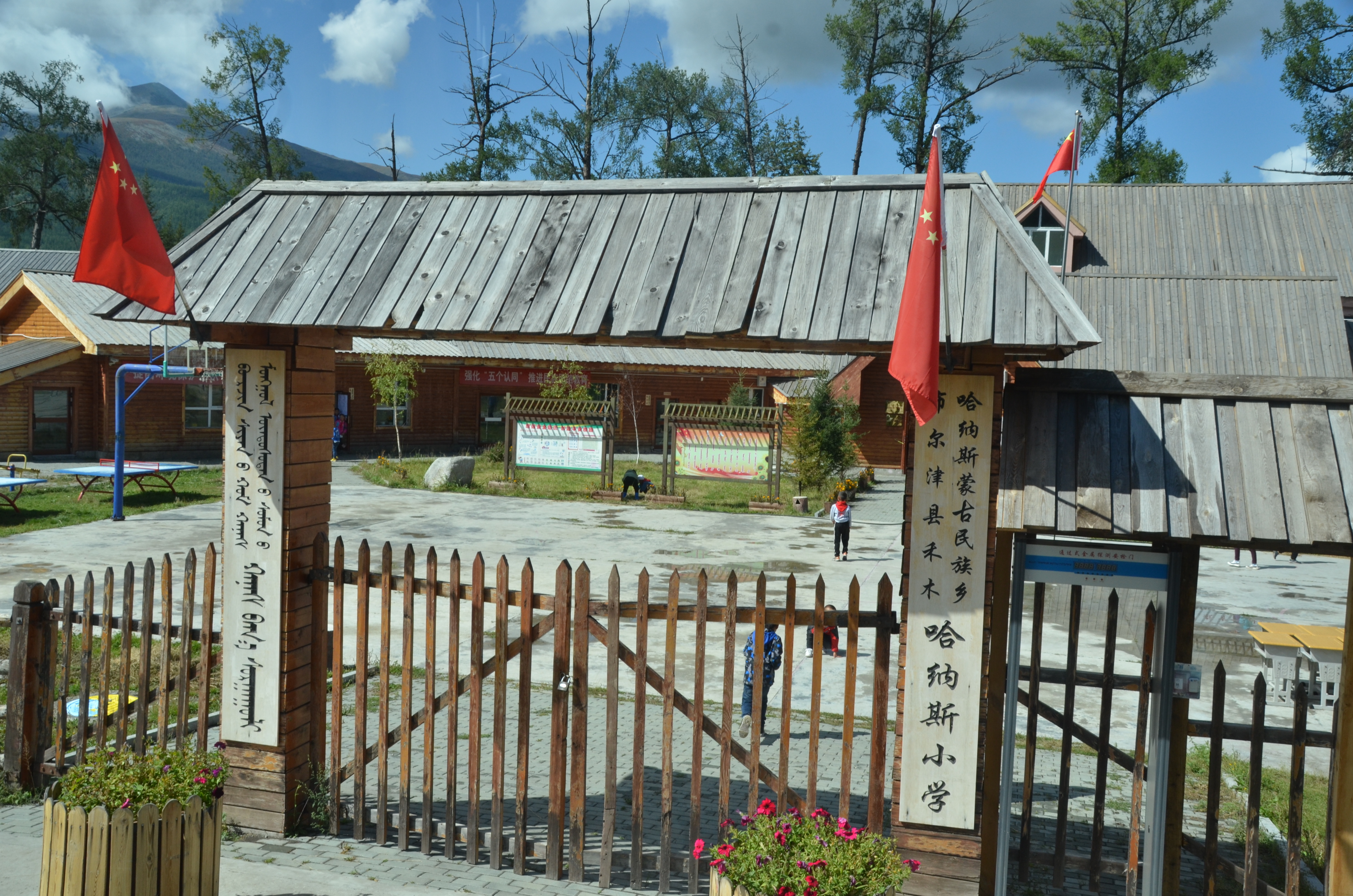 They have a primary school here with 100 pupils. When they go to middle school, they will go to the county to have boarding school. 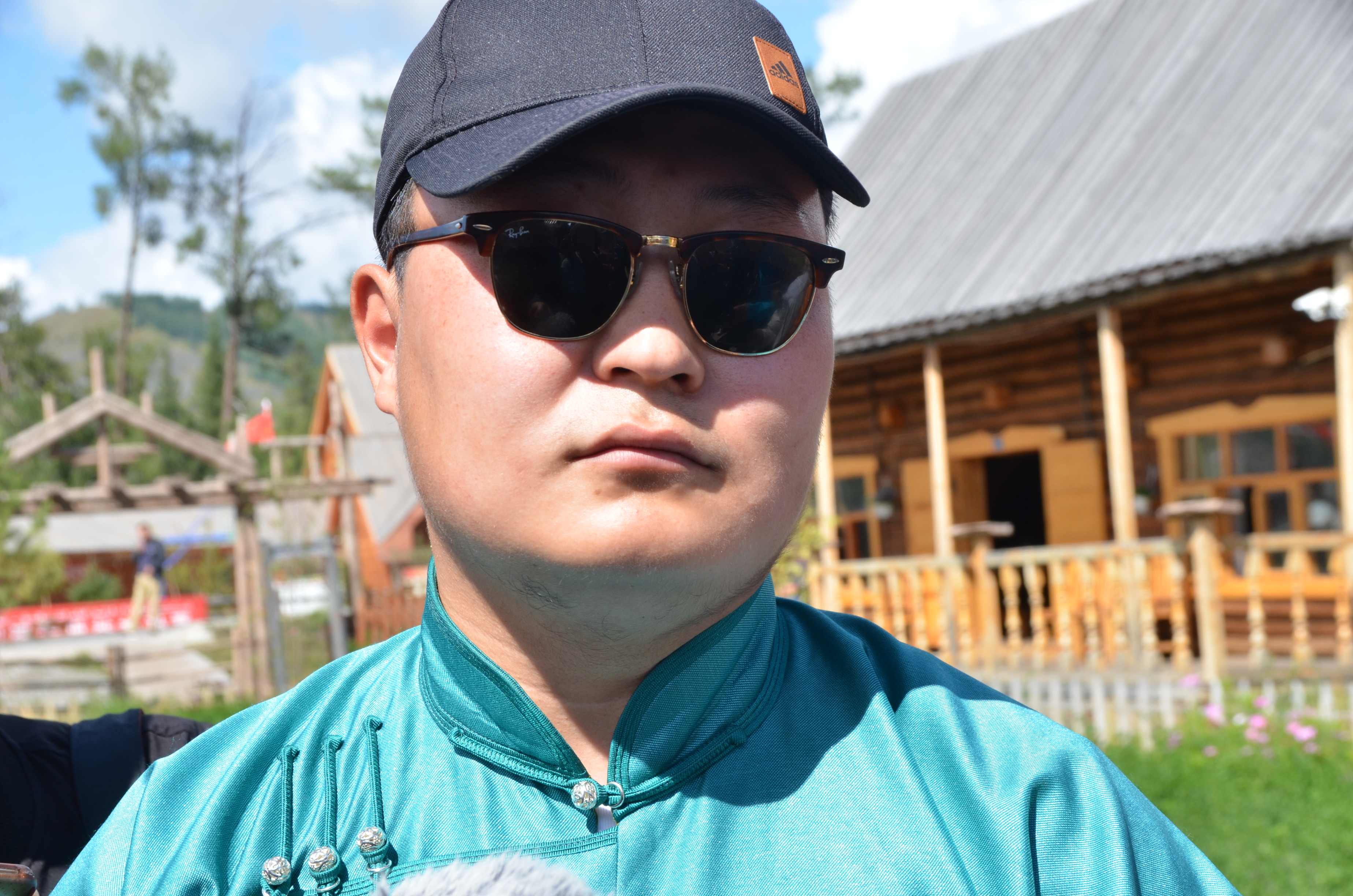 The artists performance were wonderful and with welcoming wine ceremony people also observed how people made milk wine. 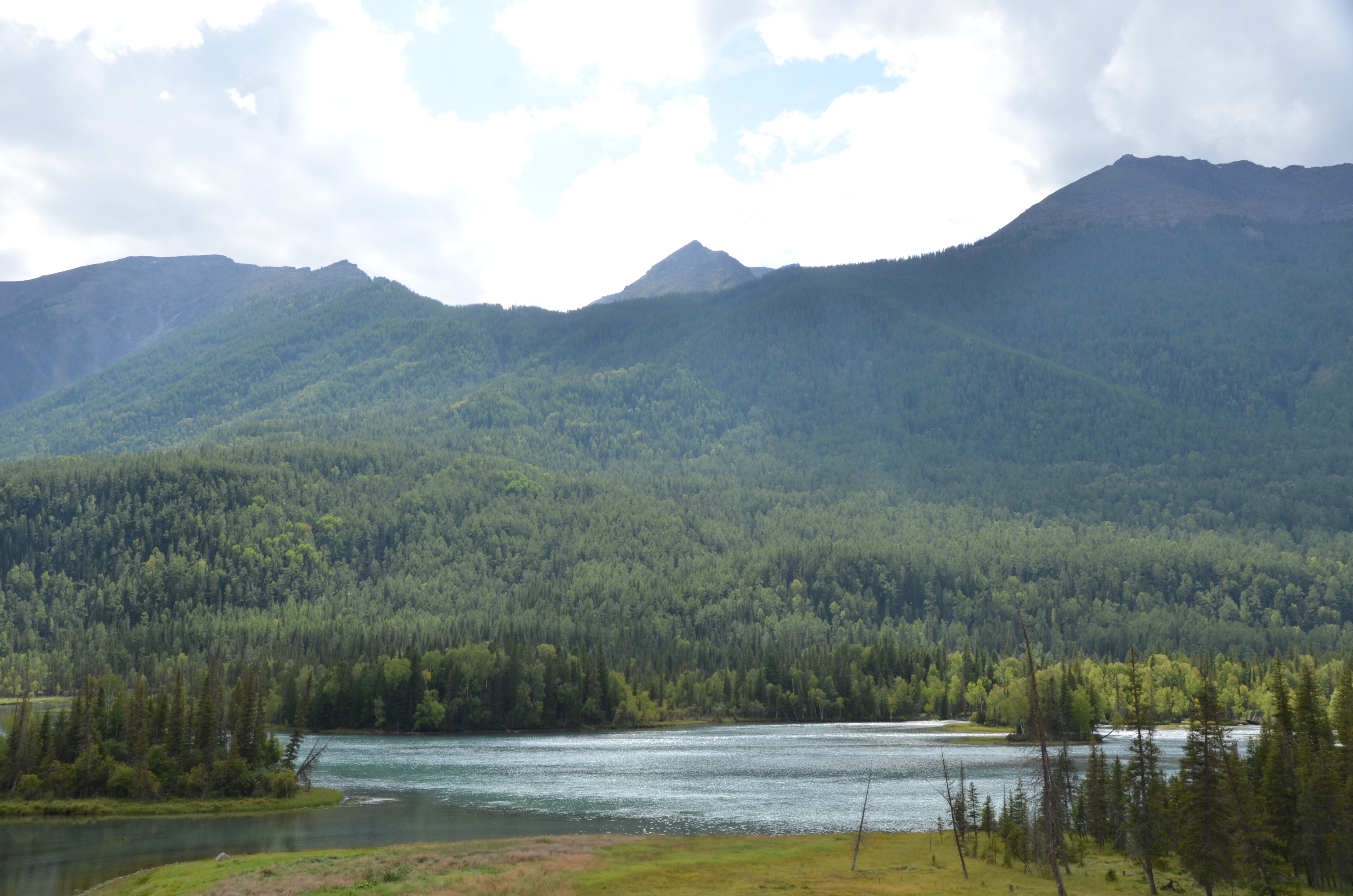 After this trip, people went back to the Yuehu Lake Hotel and had lunch.  The lunch was delicious because it had a good variety of food. 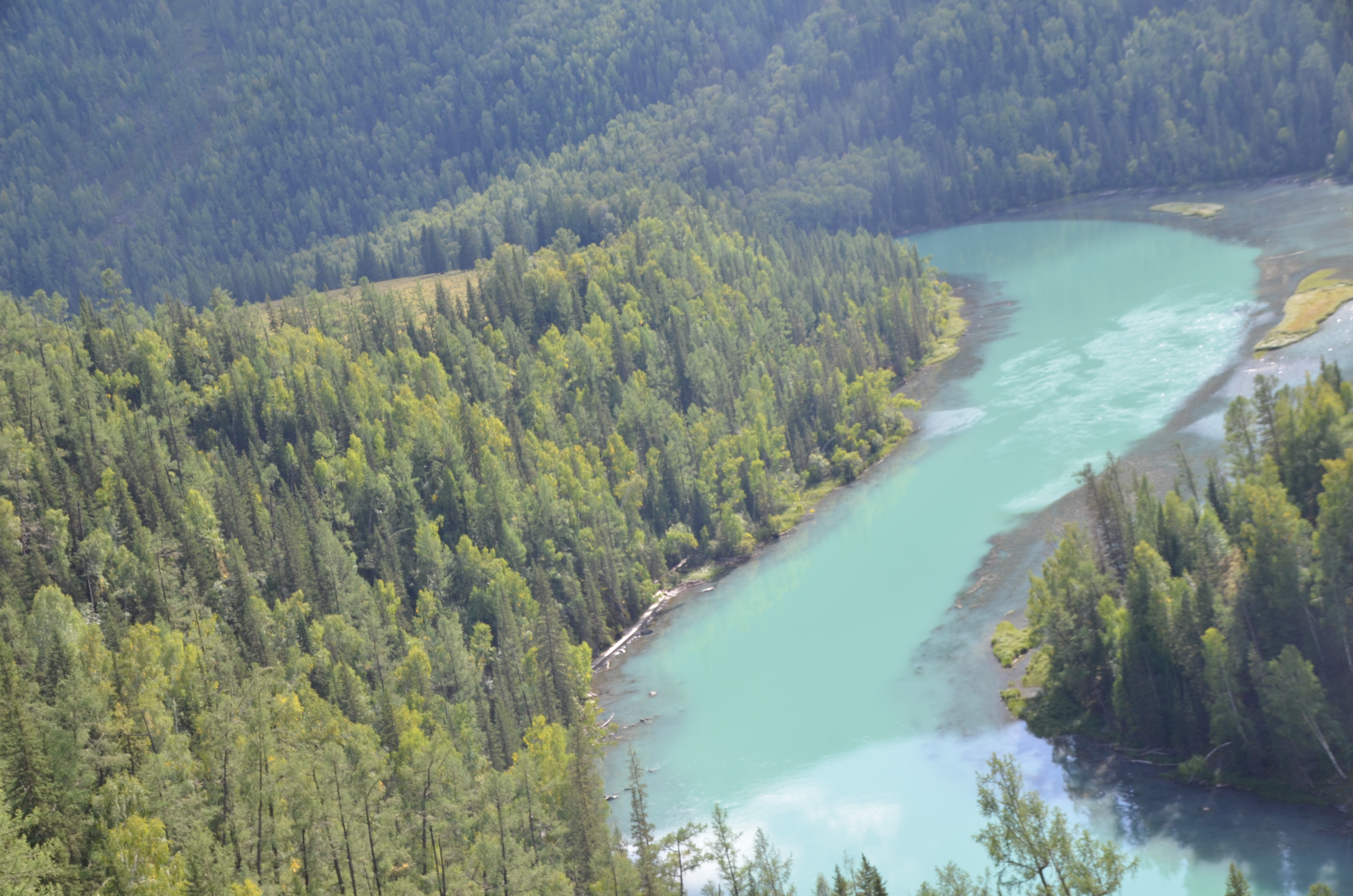 In the afternoon, the journalists went through the fairy bay of the Kanas River. 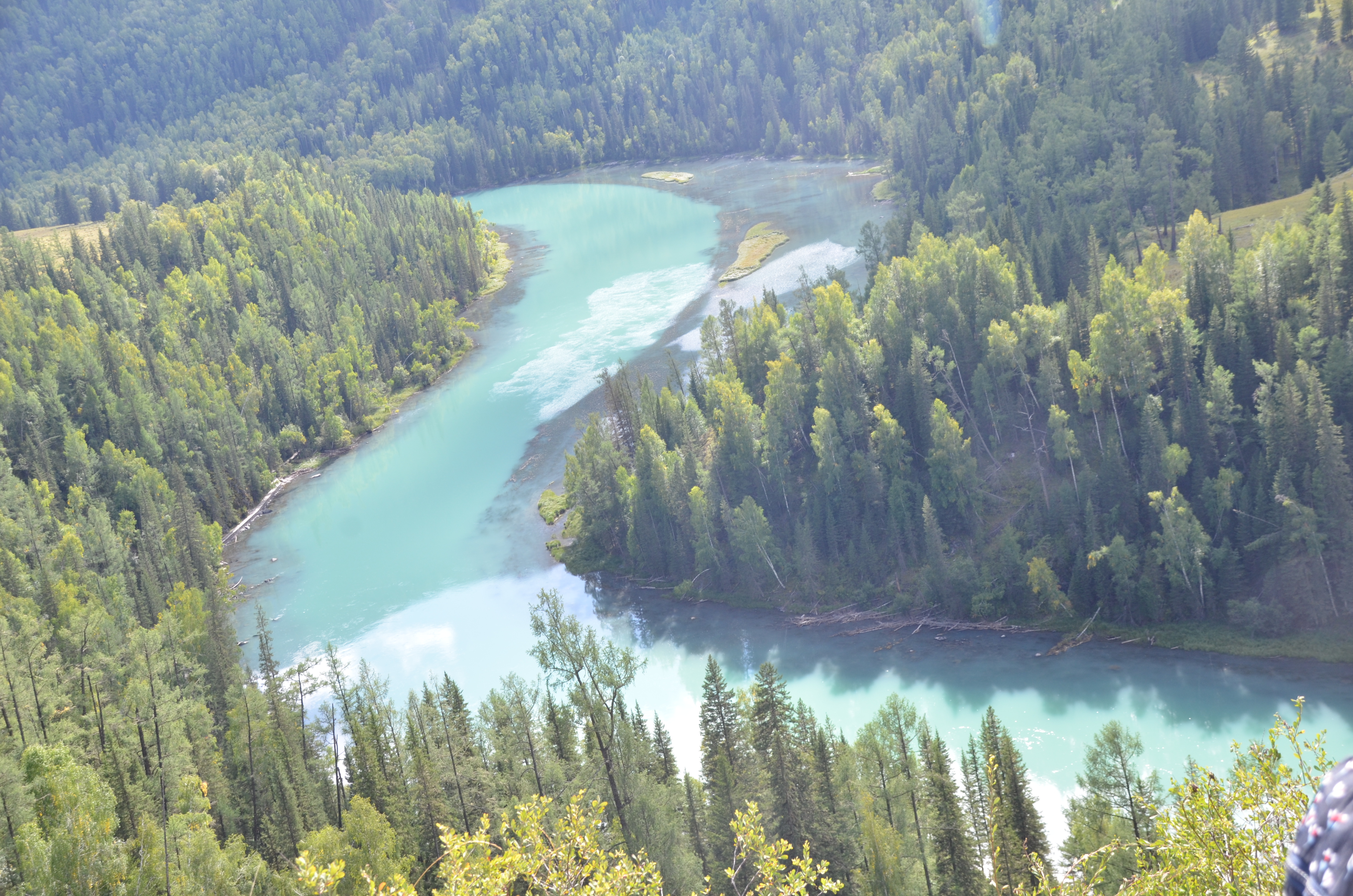 Then they stopped in the Moon Bay before they came to the lying dinasour bay. 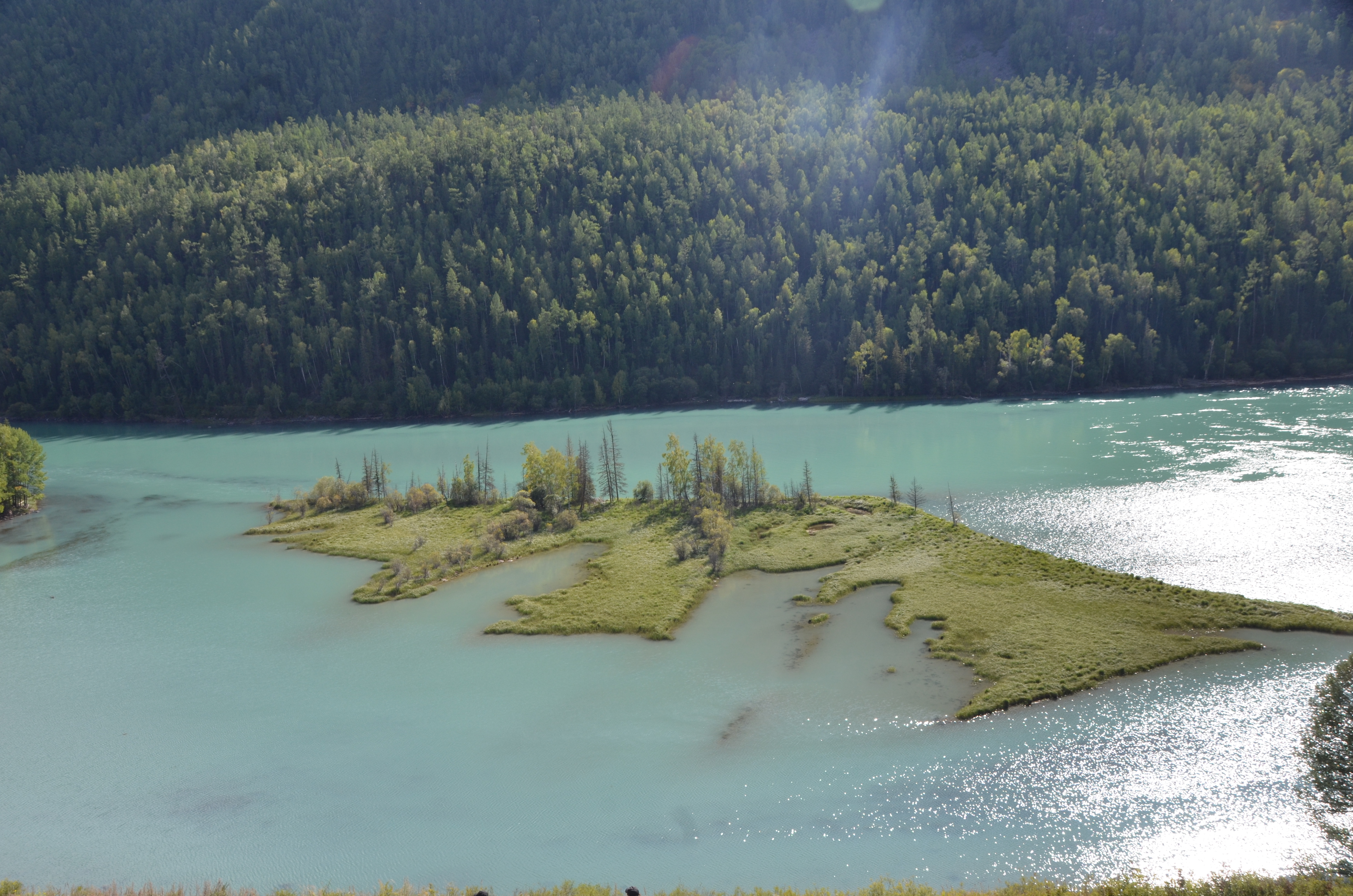 By the end of the day, they arrived in Hemu Hotel with Swedish wooden house style.

The tree trunk here is far better than that in the cooperative. This is such a high level hotel which is very customer friendly. Outside in the yard, there are all kinds of plants and flowers. Canal streams flow naturally with fishes swimming in it.  It is such a beautiful place.

All these natural resources with huge investment from the government and the priority on tourism make the local herdmen benefit a lot in recent years. 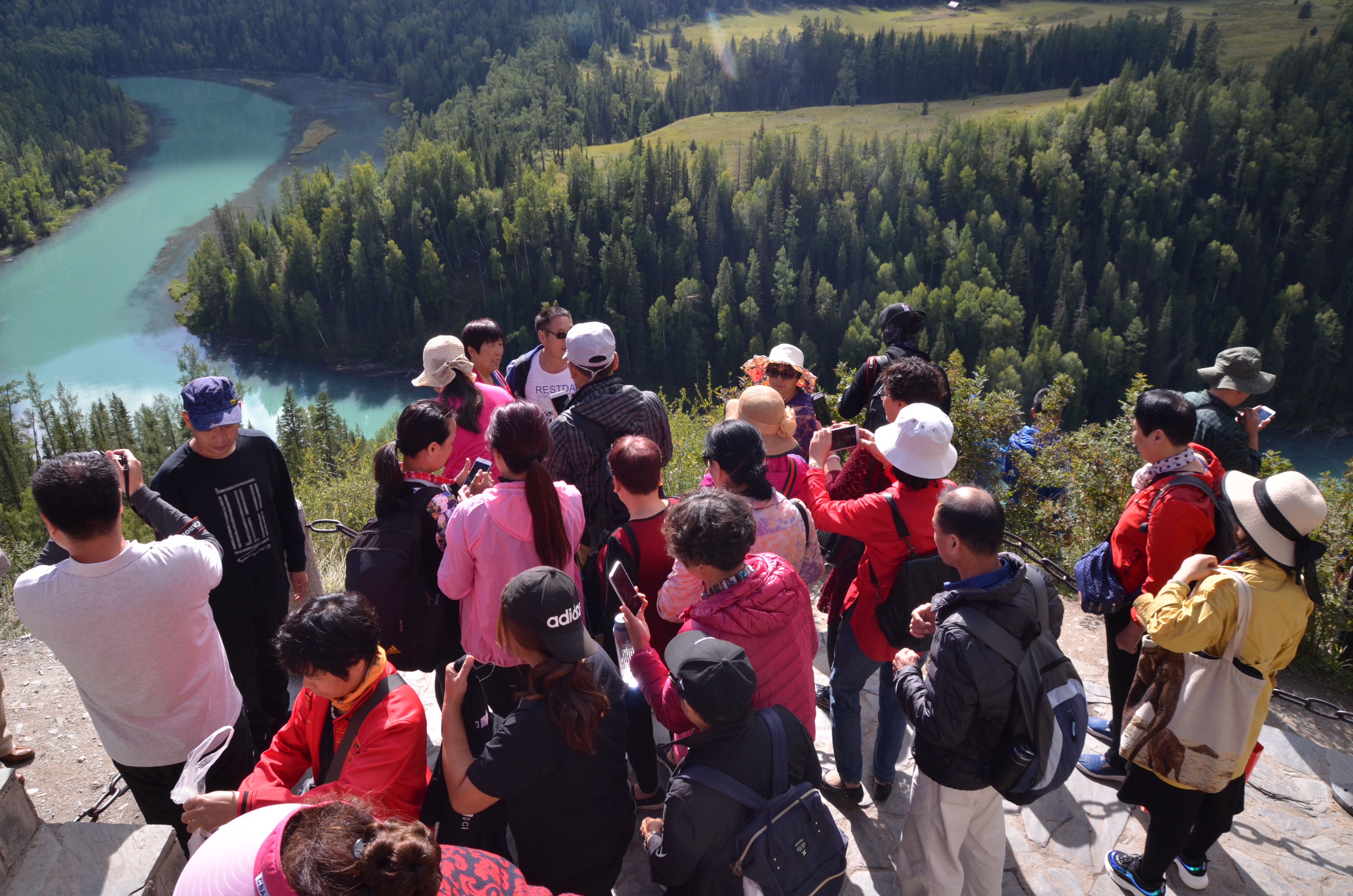 The theme of this trip was to visit the tourist sites themed on Silk Road Economic Belt.  It’s obvious that the Chinese government has invested heavily in Xinjiang’s Altay prefecture and support the local policy of putting ecological construction on priority and realized the green development.