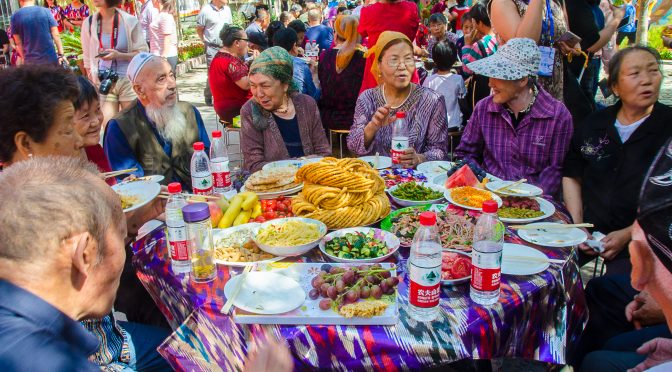 STOCKHOLM, Nov. 27(Greenpost, chineseonline) — While the dark and rainy weather made people sad and lonely, a warm Xinjiang Photo Exhibition has been held in Stockholm recently.

The exhibition was held by Green Post(www.greenpost.se) and Chinese Online(www.chineseonline.se) in cooperation with China Europe Cultural Association and ABF(Swedish Workers Association) at the citykonferensen in Stockholm.

Xuefei Chen Axelsson, Chief Editor and photographer of Green Post and freelance journalist said the exhibition came against the background that she was invited to attend a journalistic trip to Xinjiang in August 2018 together with journalists from 13 countries along the belt and road routes. And after that she went to Xinjiang twice respectively in March to Turpan after the National People’s Congress and National Day celebration in Beijing to personally experience the atmosphere in Urumqi city, capital of Xinjiang Ugyor Autonomous Region.

“I was impressed by the journeys and felt that Xinjiang now is very safe to travel and the cultural and tourist resources were rich. During my journey, I can feel business in Grand Bazar is booming and the ugyors dancing and singing were wonderful. Thus, I like to share this feelings and impressions with all the people who are interested in Xinjiang. “said Chen Axelsson.

The purpose is to share the information about the living picture in Xinjiang. The exhibition focuses on Xinjiangs infrastructure such as the fast train, subways and wide road, busy business in Grandbazar, music and art, dancing, beautiful scenery and environmental protection.

To let people have a taste of Xinjiang music and song, Luan Dehan played violin Why the flower is so red.

Artist Zhu Yingying sang the song which was about love between a woman and a ugyor soldier and moved all the audience. A whole generation of people were moved by the film and the song in China’s 80s.

Duan Maoli, President of Swedish Anhui Sci-Tech and Commerce Association expressed his appreciation for the exhibition.

He said it was impressive to see these photos. Watching these beautiful pictures let people feel the life there is quite colourful and it is easy to visit there with Air China because the airlines can fly there directly from Beijing. It can also fly directly to other cities.

During the exhibition, Xuefei Chen Axelsson also made a presentation about the pictures and added more pictures about the daily lives there in the Grand Bazar. She illustrated the stories behind every photo.

During the exhibition, Axelsson also answered some questions.

Many visitors said they learnt a lot about Xinjiang and felt glad that the situation is safe and secure and life is lively there. Some even said they like to visit Xinjiang some day.