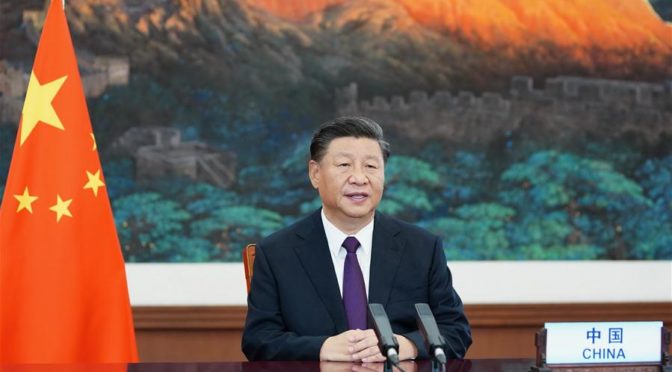 In Chinese the ceremony was called China’s 70th anniversary of sending voluntary army to the Korean Peninsula when a civil war was fought and with the request of North Korea.

He used a lot of glamourous words to praise the Chinese army’s courage describing them as being heroic, persistant, undefeatable, flexible and not afraid of big power with advanced arms.

Even though he used a lot of inspiring words to describe such a great deeds China has done, and it seems to be the first time that Chinese leader summarised such a battle and gave such a high level appraisal of the war.

In fact, China was almost curfewed by the west after its liberation in 1949 and felt very isolated. Many historians studied why China dared to send volunteers to the Korean Peninsula even though China was very weak at that time.

With the disclosure of many secrets 50 years ago, historians got to know that China was forced to take such a bold decision by Mao Zedong to face the strong fleet led by American General MacArthur, the five star General in America.

China was really worried that the warfire would be burned to China’s northeast across the Yalu River. Thus China sent the voluntary troops to the Korean Peninsula. People have to say that the Chinese army was brave and experienced under the leadership of the Chinese Communist Party.

Even though Xi used a long chapter to talk about this great history, what he really liked to express was China’s fundamental principles:

Xi stressed again that the world is a destine shared community, thus should support each other, look for win-win solution and achieve a win-win result.

Xi also expressed that countries around the world should search for peace and development.

“The Chinese nation has always upheld the concept of “being kind and showing kindness to neighbours.” As a responsible major country, China adheres to the common values ​​of peace, development, fairness, justice, democracy, and freedom of all mankind, adheres to the global governance concept of extensive consultation, joint contribution and shared benefits, and unswervingly pursues a road of peaceful, open, cooperative and common development. As long as we adhere to the path of peaceful development and work with the people of all countries to promote the building of a community with a shared future for mankind, we will surely be able to usher in a bright future of peace and development for mankind!” President Xi said in his inspiring speech.