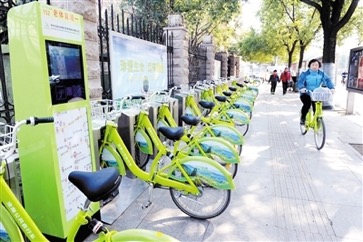 Zou Yi: An enthusiast of environmental protection who takes photos of the sky everyday

Jiankou, a section of the Great Wall located beside Xizhazi village, Huairou district of Beijing, is frequently visited by a group of outdoor sport fans on Saturday, who collect garbage with the white plastic bags tied to their camping bags. The visitors all come from a volunteer group named “Giant Gooo-go Great Wall.”

“I spotted this beautiful place when visiting the nearby Mutianyu section of the Great Wall several years ago,” said Zou Yi, initiator of the volunteer group. The Jiankou Great Wall has seen more and more trash after it gained popularity, therefore Zou started collecting garbage with the volunteers since September 2013. By now, more than 3,200 volunteers have joined the campaign.

He was once asked during an environmental protection activity how he got to the event. After the activity was finished, he received a letter from the organizers which listed a record of the transportation energy they had consumed on the way. This made Zou realize that each social activity involves energy consumption and carbon emission. “Ever since, I have chosen a green lifestyle,” Zou said.

In order to draw more public attention on air pollution control and a green lifestyle, Zou has posted photos of the sky taken by him in the same place every day on social media platforms.

“Although judging air quality by photos is not very scientific, the combination of a year’s pictures is quite informative,” Zou explained. By now, his pictures have been viewed for more than 50 million times.

Zou made his friends realize that environmental issues, such as smog, need joint efforts from both the governments and the public.

Such mindset shift was also echoed by a recent survey about public treatment of smog and environmental protection conducted by People’s Daily. Thirty six percent of the respondents consider smog treatment to be an issue of the governments and polluting enterprises, while 64 percent believe that everyone is responsible for environmental protection.

“We should start from subtle things in our daily life and change the lifestyles that are unfriendly to the environment,” Zou proposed, adding that choosing public transportation, reducing fireworks, as well as saving water and electricity will all contribute to the environment.

Though the subtle change made by each individual only has limited influence, it “will be a great power when united,” Zou added.

The Blue Map is a mobile application that enables users to check real-time monitoring data of discharging outlets of major pollution sources, including pollutant concentration, standard limits, exceeding rate, and emission. Users can also share the information through social media and report each case through the interactive platform of the app.

The application is developed by a non-governmental organization named Institute of Public & Environmental Affairs (IPE). According to Ma Jun, director of IPE, the application has received tens of thousands of reports after it was launched in April 2015.

More than 650 enterprises, including big State-owned companies, were urged for rectification as a result, Ma added.

“Information disclosure is the premise of the public participation in the cause of environmental protection,” said Ma, adding that the public will choose a green lifestyle and control pollution after they are given the information about environment, while a greater participation will improve the environment ultimately.

Currently, a total of more than 9,000 enterprises have publicized monitoring data on provincial governmental platforms as required. Ma also suggested environmental protection departments at all levels to better implement related laws and regulations.

After using natural gas for home heating, Li Wei’s family can spend a warmer winter at their house, which forms a sharp contrast to the chilling temperature outside.

Living in a two-storey house in Nanwangqiying village, Gu’an county in North China’s Hebei Province, Li said that natural gas heating has made his life easier.

“There is big space in my house needs to be heated. Before using natural gas, we needed at least five to six tons of coal for heating during the winter. Lighting a fire was inconvenient, because I had to wear a hat and a pair of gloves and usually turned out to be covered by ashes after a fire was lit,” Li said.

Cutting coal use has been given the highest priority to prevent smog in many smog-blanketed northern China in the winter season. Gu’an county, a close neighbor to the south of Beijing specializing in plant nursery, has been forbidden to use coal heating by the Ministry of Environmental Protection last July.

As early as 2014, the Nanwangqiying village has become a pilot village for the program of transformation from coal to natural gas in Gu’an, with 168 households having uninstalled stoves and started to use natural gas heaters.

The cost of using natural gas is a concern for the villagers. Li said that the annual cost of natural gas is nearly 7,000 yuan ($1,018), slightly higher than 6,000 yuan for using coal.

“We first felt unaccustomed to gas heating, which breaks away from our old tradition of using coal,” Li admitted. “But we heard people elsewhere frequently talking about smog. It is not only harmful to our health, but also causes vehicle restrictions and highway blocks that affect our daily life, trips and business,” Li said, saying he and his fellow villagers could understand and accept the extra cost.

In the meantime, the Nanwangqiying village has started to utilize solar heating. Ten households of the village now have access to solar energy, in a pilot program of solar heating carried out in Hebei.

Zheng Tengfei published an article on the internet at the end of last year, in which she urged people to reflect on their own rather than pouring complaints to government in the face of smog. Zheng believes that technological innovations and environmental education contribute to solution of the smog, but everyone must start from themselves.

The article was both praised and criticized. Many blamed her as making excuses for government. Zheng explained that she just wants everyone to realize that the environmental degradation is a result of human demand which has surpassed the tolerance capacity of the environment, and people can do more.

Being an environmentalist, she always collects advertising leaflets in the subways and wasted learning material for children to make paper planes, believing it could save resources. Her children like reading, but she prefers borrowing books from libraries than buying them.

She is willing to pay for such mode of circulation and sharing, hoping more resources could be shared, such as mobile libraries.

In Zheng’s eyes, the Chinese public’s awareness of environmental protection still needs to be improved despite the rapid economic development in recent years. She returned to Shanghai and devoted herself to education after receiving a PhD in chemistry from the Massachusetts Institute of Technology in the US in 2014.

According to Zheng, the ideas and awareness of the next generation will determine the future, so the children must know how to protect the environment and save energy. To this end, parents should act as an example, and more importantly, children must get close to nature to obtain a deep understanding and love toward the world and life.

Zou Yi shows his photos of the Beijing sky taken in 2014. (Photo by zhhjw.org)

In April 2016, an environmental activity was carried out in a community in Xinyu, Jiangxi province. Residents could exchange for plants with any two types of waste batteries. The activity aimed to call upon residents to start from subtle things and pay attention to environmental protection, advocating a green life style.  (Photo by People’s Daily)