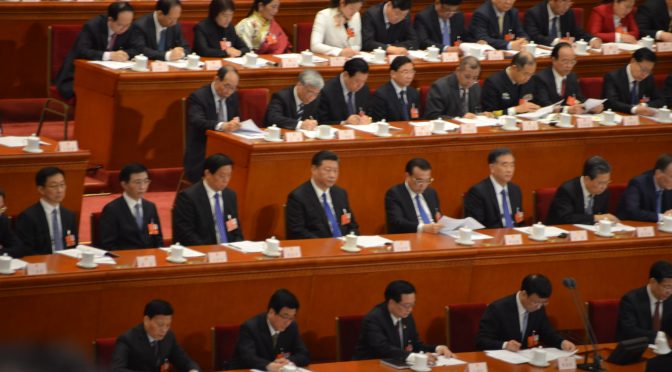 On March 13th, I got up early because on March 12 I stayed at home and watched Live TV broadcast to cover the National People’s Congress press conferences.  Due to the jetleg, I have to sleep early every day and get up very early.  This is good for me.

Smog, when will you go away?

In the morning, I looked outside through the window and found the smog was more serious than the previous days. But still, it was better than that of five years ago when I was in Beijing on 2013.

I took the bus No 10 outside the courtyard and it took me 20 minutes to arrive at Guomao.  After I got off the bus, I have to walk another 100 meters and then went into the subway.  Still I love it because it saved me a lot more walking.

When I came out of the subway, I saw the trees along the Chang’An Avenue  very beautiful. It looked like an ink painting.  It was foggy and smoggy.

I hurried to the Great Hall of the People. The guards were strict but nice.  Quickly I arrived in the Hall and went through the security. The logistics were good. They provided a safety box and a key so that people could put their extra mobile phone in the box and locked it. 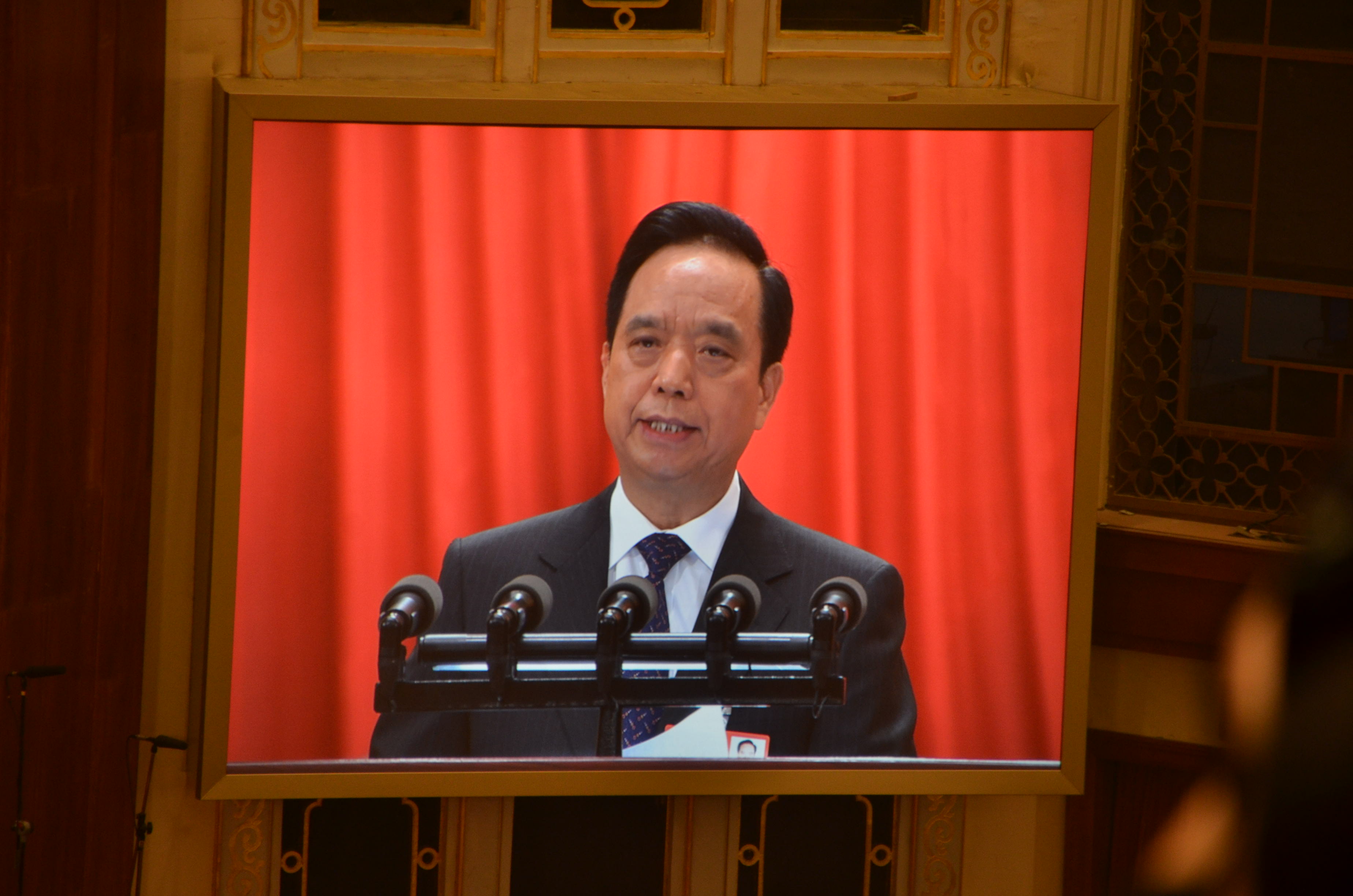 In the morning, it was Li Jianguo from NPC committee who presented explaination on China’s Supervision Law. This law shows the determination of the Communist Party of China to prevent corruption according to law.

Many Chinese delegations have visited Sweden and got to know how Sweden prevents corruption.

Emphasis was also given to supervision and both a Supervision Law and a Supervision department has been established. These are also the spotlights during this congress. It showed that Xi Jinping is determined to  prevent corruption according to law.

Chinese President Xi Jinping and Premier Li Keqiang attended the conference.  Li Jianguo presented a report on details of the Supervision law to illustrate why China forms supervision law and how it works to prevent  corruption. 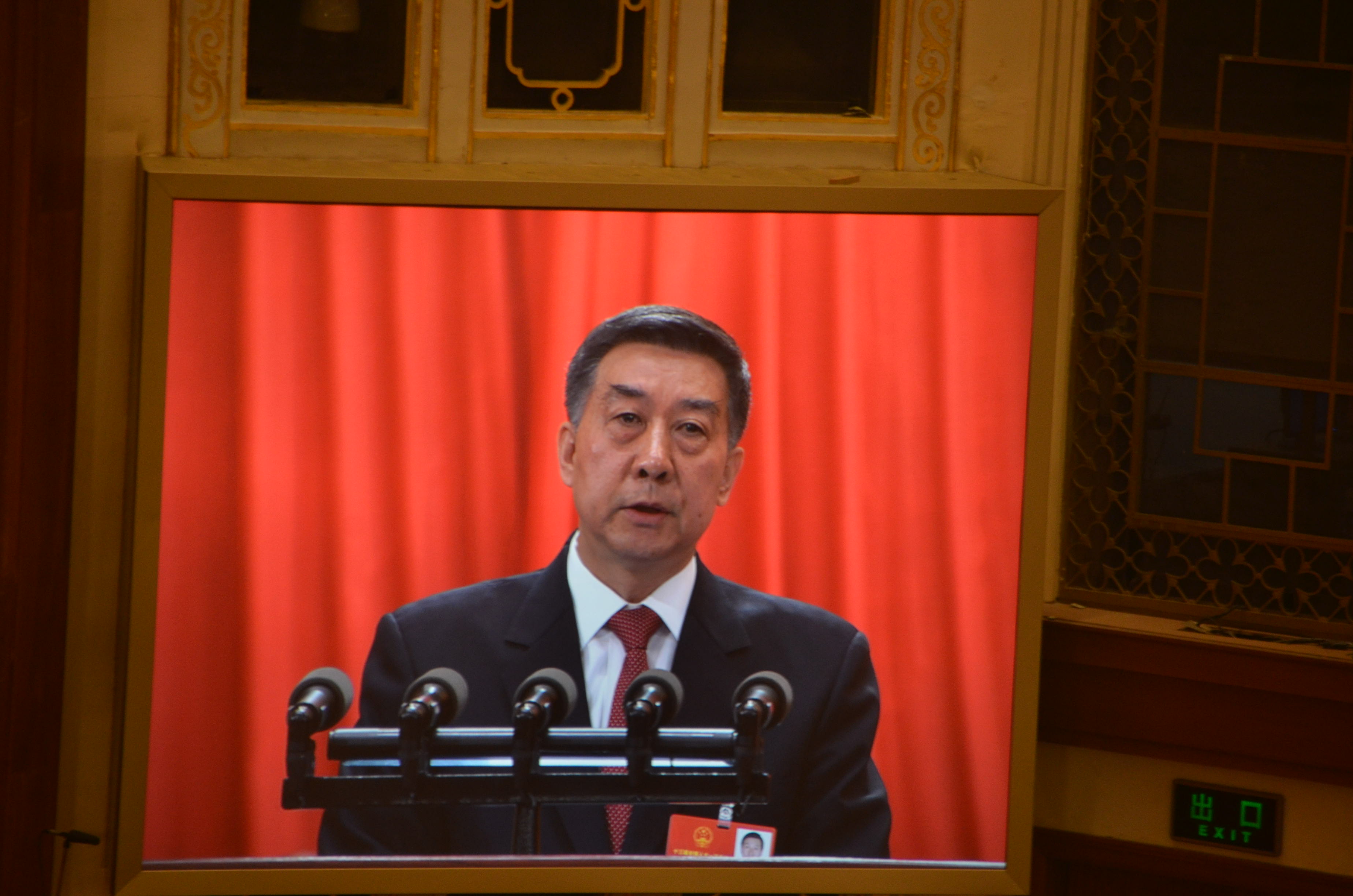 After this report, Wang Yong delivered a report on State Council’s institutional reform.

For years, people feel it is difficult to get rid of the family planning committee. But now it is gone.  In stead, with the call from the soldiers, a new department on retired soldiers has been established to take care of their pension.

Overall,  the State Council has cutt off 8 ministries, but also promoted some other ministries.  Foreign Affairs Ministry remains at the same level.

Tourism and Cultural Ministry merged into one and it was welcomed.

Delegates think the reform of the institutions  is quite reasonable.

After that, I went to Fulihua  at Nan Lishilu area. I used to work in those area and I miss it very much.

So I went to the Molly shop where I used to buy clothes.  I bought four clothes.  I took a bowl of noodles for lunch.

And then I hurried to Great Hall of the People.  The reason for it is that there is an open press conference in the Xinjiang Ugyor Autonomous Region delegation.  Kurban,  a Ugyor who used to ride a donkey to come to Beijing to see  late Chairman Mao. Now his great grand daughter becomes the delegate representing the hometown people.

She said she worked in the Liaoning Submarine before she became the delegate.  With her family’s experience,  she saw the great changes in their life for better  in Xinjiang.

She said in particular, President Xi Jinping put up forward a policy that the Chinese cadres should help the Ugyor families to form a partnership.  This way leads to the Ugyor family to eradicate poverty quickly.  The Ugyors feel honored to have a Han cadre to be their contact. 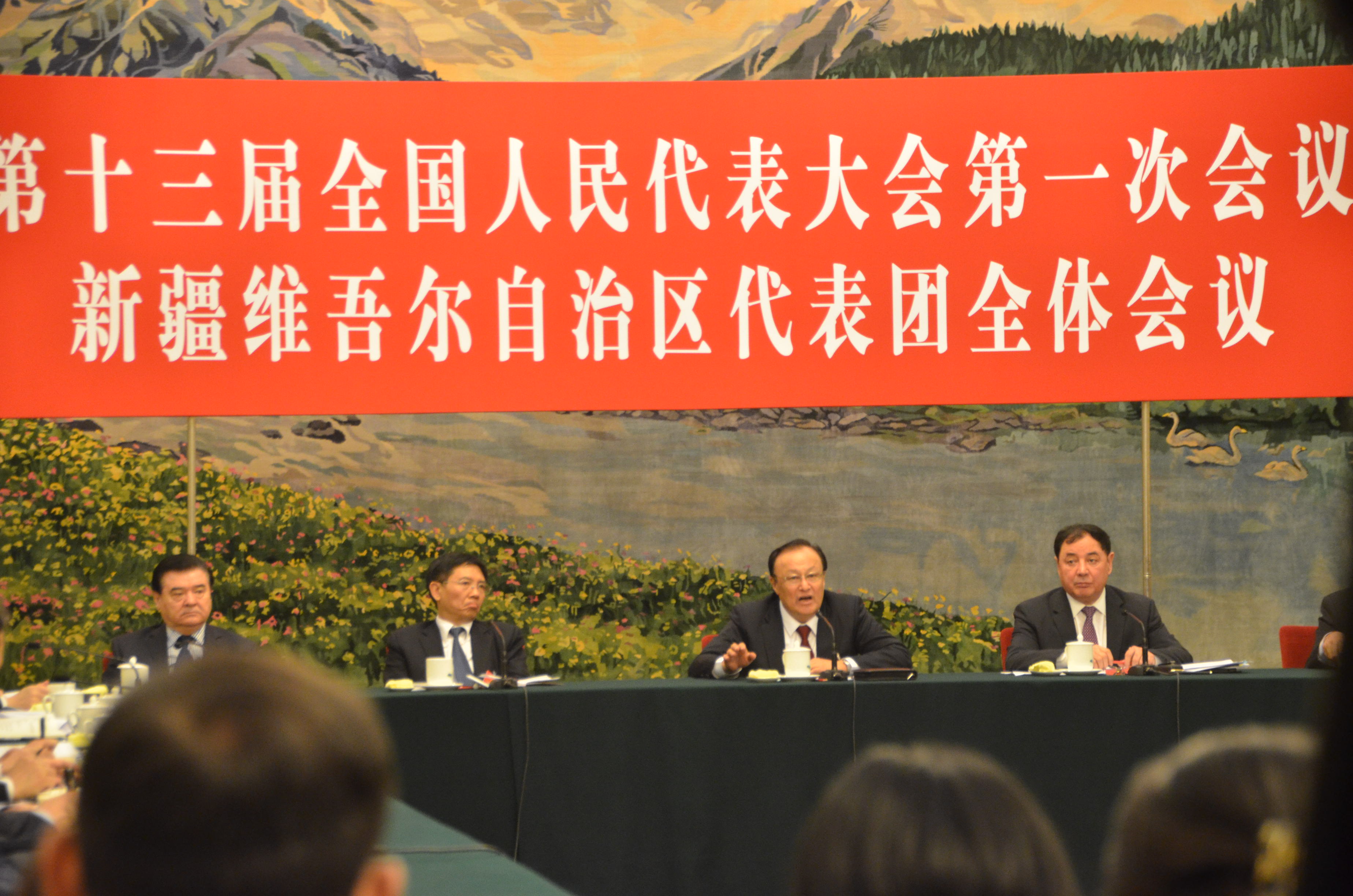 She said she would follow her great grand father’s step and continue to work hard to improve the local people’s living standards.

Unity among different ethnic groups in Xinjiang is an important task to keep the region safe, stable and prosperous. 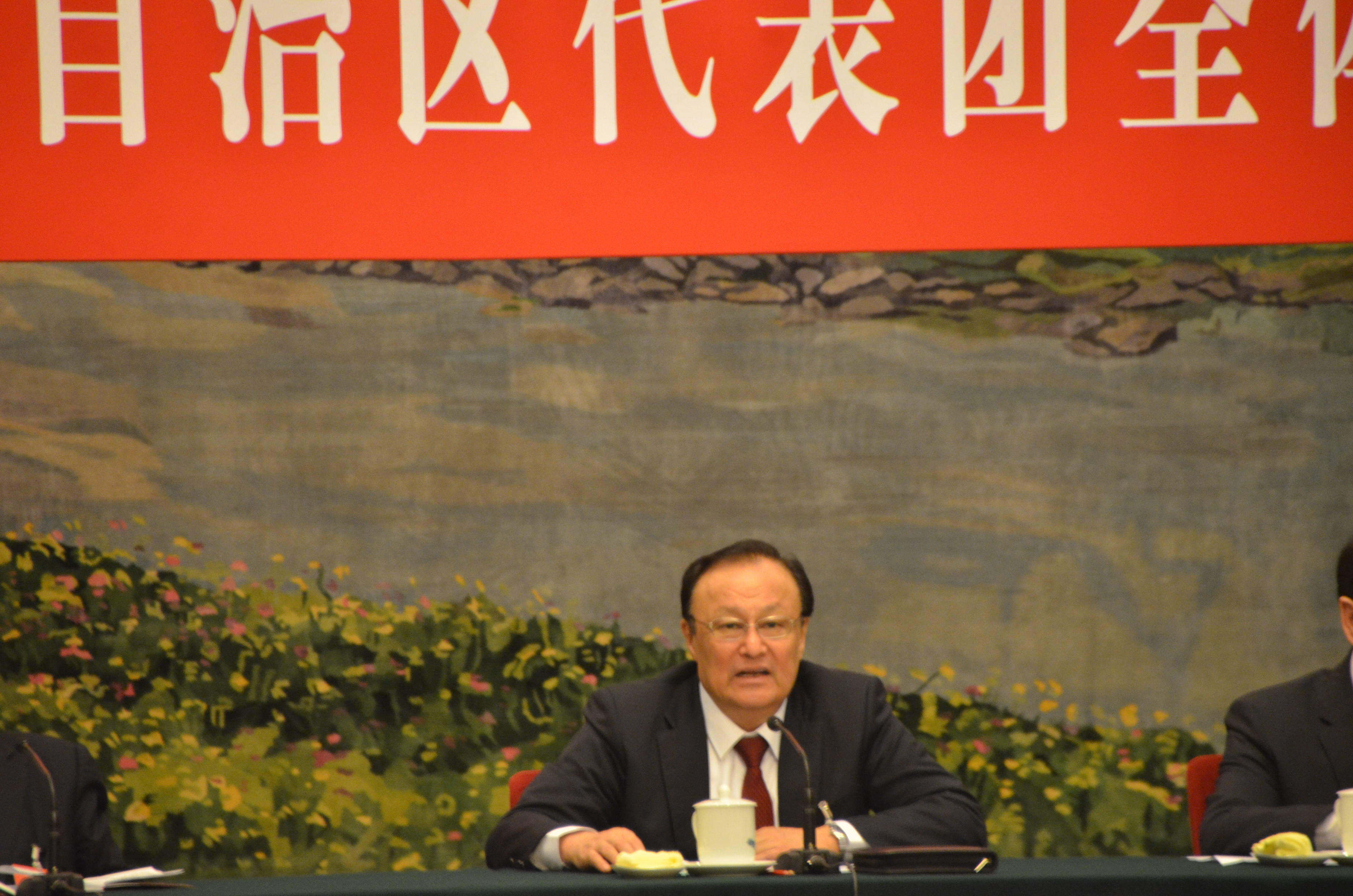 Tourism is an important industry in the region and also key for poverty eradication.

Xinjiang is a beautiful place.  It also receives support from Zhejiang Province as another kind of partnership.  That means the Chinese government asks the eastern provinces to help western provinces and regions.  This is also a good way to narrow down the gap between eastern and western regions.

After this press conference, I went back to the shop to fetch my clothes because I couldn’t take a lot of things to the Great Hall of the People.

It is true that it goes quickly and I can get off directly in front of Beijing Radio.  Then we went to a Yunnan style restaurant to eat a hotpot sour fish, but not as sour as herring in Sweden.

One can put noddles into the pot and with some vegetables, it became a good meal.  We talked a lot about why I left Beijing for Sweden and what I did over the years.

They said your zigzagging life sounds very interesting and you should write a book about it.  I said I have written a big part of it but I never know how to end it. So it is going on but no end.

Then they drove me home which sits outside the third ringroad.  I was moved by their hospitality and felt very glad that almost every family nowadays has one or two cars in Beijing.

Beijing was shrounded with smog and the trees look like an ink painting.

When I came in to the apartment, I felt I was so excited that I couldn’t sleep.  I watched wechat news and then tried to sleep again. But it was one thirty already.