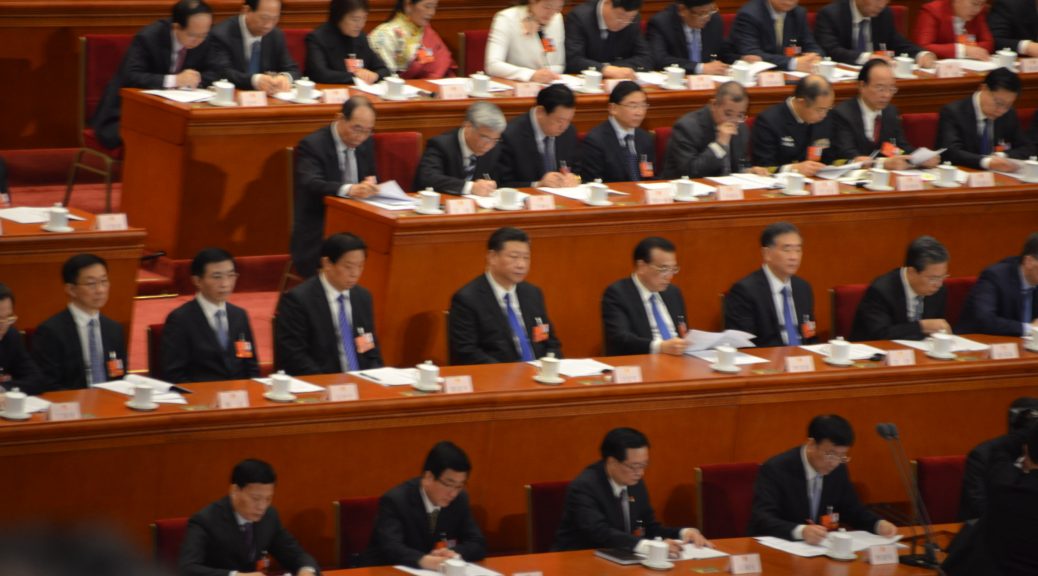 Beijing, March 15(Greenpost)– The smog was like a spirit to follow the NPC congress and CPPCC sessions over the past ten days except March 5.

But today when the CPPCC ends, the smog has finally gone with the wind.

When I arrived in front of the Great Hall of the People, the committee members just arrived.  They are mostly professionals from all walks of life such as doctors, teachers, lawyers, business people and sports stars.

I happened to see a tall man or maybe the tallest man in the world, Yao Ming.  When I visited Houston in 2002,  a black woman there said she liked to marry Yao Ming.

Yao Ming is really outstanding and about half a meter taller than others.

I also saw the film star Kai Li.  She is still very pretty.  For the first time I also locked a moble phone in the box because I happened to take two mobile phones.

The session smoothly passed the revision draft of the CPPCC Charter. Then it comes to the election process.  I experienced once the CNN journalist laughed at the Chinese election because they don’t think it is election. But I think since it is a real vote without signing your name, it should be considered as an election.  Everything is quite formal.

Finally Wang Yang was formally elected as the new Chairman of the CPPCC.  Yu Zhengsheng, also attended the ceremony and congratulated Wang with a broad handshake.

This shows that China can successfully and peacefully transfer their power without conflict.

I  felt very sleepy  and I was not sure I was tired or sick.  But when I arrived at apartment, I felt it was because I was tired.

Smog has gone with the wind to the Pacific Ocean

This morning the CPPCC held its closing ceremony and finally  CPPCC members approved its work report, Charter and other documents.  The CPPCC new chairman Wang Yang also made a key not speech.

He said CPPCC is not a decision making authority, but it can give good suggestions.  He vowed to make all efforts to support the Communist Party of China and the Chinese government to succeed in combating the three campaigns. That is to prevent serious risks, to get rid of poverty and to improve the environment to have a beautiful China.

When the sesson ends and when I came out of the Great Hall of the People, I saw a blue sky and white cloud.  Beijing is very beautiful again.  When I came back to the press center, I saw the news that it snowed in Shenyang too.

China is getting more and more beautiful and better and better in many aspects.