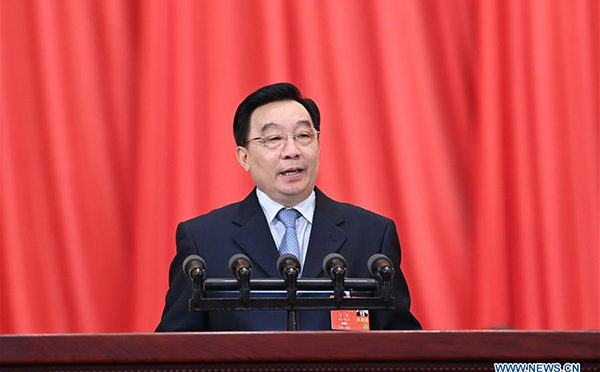 BEIJING, May 22 (Xinhua) — Chinese lawmakers started deliberating a draft civil code at the annual session of the national legislature, which opened on Friday.

Wang Chen, vice chairman of the Standing Committee of the National People’s Congress (NPC), delivered explanatory remarks on the draft civil code to deputies attending the third session of the 13th NPC.

In addition to general provisions and supplementary provisions, the 1,260-article draft has six parts on property, contracts, personality rights, marriage and family, inheritance and tort liabilities.

The compilation of the civil code is an important component of the plans of the Communist Party of China Central Committee with Comrade Xi Jinping at the core for developing the rule of law, Wang said.

It will further refine China’s basic legal system and rules of conduct in the civil and commercial fields, he added.

Once adopted, it will be the first law code of the People’s Republic of China and a milestone for China’s codification, according to Wang.

The civil code is expected to provide legal guarantees in the form of a complete civil legal system for China to achieve the two centenary goals and realize the Chinese Dream of national rejuvenation.

The decision to compile the civil code was announced in October 2014 at a plenary session of the Communist Party of China Central Committee. The legislative process started in June 2016.

The General Provisions of the Civil Law was adopted in 2017. Starting in August 2018, six draft parts were reviewed in different NPC Standing Committee sessions. In December 2019, a complete draft civil code was unveiled.

The NPC Standing Committee decided in its December session that the draft civil code would be presented to the NPC annual session in 2020 for deliberation.