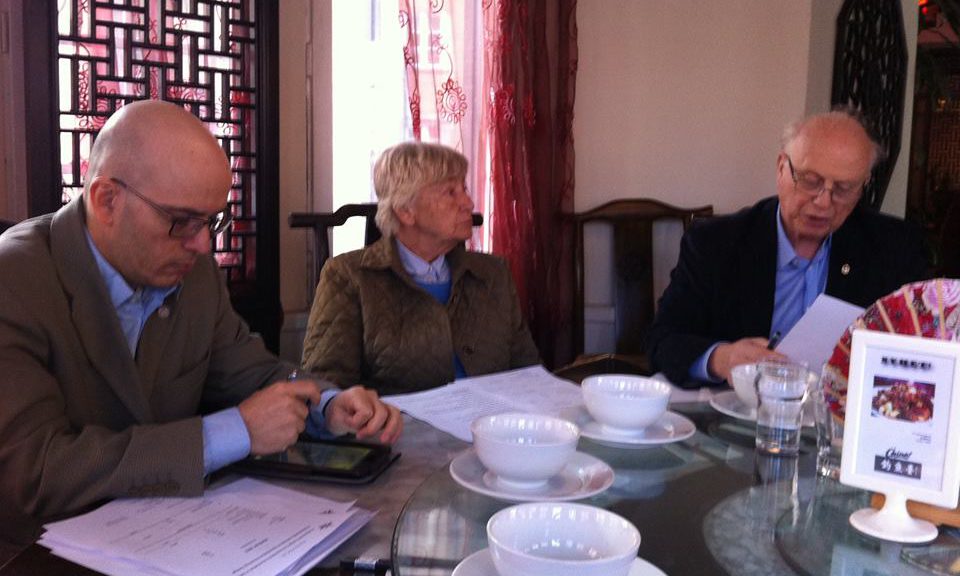 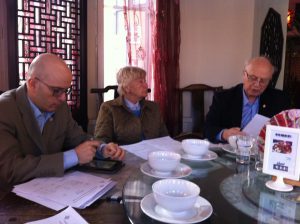 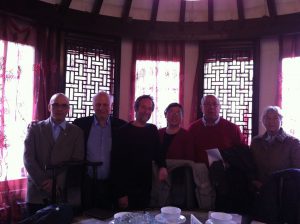 Swedish climate expert Dr. Fred Goldberg has said that carbon dioxide is not the main cause of the global warming. The climate change is not affected by human action, but mainly by the solar activities and ocean currents such as PDO (Pacific Decadal oscillations). He even predicts that the earth is going to experience colder winters in the following years or even decades.

Goldberg stressed that man should separate the concept of climate change from environmental issues. He holds that climate change is natural and caused by the sun activity, but the urban heat island effect and environmental problems are mainly caused by human activities and behavior. In an exclusive interview with People’s Daily Online, Goldberg explained his ideas.

History of climate on earth

“We could have an ice age any time,” Dr. Goldberg says, “Over the past one million years, we have experienced eight ice ages. Eighty percent of the last million years was ice age. We are lucky to live in this short inter-glacial period.”

“If we go down to the last 4000 to 3500 years in the Bronze Age period, it was three degrees warmer than today on the northern hemisphere at least,” Goldberg explained.

Goldberg said there is a nearly 1000 year cycle in climate change but there is a downward trend indicating that we are going towards a new ice age within 4000 years.

During the Viking era or the medieval Warm Period it was warm enough to grow grapes and cereal in England, he said.

“We had a new peak in high temperature in 2002 after a solar activity maximum, now the temperature is going down again. So we are heading into a cooling period.”

During the depression period 1929-1933, the production of CO2 went down by 30 percent. But due to the increase of the global temperature, the CO2 increased in the atmosphere because of the heating of the oceans thereby emitting CO2.

In 1991, there was an eruption of the Pinatubo volcano, one saw the reduction of CO2 because the volcano ash blocked the sun causing a cooling of the oceans. Goldberg said this is an indication that it was the solar activity that decides the amount of CO2 in the atmosphere.

Can we trust the measurement of the global temperature?

Dr. Goldberg said that there is an urban effect around heavily populated cities in our world, for example, the gap in temperature between the suburban Stockholm and the city center can often be at least 2 degrees Celsius. And the gap between Beijing city center and Great Wall area can be six degrees Celsius. The urban effect is caused by human’s construction, transportation and the density of the housing and population, but this is not a global effect.

“You cannot compensate for urban effects because you don’t know how much it is, it changes with cloudiness, time of day, sun position over the horizon, wind intensity and direction and winter or summer,” Goldberg said.

He questioned the accuracy of the measurement in Al Gore’s The Inconvenient Truth. He said that in the USA about 900 stations accounting to 78 percent of the total are incorrectly located such as in the parking place or airports near the airplanes or runways where he believes it is definitely hotter than other natural areas such as mountains or rivers.
About 90 percent of the places where they measured the temperature are not according to regulations and have an error of 1 to 5 degrees C, which he thinks is very big. The only accurate way to measure temperature is with satellite, Goldberg said.

Another thing that matters is that climate scientist must do what they say they do,” Goldberg argued.

Phil Jones in Hadley Centre said he wouldn’t give out the data about his 25 years of work to someone who only wants to find something wrong with it thereby violating the Freedom of Information Act, Goldberg held.

How much carbon-dioxide in the atmosphere?

How much CO2 is there in the air? Only 0.0387 %, it has neither odor, nor color and is not poisonous. If there isn’t CO2, there will not be plant life, therefore, we must have CO2, we need it, Goldberg argued.

He said that the average amount of water vapor is 30.000 ppm. So the consequence of that is that 95 percent or even up to 98 percent of the total greenhouse effect is water vapor while only one percent is CO2. The other greenhouse gases are ozone, methane and CFC, etc.

Goldberg said even if human beings emit 100 ppm CO2, 98 percent of it will go into the ocean because of the chemical balance between the oceans and the atmosphere. The remaining 2 ppm will be added to the atmosphere which is negligible because there isn’t enough oil and gas in the world to generate enough carbon dioxide to change the climate.

Over the past 100 years, with an increase of 100 ppm CO2, the earth temperature only increased 0.7 degree. Thus it is not possible for the temperature to increase 2 degrees globally which our politicians want to prevent, Goldberg said.

Why? Goldberg explained that the ocean will absorb large amount of CO2. Once it is absorbed by the ocean, it will to some extent become calcium carbonate which is the same thing as limestone. Then the limestone will be building up at the bottom of the oceans. The whole island of Gotland which is the largest island in Sweden is formed of limestone.

“It was built up at the bottom of the ocean because the ocean absorbed the CO2 and when saturated it formed limestone sediments at the bottom of the ocean. The CO2 content in the atmosphere has been shrinking continuously. A billion years ago, there was 80 percent CO2 in the atmosphere, now it is 0.038 %. It ‘s been shrinking all the time, it is continuing because of the formations of limestone sediments in the oceans.” Goldberg explained.
He said that the transport of CO2 is controlled by ocean temperature. For example, one can send CO2 bubbles into a bottle of cold water which is about 5 degrees C, but if one opens the bottle and puts it on the table, the water temperature will increase, and the CO2 will leave the water soon.

The same theory, the lakes absorb a lot of CO2 in winter and it releases the CO2 in summer when the temperature reaches 23 to 25 degrees, you won’t have much CO2 in the water. Thus this is a natural process and with all the minerals in sea water, the sea water can absorbs 73 times more CO2 than fresh water.

“Mount Mauna Loa in Hawaii is the world’s largest live volcano which emits a lot of CO2. 87 percent of the data recorded there has to be edited. The data may therefore have been manipulated,” Goldberg said.
He said that in 1973 there was a big eruption and there were no measurements done for 3 months, but there is no data gap in the diagrams. Why? Asked Goldberg.

Solar activity decides whether the temperature is up or down

Goldberg said that solar activity has increased 3 times according to records from NASA earth observatory. This is something we can’t do anything about.

“The activity of the sun shows the highest activity ever recorded in 2002. Earlier history of solar activity can be seen from the distribution of isotopes in rocks and biomass which are depending on the solar activity,” Goldberg explained.

Sun activity heats the sea surface, and the sea releases CO2. Over the past 100 years, 100 ppm CO2 were emitted due to the warming of the sea surface.

Along the equator, the sun is heating the water. When the water is warmer, the water is releasing carbon dioxide (CO2). The colder the water is, the more CO2 it absorbs. And therefore the colder waters around the Arctic and Antarctica will absorb a lot of CO2. There is a huge cycle of CO2. If you take out the CO2 for plants, then the ocean will evaporate more to air. If you emit more, the ocean will take it up. Ocean controls the amount of CO2 in the atmosphere. The sun controls the ocean temperatures which in turn has a strong effect on the climate on earth.

“The people of Bangladesh breaths out 75 million tons CO2 per year, Sweden generates 60 million tons per year from all its industrial activities, transports and warming of houses etc. while the people in China breathes out 700-800 million tons per year. What does it mean? It means to reduce the amount of the CO2 will have no effect on our climate at all. You cannot do anything, I mean you cannot stop the sun from coming up tomorrow morning. If we cannot stop the sun from going up in the morning, can we change the CO2 system in the atmosphere? It is self regulated and sun-controlled,” Goldberg said.

So far no one can give a good explanation on why we have El Nino or other stormy weather. But Goldberg has his explanation.
“The sun is heating the ocean surface and water is evaporating off. When the water evaporates from the ocean, the salinity in the surface water increases. Then the water gets heavier. So the warm water get heavier and sinks, and then the less heavy water flows up to the surface. It exposes to the sun, and the same process continues. There is a salty warm water going down, and it drifts off with the current under the surface for some time. Then suddenly the current hits another current and pushes the water up, then comes up to the surface and releases the heat it collected. It happened on the east and west side of the Pacific Ocean depending on the pattern of the current,” Goldberg said.

Why does the arctic ice melt?

It is the same theory with the ancient trade current or trade wind, when you travel from Europe to China, you have to wait for the winds to go in that direction and when you arrived in China, you have to wait another six months until the wind change direction so that you could sail back again.
Goldberg said in 1977, there was a great climate shift in the Pacific Ocean, the temperature in Alaska increased by 3 degree C in one year. In 2008, it decreased 3 degrees back to normal which means the warm water is not going to the Arctic Ocean any more.

“So when you hear the ice in Arctic Ocean is disappearing, it was because of this warm current flowing to the Arctic. Now it has stopped. So the ice is building up again. Very few seems to have understood this. They think it is the global warming that has melted the ice, but in fact, it is the warm current that melted the ice,” Goldberg said.

Then also strong currents carried the ice out into the Atlantic where it melts.
Goldberg said whether the current is warm or cold depends on if the PDO is positive or negative. If it is positive, there is warm current entering the Arctic Ocean and if it is negative, the warm water stays in the western Pacific Ocean.

Goldberg already predicted in the summer of 2009 that the 2010 winter will be a very cold one because the solar activity was zero according to data in NASA in the US and Kiruna in Northern Sweden.

“If we look at the history, we see almost three years without sun spot. Thus, I think it will be cold. Last time with a similar situation was between 1810 and 1812. That also coincided with the time when Napoleon invaded Moscow,” said Goldberg.

“I think China should prepare for future cold weather because as a consequence the food production will go down.” Goldberg concluded.
Goldberg focuses on climate issues for over a dozen years with well grounded science knowledge. He used to teach in Sweden’s Royal Technology University.