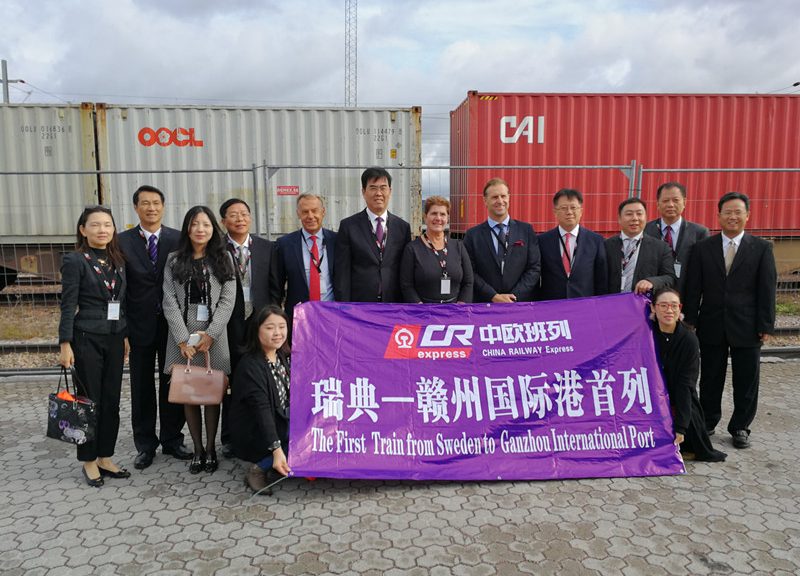 By Xuefei Chen Axelsson
STOCKHOLM, Sept. 21(Greenpost)– On Sept. 17,  a China-Europe Freight Train went from Bergkvist-Insjön Station in Dalana, Sweden  to Ganzhou, Jiangxi Province East China with a total of 900 tons of  timber.
The total travelling distance reaches 14 thousand kilometers and it will take 19 days to arrive in Ganzhou Port.

Li Bingjun said China-Europe Freight Train is the typical result of the world’s response to Belt and Road Initiative put up forward by Chinese President Xi Jinping, it has been dubbed as the Iron and Steel Caravan.  Ganzhou Port is the 8th of its kind opening to the outside world and the first experimental zone of Quarantine supervision. It has become an important destination of transportation of Belt and Road Initiative.  China has opened 18 railway lines and reached five central Asian countries and European economic zones. He hopes that the operation of the train symbolizes the opening of a new chapter in Sino-Swedish and Ganzhou and Sweden friendly cooperation.

Governor Törn said Sweden enjoys 73 percent of the forest coverage rate with forests industry export accounting for 11 percenet of the total export volume. The annual export turnover reaches 12.7 billion Euro. The export to Asia increased rapidly in recent years. He hopes the operation of the train can lead to further increase of Dalana’s export to China.

Counselor Han Xiaodong said Sino-Swedish economic and trade cooperation has a long history. Sweden, as the head of the European wood industry is the third largest wood export country in the world. Its annual export volume of wood can reach 13 million cubic meters.

Ganzhou is the largest wood furniture manufacturing base with an annual consumption of 15 million cubic meters of wood. There is great prospect for bilateral cooperation. He hopes the train will go to China regularly in order to push bilateral economic and trade cooperation into a new era and achieve new achievements.