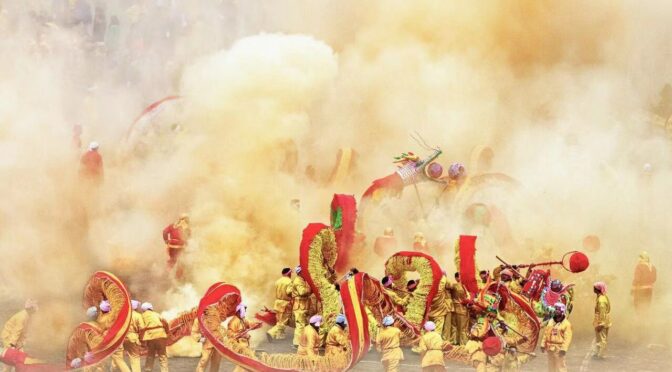 事实上，人类拥有共通的认同感。音乐，便是一种跨越国界超越语言的交流媒介。它以全人类共有的表达形式，打破一切藩篱，架起交流的桥梁。When different cultures meet, it may be easy to believe that linguistic and cultural barriers make understanding difficult, but there is often a core of recognition. Music is a universal type of communication medium that transcends language barriers and national boundaries, bridging exchanges among peoples.

早在远古时期，中华民族勤劳智慧的先民们在劳动生活中创造的民间歌曲便是中国民族音乐的精华。中国第一部诗歌总集《诗经》以歌唱形式广泛深刻地反映了周朝的社会状况。汉代的“乐府”在记录和推广民歌方面发挥了重要作用。唐朝通过对外文化交流，广泛吸收其周边民族音乐，并保持着中国民歌旺盛的生命力。宋至明、清以来，在原有民歌体裁继续传播的基础上，随着城镇商业经济日益繁盛，号子、田歌、山歌、信天游、花儿等民间小调体裁也广泛流传。
Since ancient times, folk songs created by the diligent and intelligent Chinese ancestors in their work and lives have been an essential part of Chinese folk music. The Book of Songs, the first collection of poems and verses in China, profoundly and extensively reflected the history and civil society of the Zhou dynasty in the form of singing. Yuefu (Chinese poems composed in a folk song style) of the Han dynasty played an important role in recording and promoting folk songs. As international cultural exchanges thrived in the Tang dynasty, Chinese folk songs embraced folk music of neighbouring nations while maintaining its own vigorous vitality. From the Song dynasty to Ming and Qing dynasties, a variety of new folk music styles were also widely spread with the growing prosperity of urban commercial economy, such as Haozi (work song), Tian’ge (field song), Shan’ge (mountain song), Xintianyou (popular on the Loess Plateau), Hua’er (popular in Northwest China), etc.

中国民歌按音乐体裁可分为以下九类：号子，在劳动中产生并演唱，铿锵有力的音乐节奏与劳动节奏紧密相连；山歌，在山间旷野或高原草原中演唱，节奏自由、音域宽广、曲调高亢；田歌，长江中下游流域在水田劳作时唱的一种古老的民间歌曲；小调，广泛流传于城镇乡村中，曲式结构规整，曲调细腻婉转，因职业艺人与文人墨客的参与，其填词度曲更为考究，有些曲调已形成曲牌，并产生许多变体；舞歌，且歌且舞的民间歌曲，曲调律动感、节奏感较强，大多在民间喜庆、节日集会时演唱；渔歌，反映渔民生活的歌，其音乐风格优雅平稳，结构短小，主要流传在沿海、沿江河的部分地区；礼俗歌，在相沿积久的特定风俗活动中传唱，并直接反映该风俗活动的基本内容和特征；儿歌，反映儿童生活情趣，传播生活、生产知识、具有民歌风味的简短诗歌，词句音韵流畅，节奏轻快；生活音调，反映日常生活中最真实的风土人情，尤以表现农民和妇女生活为多的歌曲。由于中国各少数民族在地理、历史、人文、语言等方面的不同，情歌、叙事歌、宗教歌等也具有十分重要的地位。
Chinese folk songs can be divided into the following nine categories according to musical genres: Haozi, originated and sung by laboring people during their work, the music rhythm of which is closely linked with that of labor; Shan’ge, sung in the mountains, on the plateaus or grasslands with free rhythm, wide vocal range and high pitch; Tian’ge, an ancient type of folk song sung by farmers in the middle and lower reaches of the Yangtze River when they are busy farming in paddy fields; Xiaodiao (ditty), widely spread in towns and villages with relatively fixed lyrics, regular musical form and graceful melody – due to the participation of professional artists and literati, their lyrics and composition are more exquisite, leading to the emergence of some Qupai (labeled melody) and variations; Wuge (dance song), folk music with dynamic and rhythmic melodies for singing and dancing, mostly in folk festivals and celebrations; Yuge (fisherman’s song), depicting fishermen’s life in regions along the coasts and rivers featuring elegant style and short structure; Lisuge (ceremonial song), sung in traditional and folk activities revealing the content and characteristics of the customs; Er’ge (children’s song), catchy and delightful short folk verses that reflect children’s joyful life and spread knowledge of life and society; life tone, depicting the most real daily life and customs, especially that of farmers and women. Due to differences in geography, history, culture and language among Chinese ethnic minority groups, love songs, narrative songs and religious songs are also important parts of their music.

Scandinavian folk music springs from an improvisational culture where the music is based on having an ear for music and oral tradition where the music is passed on and taught by listening and rarely written down, which is similar to Chinese folk music. It is played with great variations and adaptations to the practitioner’s own style and the author of individual tunes can be difficult to trace, despite terms such as “polska after Hjort Anders…”.

In the northern part of Scandinavia, traditional music often has a melancholy undertone – perhaps formed by the vast wild nature and wide forests where there were long distances between the villages. In Southern areas with richer soil and friendlier landscape, the music is often more delightful and light-hearted – an imaginable reflection of the surrounding nature. An example is the heartbreaking ”Song for Father”. One of the many branches of Swedish folk music is folkloric corals (folkliga koraler) which is old religious psalms sung in a folk tune, the melodies are often rich of drills and sinuous like embroidery and continues to inspire many musicians today. Also ballades is very common; songs of many verses that were sung and danced in ring telling a longer story. This was a custom not only in Sweden but in whole Scandinavia, also Iceland and Faroe Islands. Sometimes and especially on the Faroe Islands they were sung and danced like an invocation and as an eventual preparation so the evilness would not happen. Other branches include dances, sheperds´ music such as vallåtar and fäbodpsalmer, shorter songs (visor) and much more.

Khoomei is a form of singing that originated in western Mongolia, in the Altai mountains. The performer imitates sounds of nature, simultaneously emitting two distinct vocal sounds: the drone is produced with very taut vocal cords, and the melody is created by modulating the size and shape of the mouth cavity, opening and closing the lips and moving the tongue. The singer simultaneously produces a continuous drone and a clear high pitch, creating a harmonious concord with different voice parts by one person. Khoomei literally means pharynx, and it is believed to have been learned from birds, whose spirits are central to shamanic practices. Khoomei is performed by Mongolian nomads in a variety of social occasions, from grand state ceremonies to festive household events. Khoomei is also sung during herding, and inside the yurt to lull babies to sleep.

A very special song technique in Scandinavia is called ”kulning” and is used in the northern parts of Sweden to call for the cattle and sheep in the mountains and meadows, mostly by female shepherds. It´s a song that can be heard several kilometers away and each shepherdess had her own song so that her herd would recognize the tune and come. It was also used as communication between homesteads. The song has a high-pitched vocal technique, i.e. a loud call using head tones, so that it can be heard or be used to communicate over long distances. It has a fascinating and haunting tone, often conveying a feeling of sadness, in large part because it often includes typical half-tones and quarter-tones (also known as “blue tones”) found in the music of the region. Also instruments like different kinds of horns were used. This way of singing is still taught and is a significant part of the folk music of today. The blue tones or in-between tones are difficult to learn, though when performed it touches one’s heart and mind in a very special way that adds layers to the blue feeling. A modern master of these tunes is Lena Willemark, a singer from Älvdalen in Northern Sweden, who often plays with Ale Möller and sings in her own dialect, which is more like a language of its own.

There are a great variety of musical instruments in Sweden amongst which the violin is by far the most important, while several kinds of flutes, horns and modern instruments such as guitar, harmonium etc. are also commonly used. A sister instrument to the violin is nyckelharpa, a keyed fiddle, and an older version is vevlira, which produces sound by a hand crank-turned wheel rubbing against the strings, much like a violin bow.

The 1900s marks a time of fusion of Eastern and Western culture, and consequently, a new chapter of Chinese music. In the current context, exchange and integration with foreign folk music continues to play a profoundly important role in various fields of Chinese music, including music creation, performance, education, theory, publication and marketing, etc., contributing to the development and prosperity of Chinese music in the new era.

During the early 1900s, many Swedish music scholars wanted to protect the folk heritage and performed extensive work on recording and writing down folk songs from the oral tradition. Choreographers were also inspired by folk dances and songs, and created music and dance for scenic use. The melodies are traditional songs but the way of playing may differ slightly from that to the folkloric dances.

Today’s expressions in folk music in Sweden take on many different shapes and are influenced by jazz, world music, pop and rock. Folk music in Sweden is experiencing an upswing with a big variety of groups, composers and educations in folk music at universities and folk high schools. Many folk music festivals and events are organized every year, including Falun Folk Music Festival, Urkult, Umefolk, Korrö Folk Music Festival etc. Also the popular and various folk dance scenes throughout the country attract people of all ages for dancing and listening.