I thought if we gave one minute of a national mourning for all those who died during this anti-covid-19 campaign including those victims. But the Chinese government has announced a three minute mourning.

According to BBC report, China has mourned the victims of the coronavirus outbreak by observing a three-minute silence, bringing the nation to a halt.

A day of remembrance was declared in China on Saturday to honour the more than 3,300 people who died of Covid-19.

At 10:00 local time (03:00 GMT), people stood still nationwide for three minutes in tribute to the dead.

Cars, trains and ships then sounded their horns, air raid sirens rang as flags were flown at half-mast.

The first cases of coronavirus were detected in the Chinese city of Wuhan in Hubei province late last year.

Since then, the virus has swept the globe, infecting more than one million people and killing nearly 60,000 in 181 countries.

In Wuhan, the epicentre of China’s outbreak, all traffic lights in urban areas were turned red at 10:00, ceasing traffic for three minutes.

China’s government said the event was a chance to pay respects to “martyrs”, a reference to the 14 medical workers who died battling the virus. It was reported that more than 3000 Chinese doctors and nurses as well as workers in hospitals were infected during the period. About 50 police and guards died due to the infection while on duty.

They include Li Wenliang, a doctor in Wuhan who died of Covid-19 after being talked by police not to talk about the disease.

“I feel a lot of sorrow about our colleagues and patients who died,” a Chinese nurse who treated coronavirus patients told AFP news agency. “I hope they can rest well in heaven.”

Saturday’s commemorations coincide with the annual Qingming festival, when millions of Chinese families pay respects to their ancestors.

China first informed the World Health Organization (WHO) about cases of pneumonia with unknown causes on 31 December last year.

By 18 January, the confirmed number of cases had risen to around 60 – but experts estimated the real figure was closer to 1,700.

Just two days later, as millions of people prepared to travel for the lunar new year, the number of cases more than tripled to more than 200 and the virus was detected in Beijing, Shanghai and Shenzhen.

From that point, the virus began to spread rapidly in Asia and then Europe, eventually reaching every corner of the globe.

In the past few weeks, China has started to ease travel and social-distancing restrictions, believing it has brought the health emergency under control.

On Saturday, China reported 19 new confirmed cases of coronavirus, down from 31 a day earlier. China’s health commission said 18 of those cases involved travellers arriving from abroad.

As it battles to control cases coming from abroad, China temporarily banned all foreign visitors, even if they have visas or residence permits.

What is the latest worldwide?

As the coronavirus crisis in China abates, the rest of the world remains firmly in the grip of the disease.

In the US, now the global epicentre of the outbreak, the number of deaths from the disease jumped to 7,152 on Friday, according to data collated by Johns Hopkins University.

Meanwhile, deaths continue to climb in Italy and Spain, the second and third worst-affected countries in the world.

However, there was a glimmer of hope for both countries, as the downward trend in the rate of new cases continued.

Thanks to BBC’s objective report today.

On Page 14 of Swedish Daily DN’s World page, there was a documentary called China and the Game around the Czeck’s masks. A Green Post reader also mentioned that Swedish Radio talking about China’s donation of medical goods to the western world as a kind of game.

Someone called it diplomacy, I am not opposed it. But call it a game, it is with a kind of negative mentality in it. I think it is exactly this problem that we need to learn from each other about how we thought and why we did what we had done.

Suppose China weren’t attacked by cover-19 and had a lot of medical goods and they donated the suffering Europe, then you could suspect if China was sincere or selfless because they didn’t suffer anything.

But now the fact is that China had suffered from this virus themselves severely. But they worked so hard that they finally controlled the spreading of the virus. And with the breakout in Europe, many students flew back to China and about 45 new cases took place among the returned people from abroad. Most of them were Chinese.

We should feel good that China now can resume to work and produce more medical goods. While Wuhan was severely attacked by the virus, many other areas were much less attacked because of the isolation policy. Therefore resumption of production took place in most of northern areas and Guangdong province, Zhejiang province and Jiangsu province and Henan province.

While the big industrial cities such as Dalian produce masks production machines, many factories in the south produce masks.

There are many kinds of masks. One is common masks, ordinary people can use them for several times. The other kind is daily used or single use surgical masks. That is used for doctors in normal cases. And N95 or KN95 are used for treatment or taking care of covid-19 patients.

In China, they even tried the robot to send food to the patients in order to avoid contact. But in light symptom treatment place, the patients got a lot of extra care such as singing or dancing or playing Taiji or Baduanjin.

The report about buying and selling of masks is like this. At beginning, when China suddenly on Spring Festival issued such a call to need N95 masks or gloves and other protective material, it was like an order or a strong call in which overseas Chinese immediately collected money from their own purse and then bought the masks and tried all means to send them to China with various efforts to save lives.

It was quite understandable that they did that. And with such an effort China stopped spreading of virus. Now Europe needed the masks because we knew that a lot of them were bought by Chinese, so China either donate or sell back to European countries.

At beginning they also bought everything from here, so now they will sell back. Donation also happens so that people understand what kind of products they need and whether it will be accepted by people. With Swedish experts and media talking a lot about wearing mask useless, people didn’t have a desire to buy it and I heard the doctor said even they wanted to buy, they could not get it because the apotek ran out of masks.

As for the price, it is negotiable. The price went with the demand. The goods are some for donation and some for selling, everything should be under negotiation.

When needed, the government should allocate resources to protect the doctors and nurses. The market should also allow the apotek to import some ordinary masks so that those who need them can buy from the apotek.

To say it is a game, it is too much. Many Chinese felt Swedish acted slowly but cannot help thinking of helping. On the other hand, without your consent, it is difficult to act. With all the negative news, it is hard for Chinese to act. Should they really donate? or should they keep silent and do nothing? All the sharp words made people think whether they should take action or not.

Also about the mentioning of certain areas people, it will raise the issue of discrimination. Actually Qingtian people are good business people and they have been serving as a bridge between China and European countries.

China intended to help European countries especially which are friendly.

Meanwhile, recently there were also reports about the quality. I like to say that it showed another difference between Chinese and westerners. In China for some people they also tested three times. Only by three times negative, that would be negative. Some people could not be tested as positive, Chinese doctors thought their infection was not serious. While in the west, one said it was quality problem immediately. But the truth was that those people didn’t use them properly.

I think we should trust China because it didn’t make mistake by purpose. They always have good intentions. It was the west who always had such critics all the time against China. 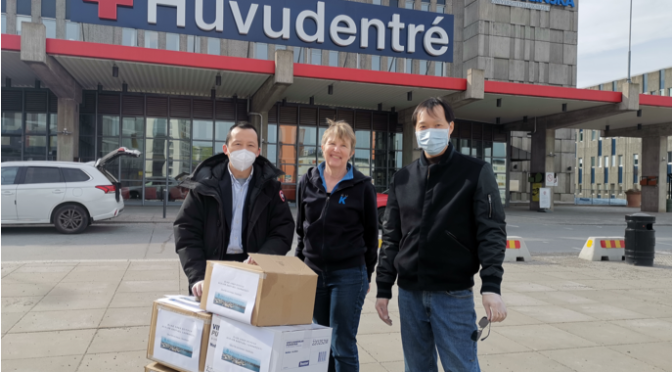 According to Wu Wangling, Vice Secretary of SKR, the donation campaign was launched by Executive Director of SKR Ye Peiqun and coordinated by Wang Meishuang on March 24th. Within hours, a total of over 30 thousand yuan or 40 thousand kronor were collected and a total of 1277 FFP 2 masks were bought.

Wu Wangling and Xu Li jointly sent these masks to the doctor in emergency in Karolinska Institutet Hospital.

“This was en emergency donation since Sweden also suffers from the covid-19. Sweden is our second home. We realised that there was shortage of protecting materials for doctors and nurses. To protect them is very important for the anti-virus campaign. That is also a way to protect ourselves. We hope this will be a bit useful for them and can help a little bit. ” said Wu.

The following is the Swedish version:

But there are still regions that have fewer case as one. Blekinge one, Gotland one, Halland one. Vasterbotten one. For these areas it is still hopeful to stop the cases to spread. Try to isolate, do not gather together. Stay at home.

Advice for the over-70s on protecting themselves from the coronavirus

The Government’s objective is to protect people over 70 years of age from risk of contracting coronavirus (COVID-19). Older people are clearly at a higher risk than young people of getting serious symptoms requiring hospital care.

As a general guideline, persons over 70 years of age are obliged to refrain from contact with other persons to the extent possible, i.e. in quarantine-like conditions.

The Government requests people over 70 to avoid close contact and movement outside their homes because it would increase the risk of infection. If it is essential to go in person to a shop, pharmacy or health station or to do other business, the advice is to do this at times when there are few other customers around. Please keep 1-meter distance from other people.

In general, situations should be avoided that would increase the risk of exposure. Effective hand hygiene is vital.

Everyone is urged to follow the guidance issued by the Finnish Institute for Health and Welfare (THL) to minimise the risk of infection.

Everyone should think about how their own actions and choices can help avoid spreading the coronavirus, and should make the necessary adjustments to prevent risks.

Everyone is asked to think about the risk of infection and to avoid doing things that might spread the coronavirus.

In particular, we should consider the position of older people and those who are vulnerable. A person’s resistance to the disease may be impaired due to, for example, underlying diseases such as diabetes or cardiovascular diseases.

Non-essential visits to anyone over 70 and in other risk groups should be avoided. They can be contacted by phone or Skype, for example.

If a visit is essential, handshakes, hugging and other close contact should be avoided unless essential for care or treatment reasons, in the case of staff, for instance. It is important that all visitors use a scarf or other protection for their nose and mouth.

People close to those over 70 and in risk groups are urged to consider the potential risk of infection via their other contacts.

Neighbours, family and friends are important supporters of everyday life in emergency conditions.