A memorial service has been held in Beijing for the first English announcer of the People’s Republic of China, Wei Lin, who passed away on Friday. 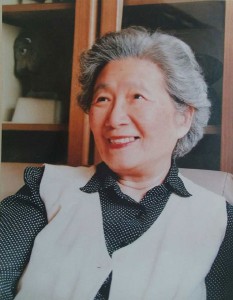 Wei Lin was the anchor of a 20-minute inaugural English news program on the war-time Shanbei Xinhua Radio run by the Communist Party of China in 1947.
That program went on air on September 11 that year.

The date has been designated as the birthday of the English Service of China Radio International.

Wei Lin was also the news anchor announcing the formation of the new Chinese government in 1949. 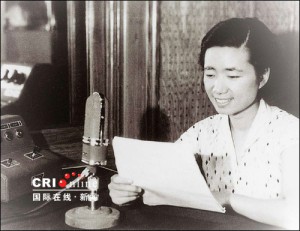 Wei Lin anchored a variety of shows including news and features at the English Service of CRI during her long career.

She retired in 1983 but continued to do part-time work as a volunteer.

Editor’s note: Wei Lin was like a super star in our heart. Although she retired in 1983, she was still showing up in many occasions in CRI. When I joined CRI in 1990, I was coached by her disciple Jin Meifen to be an announcer. I was coached by Zhang Qingnian and Chen Yuanneng too.

Wei Lin was a very loving person. When she was 70 years old, her voice still sounded very young and her articulation was the best in reading English news.

As the first anchor in CRI, she was such a devoted, dedicated and loyal person to the broadcasting cause. Her spirit and the spirit of her generation was very respectable. Without them, there wouldn’t have been China.

May her live in our heart forever!