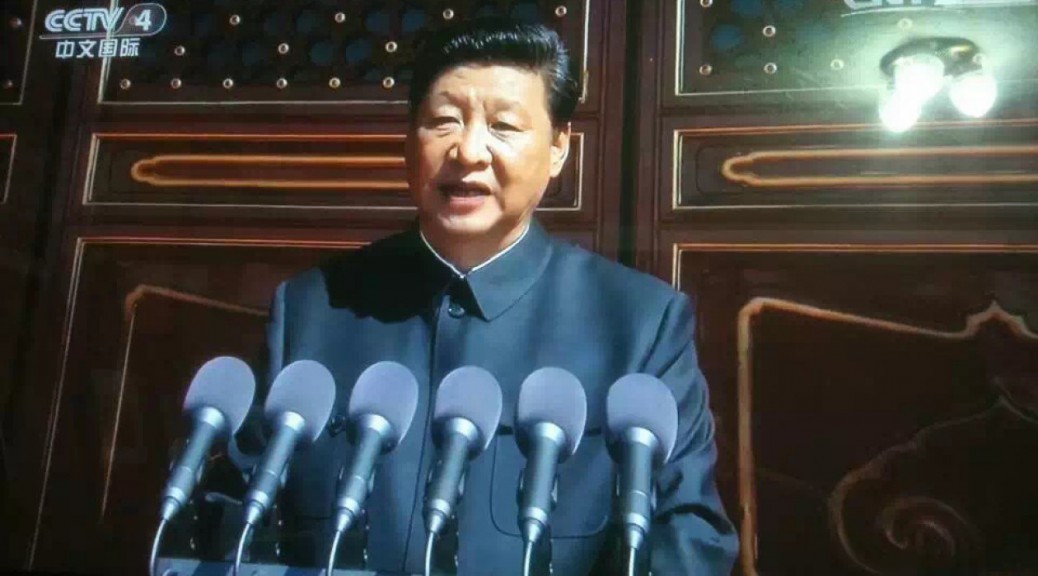 Stockholm, Sept. 3 (Greenpost)–Chinese President Xi Jinping has announced that China will reduce its army by 300 thousand. 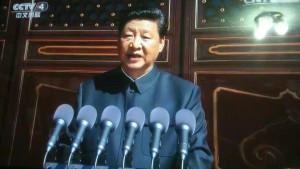 He made the announcement at the Tiananmen Parade on Thursday.

He said  the aim of our commemoration of the 70th anniversary of the victory of the Chinese People’s War of Resistance Against Japanese Aggression and the World Anti-Fascist War is to bear history in mind, honor all those who laid down their lives, cherish peace and open up the future.

Ravaging through Asia, Europe, Africa and Oceania, that war inflicted over 100 million military and civilian casualties. China suffered over 35 million casualties and the Soviet Union lost more than 27 million lives. The best way to honor the heroes who gave their lives to uphold freedom, justice and peace and mourn the loss of innocent lives brutally taken during the war is to make sure that this historical tragedy will never repeat itself.

War is like a mirror. Looking at it helps us better appreciate the value of peace. Today, peace and development have become the prevailing trend, but the world is far from tranquil. War is the sword of Damocles that still hangs over mankind. We must learn the lessons of history and dedicate ourselves to peace.

seventy years ago today, the Chinese people, having fought tenaciously for 14 years, won the great victory of their War of Resistance Against Japanese Aggression, marking the full victory of the World Anti-Fascist War. On that day, the world was once again blessed by the sunshine of peace.

On this occasion, on behalf of the Central Committee of the Communist Party of China, the Standing Committee of the National People’s Congress, the State Council, the National Committee of the Chinese People’s Political Consultative Conference, and the Central Military Commission, I pay high tribute to all the veterans, comrades, patriots and officers in China who took part in the War of Resistance and all the Chinese at home and abroad who contributed significantly to the victory of the War. I extend heartfelt gratitude to foreign governments and friends who supported and assisted the Chinese people in resisting aggression. I also warmly welcome all the foreign guests and representatives of the armed forces of foreign countries present today. 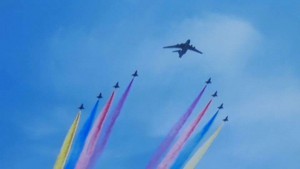 He recalled the history that Chinese people and army fought against Japanese invaders in the 1930s and 1940s.

The victory of the Chinese People’s War of Resistance Against Japanese Aggression is the first complete victory won by China in its resistance against foreign aggression in modern times. This great triumph crushed the plot of the Japanese militarists to colonize and enslave China and put an end to China’s national humiliation of suffering successive defeats at the hands of foreign aggressors in modern times. This great triumph re-established China as a major country in the world and won the Chinese people respect of all peace-loving people around the world. This great triumph opened up bright prospects for the great renewal of the Chinese nation and set our ancient country on a new journey after gaining rebirth.

During the war, with huge national sacrifice, the Chinese people held ground in the main theater in the East of the World Anti-Fascist War, thus making major contribution to its victory. In their war against Japanese aggression, the Chinese people received extensive support from the international community. The Chinese people will always remember what the people of other countries did for the victory of their War of Resistance.

“In the interest of peace, we need to foster a keen sense of a global community of shared future. Prejudice, discrimination, hatred and war can only cause disaster and suffering, while mutual respect, equality, peaceful development and common prosperity represent the right path to take. All countries should jointly uphold the international order and system underpinned by the purposes and principles of the UN Charter, build a new type of international relations featuring win-win cooperation and advance the noble cause of global peace and development.” Xi said.

In the interest of peace, China will remain committed to peaceful development. We Chinese love peace. No matter how much stronger it may become, China will never seek hegemony or expansion. It will never inflict its past suffering on any other nation. The Chinese people are resolved to pursue friendly relations with all other countries, uphold the outcomes of the Chinese People’s War of Resistance Against Japanese Aggression and the World Anti-Fascist War, and make greater contribution to mankind.

Xi stress that the People’s Liberation Army of China is the people’s army. All its officers, men and women must bear in mind their responsibility of serving the people whole-heartedly, faithfully fulfil the sacred duty of protecting the nation’s security and people’s well-being, and carry out the noble mission of upholding world peace.

Xi quoted the first Chinese book of poems, “After making a good start, we should ensure that the cause achieves fruition.” The great renewal of the Chinese nation requires the dedicated efforts of one generation after another. Having created a splendid civilization of over 5,000 years, the Chinese nation will certainly usher in an even brighter future.

“Going forward, under the leadership of the Communist Party of China, we, people of all ethnicities across the country, should take Marxism-Leninism, Mao Zedong Thought, Deng Xiaoping Theory, the important thought of Three Represents and the Scientific Outlook on Development as our guide to action. We should follow the path of socialism with Chinese characteristics, pursue the four-pronged comprehensive strategy, promote patriotism and the great spirit of resisting aggression and forge ahead as one to reach our goals.