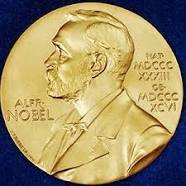 The announcement will be made at around 11:30 at Nobel Forum in Karolinska Institutet.