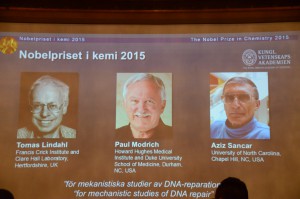 Sara Snogeerup Linse explained that The Nobel Prize in Chemistry 2015 is awarded to Tomas Lindahl, Paul Modrich and Aziz Sancar for having mapped, at a molecular level, how cells repair damaged DNA and safeguard the genetic information.

Their work has provided fundamental knowledge of how a living cell functions and is, for instance, used for the development of new cancer treatments.

“Each day our DNA is damaged by UV radiation, free radicals and other carcinogenic substances, but even without such external attacks, a DNA molecule is inherently unstable. Thousands of spontaneous changes to a cell’s genome occur on a daily basis. Furthermore, defects can also arise when DNA is copied during cell division, a process that occurs several million times every day in the human body.”

The reason our genetic material does not disintegrate into complete chemical chaos is that a host of molecular systems continuously monitor and repair DNA.

The Nobel Prize in Chemistry 2015 awards three pioneering scientists who have mapped how several of these repair systems function at a detailed molecular level.

In the early 1970s, Tomas Lindahl demonstra­ted that DNA decays at a rate that ought to have made the development of life on Earth impossible. This insight led him to discover a molecular machinery, base excision repair, which constantly counteracts the collapse of our DNA.

Paul Modrich has demonstrated how the cell corrects errors that occur when DNA is replicated during cell division. This mechanism, mismatch repair, reduces the error frequency during DNA replication by about a thousandfold. Conge­nital defects in mismatch repair are known, for example, to cause a hereditary variant of colon cancer.

The Nobel Laureates in Chemistry 2015 have provided fundamental insights into how cells function, knowledge that can be used, for instance, in the development of new cancer treatments. 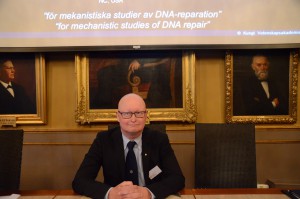 Being interviewed by Green Post, Torleif Härd Professor in Structural Biology said the discovery is very important in helping us understand how cells work and it can be very helpful for finding new methods in anti-aging and cancer.

He said this can be seen as another tool for the human body to protect itself.

Tomas Lindahl said he was surprized and feel lucky and privileged in answering Green Post question.

In interview with Nobel Media Adam Smith, he said he was surprised to some extent.

“… not 100% surprise because Im getting up in the years and I know that I have been one of the well known scientists in my field of science, which is DNA repair for many years. So the question was will there be a Prize for DNA repair, and I think many people have now realised its a very important topic of research, and if so there would be 10, 15 excellent people you could choose from, and you cant give the Nobel Prize to more than three people. So I feel very lucky and privileged to be included in the top class that was awarded.”

He was at home when he learned the news.

The American Modrich said he was in his countryside cabin when he received emails from outside.

He said he felt shocked, but happy to hear the news.