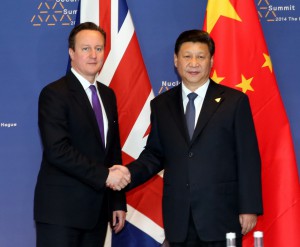 Thanks to support from both governments, China and Britain have witnessed strengthened cooperation in financial services in recent years, said Boleat.
Noting that internationalization of the renminbi, the Chinese currency, marks a key part in financial cooperation between China and Britain, Boleat said the City of London Corporation will do more to push forward cooperation with China in this regard.
He hoped Chinese and British leaders could hammer out deals to boost two-way trade and investment cooperation.
Lord Mayor of the City of London Alan Yarrow has also expressed welcome for Xi‘s visit, saying that she hoped for further strengthening of the relations between the two countries.
Yarrow last month said Britain will support the renminbi to become part of the International Monetary Fund’s Special Drawing Right (SDR) basket currencies.
“We think the world needs another reserve currency, and we think we need renminbi,” Yarrow told reporters before his trip to China.
Yarrow tuned positively on China’s renminbi pricing mechanism improvement and other financial market reforms. He stressed that the currency fluctuation is one of the features of a marketized currency.
Yarrow led a business delegation to the Chinese mainland and Hong Kong on Sept. 16-25, helping to make sure London and Britain remain the global partner of choice for China when it comes to financial and professional services.
Figures from the London market for 2014 showed persistent strong growth in RMB forex trading, according to a report by the City of London Corporation.
Overall forex-related RMB businesses trading volumes in 2014 were up 143 percent from 2013 figures, with average daily volumes reaching 61.5 billion U.S. dollars, nearly six times as large as those reported in 2011, the report said.
Chinese President Xi Jinping will pay a state visit to the United Kingdom at the invitation of British Queen Elizabeth II next week.  Enditem