STOCKHOLM, March6(Greenpost)–Thanks to the rapid development of China’s e-commerce industry, over 1,000 “Taobao villages” across the country are turning poor communities into huge online retail hubs, creating more than 840,000 job opportunities. 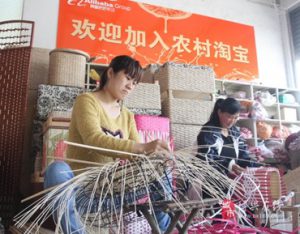 These villages are so-named because at least 10 percent of the population living in these rural communities makes its living by selling products online—mostly on Taobao.com, the Alibaba-owned consumer-to-consumer marketplace. The e-commerce annual turnover of each village is no less than 10 million yuan.

Similarly, villagers of the Shuanglongqiao Village in Nanchong, southwest China’s Sichuan province, have allured flocks of tourists, including foreigners, to stay and experience the star-level accommodation at their houses, via e-commerce platforms.

These villages offer a glimpse into how e-commerce industry spurs the rural economic growth and the farmers’ benefits.

Online retail sales of China’s farm produce are estimated at 220 billion yuan ($32 billion) in 2016, up over 46 percent over the previous year, the Ministry of Agriculture said.

The latest figures from Aliresearch showed that there were 1,311 Taobao villages across China, and over 840,000 jobs were created by the clusters.

Experts said that popularity of Internet and improvement of rural infrastructure have to some extent removed the bottlenecks restraining their information communication and logistics. The market potential and demands of the central and western part of China, especially those remote areas, was leveraged as a result.

They added that rural areas have been constrained by labor outflow, poor infrastructure, low incomes and lack of competitive advantages, while an e-commerce development will help optimize market environment, upgrade industrial structure and absorb more labors.

The profitability of e-commerce has attracted a rising number of rural residents to return home, according to statistics. Thanks to the development of e-commerce, about 12 million people left for brighter futures have come back to build up the local economy.

The development of e-commerce, as experts believe, can be attributed to favorable policies and the rising market demand.

The recently-released first policy statement from the central authorities for 2017, usually an indicator of policy priorities, emphasized the importance of supply-side structural reform in the agricultural sector, urging the development of e-commerce industry in rural areas.

At the same time, e-commerce and traditional businesses have cast their eyes to the rural areas. So far, Alilbaba has expanded its services to over 23,000 villages nationwide.

Alibaba CEO Jack Ma said that his company hopes to offer a training on e-commerce and Taobao villages to those county officials of the province, explaining that their rising awareness to develop e-commerce will guarantee the business success of the province.