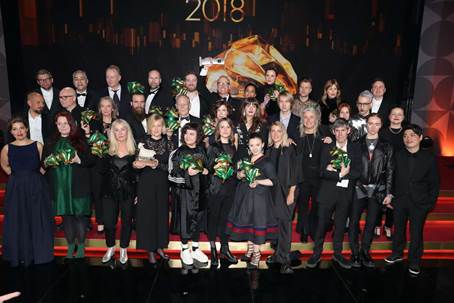 The award winners of the Guldbagge Awards on 22 January 2018. Photo: Pelle T Nilsson

At an awards ceremony, held at Cirkus in Stockholm and broadcasted live, the winners of the Guldbagge Awards 2018 were crowned. The Nile Hilton Incident received five awards, followed by Sámi Blood with three awards, including the Guldbaggen Audience Award. The Square andBorg/McEnroe received two awards each.

Best Actress in a Leading Role

for the role as Elle Marja in Sámi Blood (Sameblod)

Best Actor in a Leading Role

for the role as Noredin in The Nile Hilton Incident

Best Actress in a Supporting Role

for the role as Agnieszka in Strawberry Days

Best Actor in a Supporting Role

for the role as Lennart Bergelin in Borg/McEnroe

for the screenplay for Sámi Blood (Sameblod)

for cinematography in The Square

for the editing of Sámi Blood (Sameblod)

for the costumes in The Nile Hilton Incident

for the sound on The Nile Hilton Incident

for her achievements in Beyond Dreams (Dröm vidare)

The board of the Swedish Film Institute extends the 2018 Lifetime Achievement Award to:

The Guldbagge Audience Award (Guldbaggens publikpris) is a new award at the Guldbagge Awards Ceremony. It includes all 41 Swedish feature length films that premiered in cinemas during 2017. The award is produced by The Swedish Film Institute in collaboration with the Swedish news media Aftonbladet.

Awarded annually since 1964, the Guldbagge (“Golden Beetle”) is the name of the Swedish Film Institute’s award for achievements during the previous year. The award itself, in the form of a flower chafer beetle, was designed by the artist Karl Axel Pehrson.