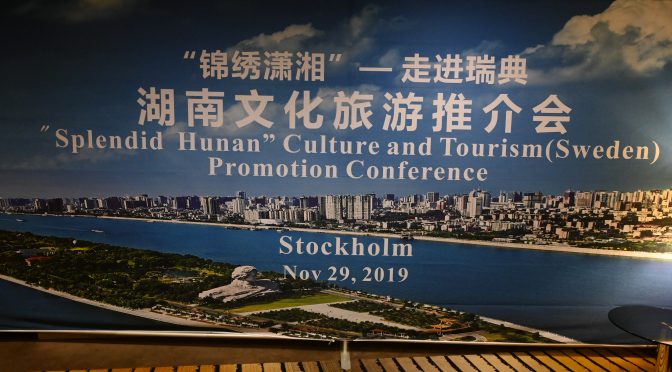 Yu Xinrong, Secretary of Party Committee of Department of Culture and Tourism of Hunan Province, Central China said Hunan enjoys very rich tourism resources and has many cultural relics such as Yueyanglou Pagoda, Mawangdui cemetery, Maozedong’s hometown. The famous Zhangjiajie tourism spot was the shooting site for animation Avanda, its beauty has attracted many people.

Yu said that Hunan also has China’s largest lake Dongting Lake which stretches over 400 kilometers. Hunan has many ethnic minorities thus has rich culture. Hunan’s cuisine is famous for its hotness. The pheonix city and Furong Town are famous for its history.

The ancestors of the Chinese nation, Emperor Yan and Emperor Shun were buried in Hunan, Zeng Guofan and Zuo Zongtang were born in Hunan and became famous for their achievements in Chinese history. Hunan also boasts many ethnic groups which all have their own culture and traditions.

Cecilia Rahmqvist, Director of Laplands tourism bureau in northern Sweden also introduced Kiruna’s Ice Hotel, Tree Hotel and Ice tourism resources. She said that they used solar energy to keep the ice even in summer. She welcomed Chinese tourists to visit them.

During the promotion conference, audience also watched promotion video which showed all the beautiful tourism resources and infrastructure in Hunan and impressed the audience a lot.

During the promotion conference, a dozen of pictures showing the beauty of Hunan were also displayed.