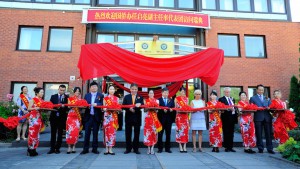 During his visit in Stockholm, Ren had helped cut the ribbon for the new office building of Swedish Chinese Federation of Industry and Commerce. Ren said he was happy to attend this opening, he believed that the building would create good conditions for overseas Chinese in Sweden and facilitate them to conduct various activities such as lectures, dancing and singing as well as tourism, Chinese cousin, Kongfu  and green-tech. 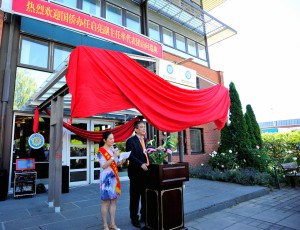 President of Swedish Chinese Federation of Industry and Commerce, Gongshanglian, Wang Jianrong also briefed the delegation about their plans in the future.

After the grand ceremony, the delegation also visited Swedish Chinese National Federation or Huazong which held a brief lunch meeting with the company of Chinese Embassador Chen Yuming. 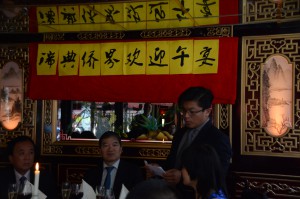 During the lunch meeting, Ye Peiqun, Execultive Chairman of Swedish Chinese National Federation said over the past five more years, Chinese in Sweden has made great efforts in protecting Chinese interest and serving as a bridge between Sweden and China.

Ren said he was glad to see the Chinese in Sweden are successful in their work and life.

In the afternoon, Ren and his delegation held a seminar with Chinese in Sweden organized by the Chinese Embassy. 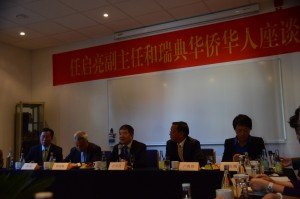 Ren said the main purpose for his visit to Sweden is to greet the Chinese and listen to Chinese voices about their difficulties and needs.

“In the past, over 60 million overseas Chinese have made great contribution to China’s development, now China has developed a lot and China likes to have more cooperation with the overseas Chinese,” Ren said.

Guo Yancai, Chairwoman of the Women’s Committee under the Swedish Chinese Federation or Hualian, said the summer camping in China this summer was very good.  She hopes there will be more of this kind of activity.

The Chinese schools masters including Ruijing, Ruiqing, Xinxing and others also mentioned to unite to conduct activities under the leadership of the Overseas Chinese Affairs of the State Council.

They are grateful for the assistance from the State Council and the Chinese Embassy. 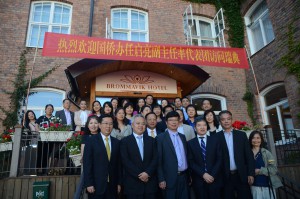 Other members of the delegation include, Zhou Hong, Lu Haitian, Liu Hongmei and Zou Chuanbiao.