BEIJING, Jan. 6 (Greenpost) — The continued depreciation of the yuan against the U.S. dollar since August should not be grounds for doom and gloom, as a multitude of factors underpin the Chinese currency in the medium and long term. 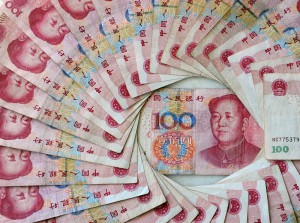 The yuan has been heading south since the People’s Bank of China (PBOC), the central bank, revamped the foreign exchange mechanism in August to make the rate more market-based.

The onshore yuan (CNY), traded in the Chinese mainland, declined 4.05 percent against the greenback in 2015. During the first two trading days of 2016, the offshore yuan (CNH) traded in Hong Kong, has consistently gone down, losing as much as 1.3 percent at one point and putting pressure on the onshore yuan to sink lower.
Short-term volatility of the yuan is understandable as “hot money” makes an exit out of China, whose economy is heading for its slowest pace in a quarter century as industrial overcapacity and housing overhang still haunt. Meanwhile, the United States is seeing recovery and raised interest rates in December, with more rises expected in 2016.
However, there is no risk for the yuan to see substantial depreciation in the long term.
China has a mammoth foreign exchange reserve (3.4 trillion U.S. dollars), sound economic fundamentals, commendable growth in labor productivity and determination to carry out necessary reforms to unlock vitality.
The inclusion of the yuan by the International Monetary Fund in its elite basket of currencies, effective this October, will give the yuan a leg up toward internationalization.
Another favorable factor is the continued weakness of global commodity prices. Reduced costs help China, the world’s biggest commodity consumer, boost its current account surplus, thus offsetting capital outflows and the depletion of its foreign exchange reserve.
A drop of 10 dollars in average oil prices, for example, would reduce the costs by 25 billion dollars a year, according to Goldman Sachs’s estimate. Low crude prices may prop up the surplus to about 360 billion dollars this year, it added.
The authorities wouldn’t want or tolerate substantial declines in the yuan either. A typical goal is to keep the currency “basically stable.”
When the PBOC introduced the new foreign exchange rules in August, there were doubts that China was purposely devaluing the yuan to boost exports. That assumption was unfounded. The authorities have no intention to manipulate any drastic depreciation as the contribution of foreign trade to the country’s economic growth has declined to the level seen at the beginning of the century.
China is capable of keeping the yuan’s exchange rate at a “reasonable” level and sees no basis for continued depreciation, PBOC Vice Governor Yi Gang said at a recent press briefing.
“In the event of drastic fluctuation or abnormality in international balance of payments and cross-border capital flow, the central bank will not hesitate to intervene,” Yi added.
To reduce the market’s fixation on the yuan-dollar rate and better reflect the market, China Foreign Exchange Trade System (CFETS) began to release a yuan exchange rate composite index in December that measures the currency’s strength relative to a basket of 13 currencies, including the U.S. dollar, euro, and Japanese yen.
An update released on Monday showed that on the last day of 2015, the CFETS yuan index stood at 100.94, meaning the yuan appreciated 0.94 percent compared to the level at the end of 2014.  Enditem