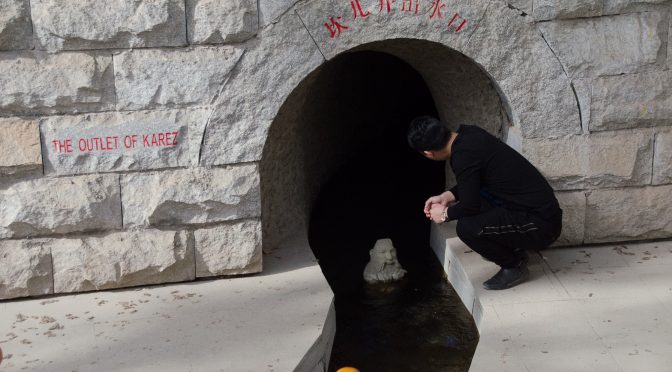 Stockholm, May 7(Greenpost) — Last year when I exhibited my Xinjiang Photos which were mostly from northern part of Xinjiang, my Turkish colleague Gurgun asked me whether I have visited Karez. I said unfortunately not, but I will go there to have a look.

On March 17th, I went to the Fire Mountain first because I have seen the fairy tales Journey to the West hundreds of times and dreamed of going there to have a look.

After a long journey in the baren land, I and my friends were almost scorched. I felt very disappointing because in the film it was such a dramatic scene, but in reality, it was dull and boring. Some artificial constructions tell the story of Journey to the West with Sun Wukong holding his Golden Stick and the Iron Fan Princess holding the Iron Fan. But what I saw is just the baren mountain ranges which look like many explosive fires. I was tired and wanted to escape the ancient graveyard which I felt quite regretful later.

We hurried up to the Karez which was the most important part that I like to see. The scene along the road is simply the yellow land, sand and wind.

But when we arrived in Tuokesun Town where the Karez museum sits, it was quite nice. The lunch was babecued mutton. The sun was strong and it felt wonderful. The spring indeed began in mid march.

According to historical research, Turpan used to have over 1270 Karez, but due to the draught, some Karez become dried. Now there are about 1100 Karez reaching about 5000 kilometers. And the trend is that it is becoming fewer and fewer. The reason is that Karez is difficult to maintain and the cost for it is too high. Instead, nowadays people began to use machine pump for agricultural irrigation.

But Karez was a great method for the ancient people to survive and live a better life. There are many theories in who invented the Karez. Some say it was introduced from Iran or Soviet Union, some say it was from Han Dynasty from Shaanxi, some say it was a combination of local invention with improvement from communication with outside world.

Whatever, Karez was listed a sone of the three greatest projects in ancient China together with the Great Wall and the Grand Canal.

I also believe great civilization exhisted in Turpan because those dried corpse themselves have shown that. Next time I like to talk about that.