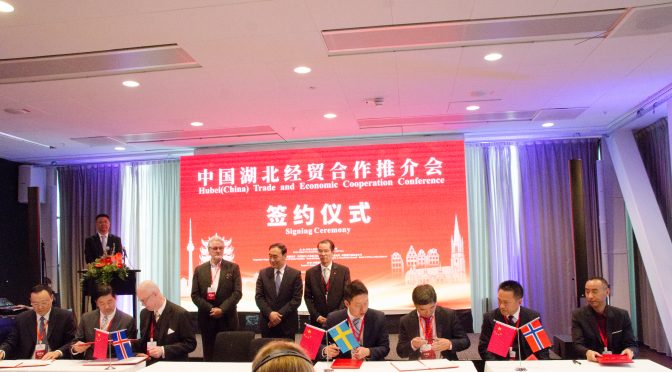 Many Chinese delegations visited Sweden and signed contracts and then went back but seldom come back. Swedish complained. But Vice governor of Hubei Province Zhao Haishan said they are serious about cooperation with Sweden at a grand promotion ceremony held in Stockholm on Thursday also marking the 69th anniversary of establishment of diplomatic relations between China and Sweden.

Chinese Ambassador Gui Congyou said China pays great attention to economic and trade relations with Sweden , especially against the background of “trade war” with the U.S. China is willing to cooperate with Sweden. For two years Sweden has surplus in trade and investment with China due to big project such as Geely. China hopes Both sides continue to increase investment to each other. Sweden has become the largest trade partner with China outside the EU. Chinese embassy also seeks to see more cooperation between Hubei province and Sweden.

Zhao Haishan said at the promotion conference that Hubei and Sweden are not new in cooperation. After many years of cooperation and rapid development in China, Hubei province has decided to pay greater attention to cooperation with Sweden because of their complementary factors for each other.

Zhao said Hubei is complete in industrial systems and loves to further sustainable development where Sweden is in the good position. Hubei province also has great automobile industry and he was impressed by visiting Volvo cars in Gothenburg. He said Hubei has 128 universities and 1.5 million university students, which are both talents and consumers.

The huge delegation consists of about 80 members from different cities and companies. Three women vice mayors from Wuhan, Xiangyang and Yichang came along to have a presentation about their respective cities.

Hubei province is the center of China and the communication hub for Beijing, Shanghai, Guangzhou and Xian as well as Chengdu in terms of Belt and Road Initiative. Why? Because all the goods that are exported to Europe or other BRI countries via Xinjiang will go through Wuhan.

Qin Jun, Director General of the Department of Commerce said that Hubei province held a China-Nordic Exhibition gallery in Shanghai Import Expo last November. They saw great interest from nordic countries and this event is also a follow up for last Novermber’s Shanghai’s CIIE expo, but also a preparation for this coming november’s event. So they have prepared for the signing of 16 projects between Chinese and Swedish and Norwegian counterparts.

Further more, Vice governor Zhao Haishan and Qinjun and other members from Bank of China in Huibei province even visited Gavleborg and met governor Per Bill.

After their remarks to express further willingness and intention for further cooperation, they also witnessed the signing of a project in sugar reduction between Holee and THIS Less is More Community Nordic AB..

The vice governor of Hubei and his 16 member delegation also visited the Gavle Innovation Hub and observed how the hot chokolate without sugar were made. They also tasted many kinds of reduced sugar products.

Qin Jun said they are very serious about these agreements and will have further follow-up about them.

Hubei province has already cooperation with Norway in Salmon equipment production and now they like to cooperate with Sweden too. The delegations also went to Iceland, Finland, Denmark and Norway.