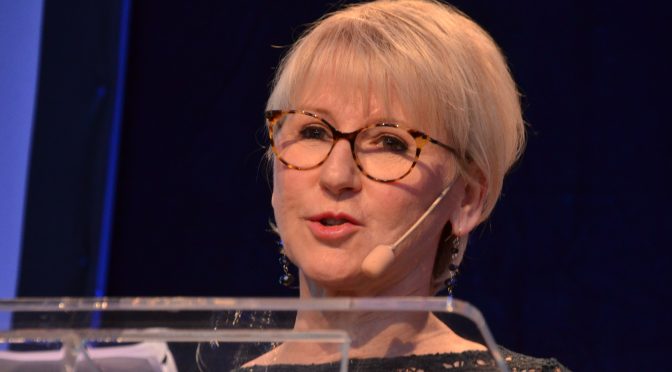 Stockholm 14 May(Greenpost) Over 400 high-level policymakers, researchers and practitioners gather in Stockholm for the sixth annual Stockholm Forum on Peace and Development to be held between May 14 and 16th.

This year’s forum centres on the topic ‘From crisis response to peacebuilding: Achieving synergies’ and was opened by Ambassador Jan Eliasson, former United Nations Deputy Secretary-General and Chair of the SIPRI Governing Board. Ambassador Eliasson’s address touched on the broad range of actors and peacebuilders and emphasized the risks of actors working in silos.

The first day of discussion ended up with the closing remark by Swedish Minister for Foreign Affairs Margot Walstrom. She said that the good example of peace building was Columbia and it was so good that their President even won the Nobel Prize for Peace.

She said it is important to involve women in the process and that is exactly the Swedish foreign policy and building strong institutions is also very important.

HE Peter Eriksson, Minister for International Development Cooperation, Sweden, provided introductory remarks and pointed out that the various efforts among the development community ‘do not always add up.’

Guest speaker for the opening session was Dr Sima Samar, Chair, Afghanistan Independent Human Rights Council and member of the UN Secretary-General High-Level Panel on Mediation. Dr Samar shared her knowledge of Afghanistan—a country that has endured over 40 years of conflict. From her experiences, ‘when people’s human rights are violated; when their freedom is restricted; when there is discrimination against people; where there is no equality; and there is no access to justice for people—then conflict starts.’ She underlined the need for the meaningful inclusion of women and minorities at all stages of the peace process and during post-conflict reconstruction.

The theme for the opening panel was ‘Crisis response and peacebuilding: How to create synergies’ and was moderated by Annika Ben David, Ministry for Foreign Affairs, Sweden.

Achim Steiner, Administrator of the United Nations Development Programme, highlighted the World Bank’s ‘Pathways to Peace’ report and how the United Nation’s Sustainable Development Goals (SDGs) have laid out a vital roadmap for the future, but also for managing the risks of today.

HE Raya Haffar El Hassan, Minister of Interior and Municipalities, Lebanon, talked about the different agendas between donors and how better synthesis between donors could lead to a more sustainable peace.

Hafez Ghanem, Vice President for Africa, World Bank outlined the new role of the World Bank in investing in peace. Pointing to a number of key initiatives and ways of analyzing the Sahel; the Lake Chad Basin; and the Horn of Africa regions, he stated the need to focus on the drivers of fragility such as climate change and exclusion. He also stressed to support the local government to keep peace and development.

HE Hirut Zemene, State Minister for Foreign Affairs, Ethiopia, emphasized the role of youth development—a theme echoed by other panellists—and stressed the demographic challenge in Ethiopia and elsewhere.

General Dennis Gyllensporre, Force Commander of the United Nations Multidimensional Integrated Stabilization Mission in Mali (MINUSMA), called for better conflict analysis in the early stage of crises and the need to share in a combined body of knowledge. General Gyllenspore stated ‘we all have different blind spots depending on what lens we use.’ Sharing knowledge, he said, ‘will give us a sense of a common understanding of the conflict dynamics.’

Karin Wallensteen, State Secretary for International Affairs, Prime Minister’s Office, Sweden, spoke on collective outcomes. ‘I believe that if we have this nexus of humanitarian efforts; development efforts; and peace efforts we can give the relief and at the same time keep our focus on the SDGs.’

In the afternoon, Somalian Minister for Foreign Affairs Ahmed Isse Awad said his country is in a better position now with 80 percent of the people have mobile phones, good infrastructure, schools and other conditions. But the governance of the government is still a challenge for them, thus he called on the donors to support his government to strengthen good governance.

Fatima Shehu Imam, Director of Civil Society Organizations in Borno State, Nigeria said great challenge ahead because they have about 500 thousand orphans in northern part of Nigeria. These people need more care from government and social organizations because they are isolated or even resentful, no one care about them.

Mohammed Ali Al Hakim, Minister of Foreign Affairs of Iraq said Iraq is on the right track and he promised to pay greater attention to gender issues. Right now they have about 30 women diplomats and he plans to increase more women Ambassadors in the future.

Annika Soder Deputy Minister for Foreign Affairs of Sweden summarized Swedish efforts in promoting feminist foreign policies even in the UN Security Council. She blamed some super power of implementing unilateral actions and not cooperative for some good ideas. But she stressed the feminist policies in the long run is more sustainable in peace keeping and development.

Peter Mauer said in the afternoon high level panel that things change a lot. For example they prepared a lot of medicine in disaster or conflict humanitarian aid, but found out that people need more electricity and telecommunication.

The moderator was Dan Smith, Executive Director of SIPRI.

When asking a delegate from Nigeria about China’s role in Africa, he said China can do more, for example building more water conservancy projects to secure safe drinking water and keep water clean.

The forum was jointly held by SIPRI, SIDA and Foreign Ministry of Sweden.