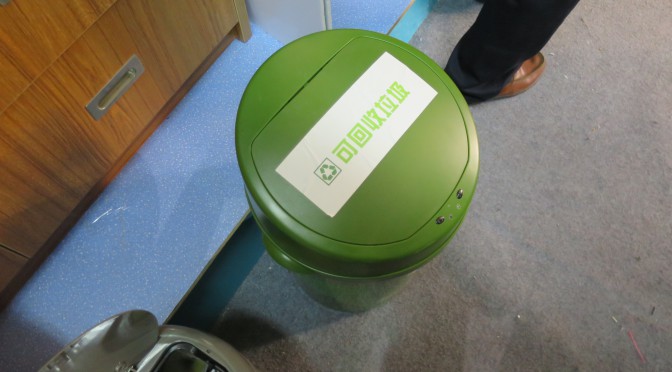 BEIJING, Nov. 28 (Xinhua) — Open an app, locate the nearest recycling machine, throw the bottles inside and get an instant reward on your metro card.

This is how more than 18 million plastic bottles were recycled in Beijing in the past few years using 2,200 reverse vending machines (RVM) offered by Incom recycle.

Backed by one of the world’s largest asset managers, Franklin Templeton Investments, and recently partnered with Norwegian recycling firm Tomra, Incom is one of many Chinese firms in the green industry that are attracting global investors’ attention.

As China heads toward a green economy, the country’s green sector including waste recycling, sewage disposal, energy conservation are growing at a rapid pace and are hungry for investment — from both home and abroad.

According to official estimation, China will need at least 2 trillion yuan (313 billion U.S. dollars) every year to fund its green sector, 85 percent of which needs to come from capital other than fiscal fund.

The development of the green industry in China is still at the preliminary level, said Haakon Volldal, vice president of Tomra, the world’s biggest RVM maker that just established two joint ventures with Incom in China this month.

“In this five-year period, China can take big steps towards having a professional green industry,” Volldal said.

The biggest obstacle for green companies to get the funding they need is always their own profitability.

But companies like Incom are changing the traditional mindset by incorporating Internet technology into its business model to prove one fact: green companies can make money, too.

For the first time since its founding in 2008, Incom recycle has turned a profit this year through selling equipment and advertising for beverage brands on the machines, according to the company’s general manager Chang Tao.

Future income streams may also be generated from data on consumption patterns collected by its machines — do people in Beijing actually drink Coca-Cola more than Pepsi? Which flavor sports drinks do males in Chongqing prefer?

Besides making profits through advertisement and big data, Incom also launched “the Uber for recycling.” Their new service allows people to make an appointment on their phone and the nearest collector will come retrieve used books, magazines, electronic devices, or plastic bottles.

“To some extent, the returns on green projects are not as high compared with other programs, but the cash flows are relatively stable and the market risk is actually lower,” said Lan Hong, vice director of the ecological research center of the central bank at a conference.

According to the interim report of Industrial and Commercial Bank of China (ICBC), the country’s biggest lender, only 0.05 percent of its loans to the environmental protection and water conservation industry went bad in the first half of this year, while the average bad loan rate of the bank reached 1.4 percent.

Safe cash flows prompted the bank to invest more in the green industry. By the end of September, loans outstanding in ecological protection, clean energy use, and energy conservation amounted to nearly 700 billion yuan, accounting for more than 10 percent of total loans from the bank.

In addition to stable returns, a much more favorable policy environment also makes bets on the green industry more attractive to investors.

China’s 13th Five-Year Plan, which outlines development strategies for the country from 2016 to 2020, is expected to put green growth at the center of the agenda.

To realize the commitment, a “green financial system” is to be established, with a mechanism to lower the lending cost of green companies through “green loans,” “green bonds” and even a “green bank” designed specifically to offer low-cost funding, according to Ma Jun, central bank economist and also the head of a Green Finance Committee launched this year to address funding issues for the industry.

Officials are already setting rules on the bond market, which will give companies an alternative to finance longer-term green projects as most banks are restricted with short-term loans.

The upcoming climate change conference in Paris, which Chinese President Xi Jinping will attend, may further highlight the role of China in the world’s effort on environmental protection and bring green companies in China into the sight of global investors.

“Foreign capital and firms are even more optimistic about the development of the green economy in China than domestic ones,” said Chang Tao, general manager of Incom, “the market in China is so enormous that they can’t afford to miss out.”  Enditem