STOCKHOLM, Dec. 21(Greenpost)–Swedish Ice Hockey and Bandy players are going to play in China soon, thanks to the efforts of Perka Holmström.

What makes it historical is that it is the first time the players wore a jacket from China with both Chinese and Swedish flags on.

Ice Hockey is one of the most popular sports in Sweden.

Hans Malm, Chairman of the Hammarby Hockey, Perka Holmström, founder of Nordic Vikings Group and Vanessa Folkesson, Executive Director of Nordic Vikings Winter & Outdoor Sports Alliance attended the ceremony of receiving the clothes.  As a tradition, the team members take a photo together every year. 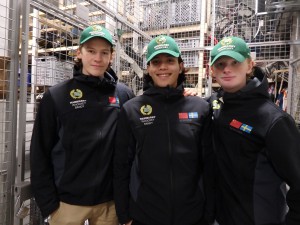 Hans Malm told GreenPost that Hammarby in Stockholm was established in 1897 as a football team, but it became one of the first seven  Ice Hockey teams in 1921. In the 1930-50s,  Hammarby won 8 national Championship gold medals.  In 1996, they won the championship in Nordic League competition. Today they have 275 players including  25  professional and 250 young non-professional players. Among them, there are four Chinese players.

“I’m happy that we have been cooperating with Tutwo for a year. Today the players put on the uniform with Chinese flag. It means a new journey. Although Chinese ice hockey is still weak, we hope to train  excellent players to send to China through cooperation in brands and exchange of players. ” said Malm.

Perka Holmström has been the brain and active player in promoting China-Sweden cooperation in Ice Hockey. It started in 2005 with the Nordic Vikings journey in Asia League. He began to play to skate, the base of everything at age of four and played both Ice Hockey and Bandy during the youth.  He was also interested in football, tennis, basketball and skiing.  When he was 20 years, an injury changed his career, and he turned into pro in cycling. In 1988, he started the studies in economics at Stockholm University.  That enabled him  the road and interest to combine sports with economics. He thinks that it will be a good opportunity for Swedish Ice hockey to enter the huge Chinese market.  And he tried in 2003 to begin to train Chinese players both from Beijing and Heilongjiang province. In 2005 Nordic Vikings, Harbin and Qiqihaer participated in Asian Ice Hockey Championship with players from both Sweden and China, where the Nordic Vikings still have most of the Chinese record in Asia League. This time the Swedish players will play with Beijing Haotai Ice hockey team which won junior championship in China.

He established Harbin Bandy team in 2015. He also dreams of building a woman bandy team to play  for an Olympic Medal at 2022 Beijing Winter Olympics.

He said the key for Chinese players to win games is to learn how to be a team member and how to coordinate with other players helping each other-he calls that “the secret of playing without the puck or ball”.

He said to select good Ice Hockey and Bandy player, the earlier they start the better and it is better to begin to exercise skating early. However it is first when they are 15 or 18, it is time to decide whether they will be engaged in Ice Hockey or Bandy, or both sports as some of the best players in Sweden has done in the past.  So far they  have had 40 players and they hope to have another ten to choose from this year. He hopes Chinese parents can support children to play both sports on ice and make efforts for both Chinese Bandy and Ice Hockey to go to the outside world.

Daniel Zhang was born in Sweden in 1999. He will go to China to play in Haotai team in Beijing.

“I’m both Ice Hockey and Bandy player. I am also a player and Captain in Nordic Vikings Team. I study at Stockholm International English school, I have begun to excercise when I was just 8 years old. I will play on behalf of China’s Youth team.  ” said Daniel Zhang.

Zhang Jing, Daniel’s mother told Greenpost.se  that she was not worried about Daniel’s studying.

With that we end this edition of Ice Hockey program, we shall have further following up since Beijing has won right for hosting the 2022 Winter Olympics, we hold that Sweden can play a bigger role, maybe, let’s see. If you have any comment or suggestions, write to us,  info@greenpost.se .