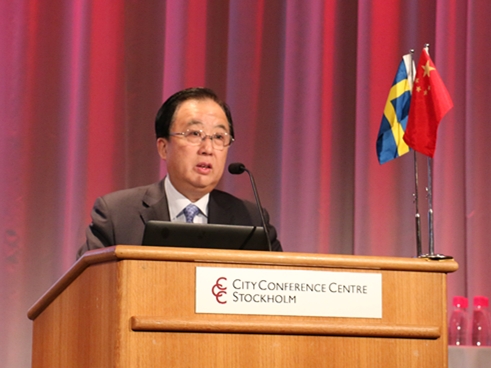 To Build the Future of Green Economy Together

By His Excellency Chen Yuming, Chinese Ambassador in Sweden

On this day sixty-seven years ago, Sino-Swedish diplomatic relations were formally established. On this anniversary of great historical significance, representatives from political, business, and academic fields of China and Sweden are gathered at the 2nd China-Sweden Green Economy Cooperation Conference, to discuss future collaboration of Sino-Swedish green industries. We are full of expectation. On behalf of the Chinese Embassy in Sweden, I would like to extend our very warm welcome to all guests present, and express most sincere gratitude towards the Sweden-China Trade Council, the Sweden-China GreenTech Alliance and the Swedish Environmental Research Institute, as well as all the participants and partners for your hard work and contributions.

The success of the 1st Green Conference in 2015 enabled us to see the common wish of our two countries to deepen green industry cooperation and the huge potential in this regard, and also set a good example for the second Conference. The Conference as well as my speech has very clear goals, which is to provide more information, generate more opportunities, seek better solutions, and translate words into actions. Simply speaking, the aim is to discuss how we can deepen green cooperation between our two countries.

In 2016, the Chinese economy maintained healthy and steady growth. Significant changes have occurred in the growth pattern, economic structure and development driving forces. The fundamentals of the Chinese economy for long term growth remains unchanged.

——The macro-economy is operating stably. Despite an external environment of weak international trade and investment and insufficient growth impetus, China secured a 6.7% GDP growth in 2016. This is faster than most other major world economies, and contributes more than 30% of the global economic growth.

——The supply-side structural reform has made solid initial progress, and green development has accelerated. Last year, the production capacity of steel and iron reduced by 65 million tons, and 290 million tons of coal production capacity was removed. The proportion of the increased value of service industry in GDP reached 51.6%. Energy consumption per unit of GDP decreased by 5% from last year, and the share of clean energy consumption up by 1.6%.

——Trade and investment continue to grow and benefit the world. In 2016, despite international trading was entering a winter, China’s import and export still achieved a growth of 0.6% to USD 3.66 trillion. The annual utilized foreign investment totaled USD 120 billion, a year-on-year increase of 4.1% . Outbound non-financial direct investment reached USD 170 billion, up 44% from last year, adding vitality to the global economy and creating a large amount of wealth and employment opportunities for receiving countries.

In 2016, Sino-Swedish economic and trade relations continued to develop. The two-way commodity trade drop slightly, but the service trade and mutual investment kept growing. According to Chinese statistics, the total value of services traded between our two countries in 2016 reached USD 3.74 billion, up 4% from last year. The actual investment by Swedish enterprises in China reached USD 747 million, increasing 41.7%. There were 77 technologies imported to China from Sweden, with a contract value of USD 1.93 billion, at a growth rate of 157.6%. The investment by Chinese enterprises in Sweden reached USD 190 million, to a cumulative volume of USD 3.57 billion. Our two-way investment is much bigger in size, of higher quality and more diversified.

The steady growth of the Chinese economy and deepening Sino-Swedish trading relationship have laid a solid foundation for further collaboration between our two countries. Continued improvement in China’s investment and business environment has made our cooperation more convenient. China has revised relevant laws and adopted a comprehensive negative list of foreign capital access. Foreign investment outside the listed areas only need to be filed without approval, saving time and cost. The entry permit for foreign investment in service industries, manufacturing and mining has been relaxed significantly, and foreign investment in high-end, intelligent and green manufacturing has been encouraged. China also keeps strengthening protection of intellectual property rights of foreign investments, as well as institutional building of foreign collaboration on intellectual property, and gives more support to foreign investors to expand the channels of financing. In 2016, over 60% of businesses in the American Chamber of Commerce in China regarded China as one of the world’s three major destinations of investment. More than half of the EU enterprises in China are planning to expand investment. All this demonstrates that the investment environment in China is still highly regarded by foreign investors.

I would like to quote some numbers. From 2011 to 2015, the annual growth rate of the Chinese energy conservation and environmental protection industry was 15%, double the speed of overall economic growth. As the 13th national five-year-plan set out, by 2020, the water consumption per ten thousand Yuan output value will reduce by 23% compared to 2015, whilst the energy consumption per unit of GDP will drop by 15%. Carbon dioxide emissions per unit of GDP will reduce by 18%, whilst non-fossil energy shall reach 15% of total energy consumption. According to the estimation of People’s Bank of China, during the 13th Five-Year Plan period, the yearly financing requirement of the Chinese green economy would take up 3% of GDP, equivalent to 300 billion USD, of which 10-15% is to be invested by government, and 85-90% by the private sector.

A clear conclusion can be drawn from these numbers. China’s ambitious goal of green development will bring valuable opportunities for development of many related industries. According to the green development path set out in the 13th Five-Year Plan, we will seek systemic technology solutions to improve environment administration. Agricultural modernization will follow a resource-conserving and environmental-friendly path of development featuring effective production and product safety. High-end, intelligent, green and services-oriented manufacturing will be given priority. Reserving and distributed energy will be developed and new-energy cars will be promoted. Building of a safe and effective, intelligent and green and interconnected network of modern infrastructure will accelerate. New types of towns and beautiful livable villages will be built, including green, forest cities and “sponge cities”. Comprehensive environment improvement project will be carried out in 130,000 villages, and waste treatment project will be implemented in 90% of administrative villages.

These plans are not empty talks. Instead, they will be fully supported by government policy. In green finance, we will have green credit, green fund, green insurance as well as international collaboration, to provide financial guarantee for green development. In green taxation, China will introduce environmental protection tax to replace current pollution discharge fees, so that the new exemption regulations would offer effective support to high-technology environment-friendly enterprises. China will also implement new green standards in different areas and industries, to meet the requirements of green development. Government procurement will also strictly follow green and environment protection standards. The above measures will raise China’s green development to a higher level.

Another important opportunity is the implementation of the One Belt and One Road initiative. The ultimate goal of the initiative is to build up a community of common interests, shared responsibility and common destiny based on mutual political trust, economic integration and cultural inclusiveness. Thanks to our efforts over the part three years, the Belt and Road initiative has achieved initial success and generated tangible benefits for countries, regions the other participants along the belt and road. The interconnection of infrastructure has facilitated trade and investment and improved international supply chain, forming a new model of regional economic cooperation. Sweden is one of the founding members of the Asian Infrastructure Investment Bank. The Swedish Minister of Infrastructure, Anna Johansson, will attend the high-level conference of the Belt and Road Forum for International Cooperation this week. We welcome and hope to see more participation from Sweden in the construction of Belt and Road. I am convinced that the Belt and Road will give enterprises and industries of our two countries broad platform to achieve great results in our respective countries and third-party markets.

Third, what are the starting points and ideas for the green collaboration of our two countries？

We need to enhance mutual trust and deepen mutual understanding. Our ever growing economic and trade relations and mutual investment still has great potential. Investment by China to Sweden in 2016 only accounted for 5.1% of China’s total investment to EU. This figure should have been larger. As the Chinese Ambassador in Sweden, I will spare no effort to advance the mutual understanding of the our two countries. I also hope that guests present here will help Swedish enterprises better understand China, and actively promote Sweden in China.

We need to identify priority areas and work for in-depth cooperation. When we were designing the theme and the contents of this conference, we focused on the combination of the technology that China needs and the advantages of Swedish industry, and discussion of collaboration in various fields, including renewable energy and conservation, intelligent and green transportation, air and water quality management, as well as eco-cities development. It is hoped that breakthroughs for deeper cooperation between our two countries can be found from these areas.

We need to build effective platforms and discover innovative cooperation patterns. The Sino-Swedish Green Economy Conference is an effective attempt in this regard. We will explore new model of cooperation and establish broader platform for our companies. For example, in the process of the Belt and Road development, we can connect Chinese and Swedish industries, and support the establishment of China-Sweden small and medium-sized enterprises fund and China-Nordic cooperation fund. I hope that all of you will take an active part in the discussion and contribute your valuable thoughts and ideas.

Ladies and gentlemen, the future of Sino-Swedish cooperation is like the spring in Sweden – full of life and vitality. As long as we follow the principles of open and win-win cooperation, and mutual respect and understanding, a more beautiful season of cooperation is right there waiting us. In conclusion, I sincerely wish the conference a great success. Thank you.