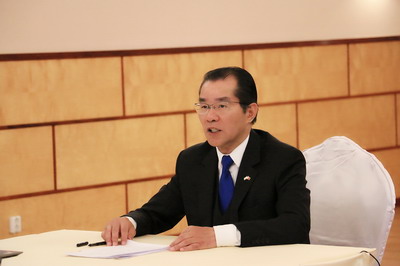 Stockholm, Sept. 6(Greenpost) — August 18th marked the three year anniversary of Chinese Ambassador to Sweden Gui Congyou’s mission in Sweden. Over the past three years, he has visited many places in Sweden and has been engaged with many ordinary people, prominent figures, business people and politicians in addition to foreign ministry colleagues in Sweden. He has impressed many and he said he also learnt a lot from Sweden. What will he do to improve Sino-Swedish relations in his next three years mission? Greenpost founder and chief editor Xuefei Chen Axelsson had a written interview with Ambassador Gui recently.

Q: Hello Ambassador Gui, by August, you have been in Sweden for three years as an Ambassador. During the past three years, you have visited many places in Sweden, what is your impression about Sweden?

A: Over the past three years, I have visited two thirds of the Swedish provinces and have contacted and widely exchanged views with people from all walks of life. I visited many enterprises, factories and farms, got to know Swedish social, cultural and economic characteristics and understood the wish and thoughts of Swedish people on Sino-Swedish relations. I made a lot of friends in Sweden and I got a lot of unforgettable memories on Swedish people. I felt Swedish people are very kind and enthusiastic about China. With very friendly emotion, they all support further cooperation and exchange in various fields. I think most of Swedish people are willing to deepen cooperation and exchange with China.

I was so impressed by Swedish beautiful ecological environment and people’s high awareness in environmental protection. In such an environment with blue sky and clean water, I often discuss with my Swedish friends on how to combine Swedish advanced sustainable development theory and practices with China’s new development concept of being innovative, coordinated, green, open and sharing. We have reached a consensus that China and Sweden shared similar development idea and mutual compatibility in various industries and there will be great potential in environmental and ecological protection. We believe that China and Sweden are able to join hands to play a bigger role in dealing with climate change and pushing forward sustainable development.

A: This year marks 70th anniversary of Sino-Swedish relations. 70 years ago, Sweden took the lead among western countries to surpass the political system and ideological differences to become the first country to establish diplomatic relations with China. Over the past 70 years, friendly communication and exchange have been the main melody of bilateral relations and China has always treated Sweden as a friend and important cooperation partner.

Now we are the largest trade partners for each other both in nordic region and Asia. Sweden has kept its surplus for many years in trading with China. China and Sweden enjoyed close communication and exchange in science and technology, education and culture. China and Sweden also kept good communication in multilateral relations, jointly advocated multilaterism, free trade, against trade protectionism, in favor of maintaining economic globalization and multilateral trade, devoted in peaceful solutions for regional conflict and hot issues and jointly made positive contributions to world peace and development.

The political foundation for the past 70 years of friendly cooperation was mutual respect, equality and non-interferience in each other’s internal affairs. The experiences over the past 70 years has always proved that as long as the two sides abided by such a principle, the bilateral relations will develop smoothly, bilateral cooperation and exchange will be carried out smoothly. On the contrary, there would be difficulties and the cooperation between the two sides would be affected. Upon the 70th anniversary, we should keep the initial goal to surpass the political system and ideological differences between the two sides, root out the intervention and make joint efforts to push forward Sino-Swedish relations to healthy and stable development.

Q: In your opinion, in which areas can China and Sweden have more cooperation?

A: Currently, the Covid 19 is rampagnt in the whole world. Global economy slows down, there is a lack of driving force in economic increase, there are many unstable and uncertain factors in international environment. This has imposed a new challenge to all countries including China and Sweden. Opening up to the outside word is one of the fundamental policies in China. China has been insisting on opening up and achieving a win-win situation and committed itself to contributing to mankind’s common destiny. As the first cargo trading country and the second foreign investment destination in the world, China’s contribution to the global economic growth has exceeded 30 percent for many years. Facing the current global crisis, China has steadily resumed manufacturing and production, economic revival trend is stable and China has shouldered its responsibility in helping revive world economy. During the second quarter of this year, China’s GDP growth rate reached 3.2 percent. Import and export volume in July increased 6.5 percent compared with that of last year. It is predicted that during the later half of the year Chinese economy will continue to grow. This will provide more opportunities for Sino-Swedish cooperation. China and Sweden can have deep cooperation in high level manufacturing, biological, medical and pharmacieutical field, energy saving and environmental protection, green transportation and communication as well as smart city. Recently due to the Covid 19, medical care and health, transnational online shopping has seen an increase and can become new economic growth sectors. I hope industries in both sides should grasp the opportunities and actively tap the potential for solid cooperation.

Q: Can you briefly introduce China’s efforts and experiences in fighting against Covid 19?

A: Since the beginning of this year, Covid 19 broke out in many countries in the world becoming the most severe public health crisis in the world since the second world war bringing severe impact on the world on many aspects. Covid 19 also brought about unprecedented blow to China’s economic and social development. Facing such sudden and severe test, Chinese government insisted on prioritizing people’s lives and health among other aspects and launched a people’s campaign against the virus and put the virus spreading under control by comprehensive and strict isolation methods. 1.4 billion people acted in concert to isolate the virus by taking well coordinated measures to protect people’s lives and health. Meanwhile, China also well coordinated in pushing forward the work of controlling the virus and resuming the manufacturing orderly and steadily.

China insisted on new development idea and Chinese economy sees a good trend by turning from negative growth into positive growth of 3.2 percent during the second quarter becoming the first country in the world to realize the positive growth. China’s growth has injected confidence and driving force for the world economic growth.

Chinese President Xi Jinping stressed that mankind live in a common community. Unity and cooperation are the most powerful weapon for the international community to defeat the virus. Since the outbreak of the Covid 19, China has held on the mankind common community idea and supported many countries to fight against the disease. President Xi carried out a series of diplomacy with head of state in various countries and voiced his view of joining hands with various countries to deal with the Covid 19 together. China has donated 50 million dollars to the World Health Organization and provided emergency medical material to over 150 countries and international organizations. China will continue to take a series of measures to consolidate international cooperation in fighting against Covid 19. The measures include providing 2 billion dollars of international assistance, establish global humanitarian emergency stockhouse and communication hub, establish hospital cooperation mechanism and make the vaccine as global public product after the successful production of covid 19 vaccine in the future. China will resolutely join hands with the international community including Sweden to deal with the Covid 19 and establish mankind health community.

Q: What is your expectations on overseas Chinese in Sweden?

A: Chinese home and abroad are forever belonging to the same family. Since long time ago, overseas Chinese in Sweden have kept Chinese traditional morality, self independent, diligent and actively melted in the Swedish society and contributed to the Swedish social and economic development. Meanwhile, Chinese in Sweden also continue to carry on their Chinese culture and put up forward proposals for China’s development pushing forward Sino-Swedish friendly cooperation and exchange. I was impressed. When China encountered the Covid 19 in January, overseas Chinese in Sweden immediately organized donation activities to collect funds and buy medical products and some even help send the products to Chinese hospitals in person. China’s achievements in fighting against Covid 19 so far cannot be separated from overseas Chinese efforts. The motherland will never forget your contributions!

Since the outbreak of Covid 19 in Sweden, many overseas Chinese began to work hard for Sweden’s campaign against Covid 19. Many Chinese associations have actively helped each other and kept yourself healthy. Currently the virus is still spreading in the world including Sweden, I just hope that you continue to protect yourselves from being infected, while deeply melting into the local society, pushing forward Sino-Swedish cooperation and exchange in various fields and actively shouldering the responsibility of being a good bridge between China and Sweden so that bilateral relations will further develop. Your proposal, suggestions and efforts are welcome.