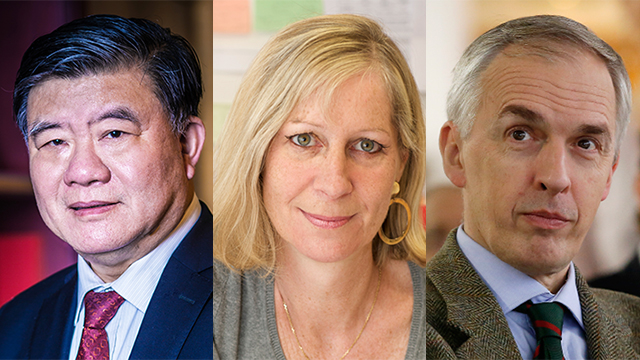 Stockholm, Feb. 6 (Greenpost)–The Royal Swedish Academy of Sciences has decided to award the Sjöberg Prize 2018 to

The Sjöberg Prize 2018, worth one million US dollars, is awarded to cancer researchers Zhu Chen, Anne Dejean and Hugues de Thé. They have succeeded in curing one of the deadliest forms of cancer using a unique treatment method that is based on arsenic and retinoic acid. This method shows how cancer treatment is becoming more targeted as we learn more about the mechanisms responsible for the disease.

This year’s Sjöberg Laureates have developed a new and targeted treatment for a specific form of blood cancer called acute promyelocytic leukaemia. It was once one of the deadliest forms of cancer, but it is now possible to cure nine out of ten patients who receive the new treatment.

The treatment is unique because it is the first standard treatment for acute leukaemia that does not include chemotherapy. Instead, a combination treatment is used, which consists of a form of vitamin A, “all-trans retinoic acid”, also called ATRA, along with arsenic trioxide.

The idea of using arsenic comes from traditional medicine, but this method has been scientifically tested and proven in this form. The Laureates have made this revolutionary development possible by methodically mapping the molecular mechanisms responsible for the disease. By identifying a specific genetic mutation and aiding the destruction of a faulty protein in specific cells, it was possible to stop the process that resulted in death for three out of four patients. This treatment means the cancer cells disappear because they lose the ability to renew themselves.

These discoveries have been made in stages since the 1980s, and the treatment’s effects have been confirmed in numerous scientific studies. In many countries, this treatment combination is now the first choice of treatment for acute promyelocytic leukaemia.

The three Laureates remain very active in the field of cancer research. Anne Dejean now primarily dedicates her research to continuing her studies of liver cancer, and to investigating the significance of protein modification in how cancer develops. Hugues de Thé is interested in the potential for producing treatment methods for cancer that combine stimulating the cancer cells’ maturation and blocking their ability to renew themselves, while Zhu Chen is investigating genetic and molecular changes in other forms of leukaemia.

The hope is that the Sjöberg Prize, which mainly comprises research funding, will pave the way for further progress, leading to cures for more forms of cancer.

“It is really a great honour for me to share with Dr. de Thé and Dr. Dejean the prestigious 2018 Sjöberg Prize, which recognises important contributions to cancer research,” says Professor Zhu Chen, Shanghai Jiao Tong University.

“This prize means not only the glory, but even more importantly a responsibility, a responsibility for me, my team and our collaborators to continue efforts in the understanding of disease mechanisms of other types of haematological malignancies and to develop innovative, effective therapeutic strategies against those diseases through collaboration with other partners,” Professor Zhu Chen concludes.

Anne Dejean, Professor at Institut Pasteur and Research Director at Inserm, comments on the Prize:

“I feel deeply honoured and, at the same time, very privileged to join the company of the prior recipients, whom I hold in great esteem.”

“This is a wonderful recognition of our contribution to the understanding of the molecular and cellular basis for a severe form of leukemia and its efficient cure, that will foster future development of highly effective oncogene-targeted therapies founded on similar approaches.”

“This is the recognition of thirty years of work that ends up in daily clinical practice, as well as more than twenty years of tight collaboration and friendship with the Chinese group.

“This prize also recognizes a certain vision of medicine, shared with Zhu Chen, that is based on curiosity and goes from clinical observations, uncompromising basic science and feedback, to patient care. Freedom to search is one of the founding values of Collège de France, my home institution.”

Further information about the prize

The prize is awarded by the Royal Swedish Academy of Sciences and funded by the Sjöberg Foundation. The foundation was founded in 2016 by businessman Bengt Sjöberg, who donated two billion Swedish krona for the purpose of promoting scientific research that focuses on cancer, health and the environment.